The latest in 'Campfire Gaming'.

Davies, we love you, hero of the human race/

Davies will save us from the aliens in outer space/

Davies, no pressure, but humanity dies with you!

Children across Earth are singing this song. It’s a song about the one man who we all depend on: Colonel Davies. It’s been a long road, but this is it. Almost everyone is dead, and one hero remains. As a rookie he served with some of my very first XCOM operatives. Now, as a colonel, he’ll lead Earth to victory or defeat.

This is humanity’s last stand. This is XCOM Part 4.

Danger! There be spoilers ahead! This article is about the final missions of XCOM, and as a result is going to contain more spoilers than my last XCOM articles.

If you recall, the last article was pretty much me getting my ass handed to me by the aliens. Most of my best soldiers were killed, but Davies, a British operative who has been around almost since the beginning, has learned he has psychic powers.

XCOM has extended satellite coverage to the United States, Canada, Mexico, Egypt, Nigeria, England, Russia, France, Japan, India, and Australia and all eleven countries are heavily funding us now. I use the money to make sure every member of  the unit has a plasma weapon, the best kind available. I buy new armor. Now my sniper has a jet pack, my assault has a cloaking device, and my other assault (that’s Davies) has a psi suit that increases his psychic abilities.

Argentina, Brazil, South Africa, Germany, and China have left the XCOM project. If I save the world I’ll be sure to call up the leaders of each country and gloat. If I fail, well, we’ll all be dead anyway.

The new team’s first assignment is handed in, and it’s bad news. A terror mission in Bangalore. Aliens are on the attack and citizen’s lives are on the line. Davies gives the team an inspiring speech.

“Everyone I’ve ever known is dead. Everyone I’ve served with has died a gruesome death, and now I’m about to serve with you people. Wait… what was I talking about again?”

My sniper climbs up to the roof of a building to get a better view of the area.

Here’s what he sees. 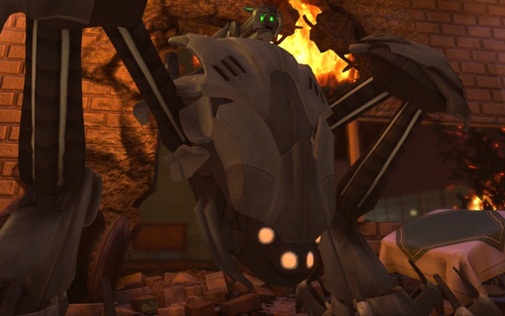 Those things have heavy armor and can shoot twice in one turn. My sniper climbs back down the building with tail firmly between his legs.

He and two other soldiers convene at the bottom of the building with the plan of climbing back up and shooting a volley at the robot together. Meanwhile the others are running around shooting easier aliens and saving civilians. As the team of three chit chat about how best to take down the robot, a large shadow appears overhead. They look up and see this. 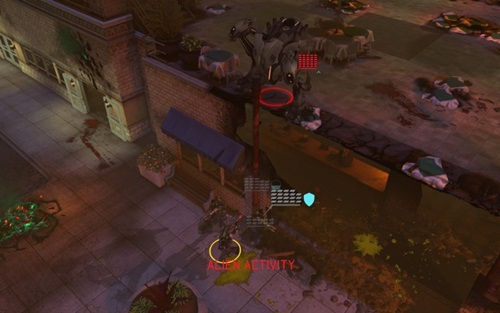 “You ever get the feeling you’re being watched?” 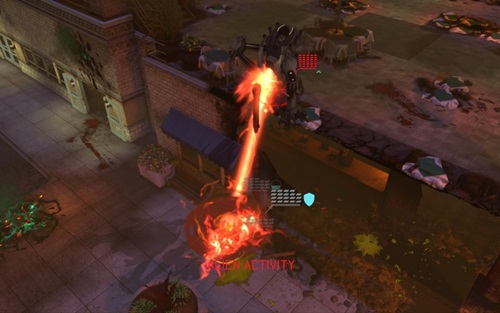 “You ever get the feeling you’re being burned alive?”

I honestly didn’t think the robot would chase them down like that. No one dies but they’re all pretty horribly wounded. That’s when Davies shows up, right on queue, right behind the robot and kicks ass as per usual. 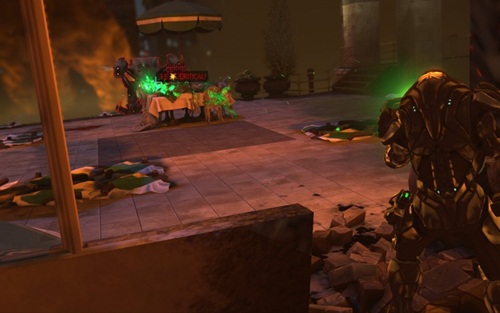 Davies knows the best way to win a fight is to shoot your enemy in the back when he’s not looking.

And the mission is over.

That went… really, really well. I know. I’m scared too.

Actually, with the new equipment and with Davies at the helm the group performs brilliantly in every operation without losing anyone. The old team of elites was killed by a psychic alien that we’ve never seen before. I consider this next missions as training to take that alien on once again.

Here’s a montage to illustrate my point. If you have Eye of the Tiger available play it now. Otherwise just hum it until your roommate starts giving you dirty looks. 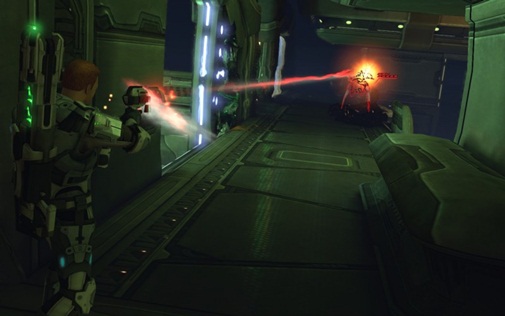 It’s the eye of the tiger 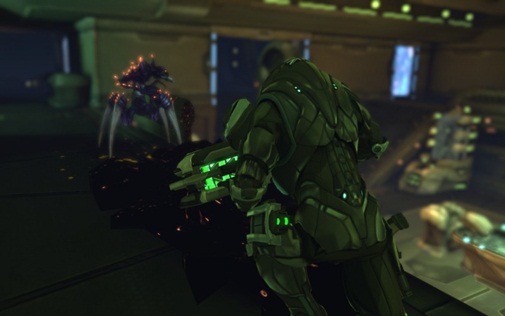 It’s the thrill of the fight 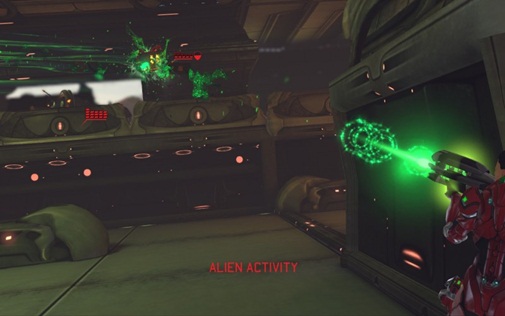 Rising up to the challenge of our rival 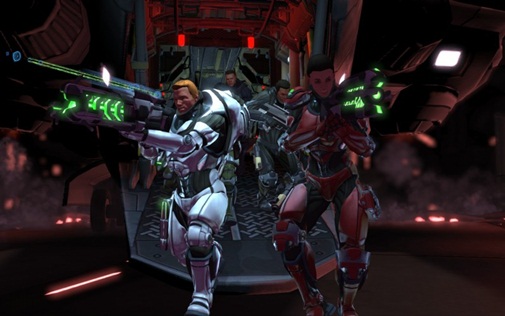 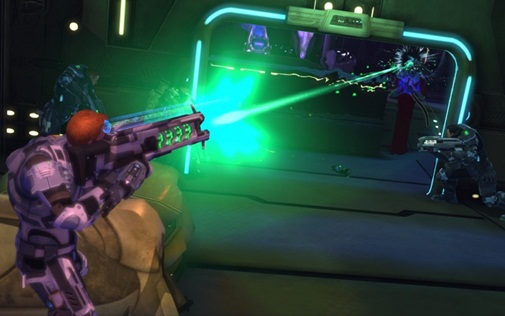 Something something eye of the tiger!

If I could end the montage with the whole team high fiving I would, but you get the picture. The point is things are going well, and before I know it, it’s time for the final mission. You may have noticed at the end of the montage my sniper blowing off the head of the psychic alien that killed my entire team not long ago. The new team killed him without losing a single operative. The psychic alien was holding a device that would allow us to locate the mother ship. The only problem is we need someone with psychic abilities to operate it.

He uses the alien device and finds the mother ship, then leads the charge inside. This is it. His final mission.

The final ship has you fighting every alien type in the game, and once again the team is flawless. We fight our way through the ship with no problems at all. And then we get to the alien leader. Disappointingly, it’s just another one of those tall psychic guys that we’ve already encountered before (I was hoping their leader would be something new and terrifying). The way things have gone, this should be an extremely easy final battle.

My assault guy flanks to the right. Davies takes the left.

And runs into another psychic alien. It mind controls him. The aliens have Davies!

Davies shoots the medic dead! No! My assault guy runs into a third psychic alien! It mind controls him! Crap! He shoots my sniper dead! Oh no! OH NO! The first psychic alien mind controls my heavy gunner! WOW, THIS REALLY COULDN’T BE GOING ANY WORSE!

My heavy gunner shoots my other heavy gunner dead. Three dead and three under the alien’s control and the mission ends. I’ve failed.

Wow… that was… horrible.

I assume I’ll have to train a whole other team up and try again (I’m not sure I’ve actually mentioned this, but I’ve been playing on ironman mode, which means I only get one save file that autosaves over itself automatically). But the game cuts me some serious slack. It starts me at the beginning of the mission with Davies and the rest back to life.

The team marches back through the ship and snipes the alien boss on the first turn, killing him instantly. The good news is the world is saved. The bad news is it was somewhat anticlimactic.

No, no, don’t thank me. Sure, I’m the commander in charge of the organization that just saved the world. But the real hero is Davies, the man on the front line, and the men and women he served next to. They’re the ones who should get all of the praise.

And me. Mostly me.

I’m Robert Green. For more of this sort of thing, go to RobertGreenStories.com