A decade after its debut on the PC, Carnivores: Ice Age has reappeared as a Minis game on the PSN. For the uninitiated, it’s a shooter with the sole intention of gunning down various beasts with an array of weapons, and accruing a high score depending on your hunting prowess. 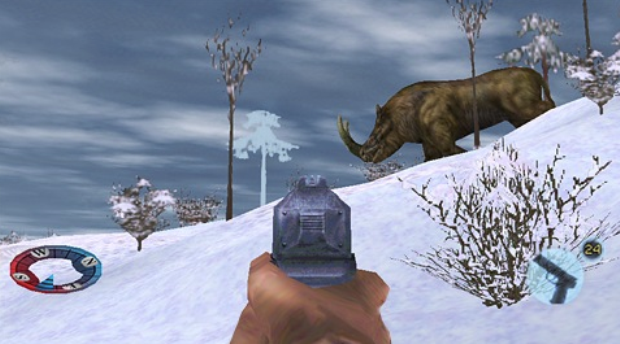 Embark on an ice safari and hunt down those beasts

Carnivores throws you onto a recently-discovered planet on an ice safari with only your gun, map and a few essentials such as camouflage and tranquilisers for company. You’ll have to be on your guard though as the mammoth, woolly rhinoceros, saber-toothed tiger and prehistoric birds are among those all too keen to ensure you don’t make it back home.

It claims to be a “true-to-life hunting experience” but it’s fairly hard to get the enthusiasm pumping based on its visuals, which are basic at best. Blocky and downright ugly at times, this isn’t going to win many prizes. Look beyond the basic, however, and you’re left with a fairly enjoyable, yet hugely repetitive, title. 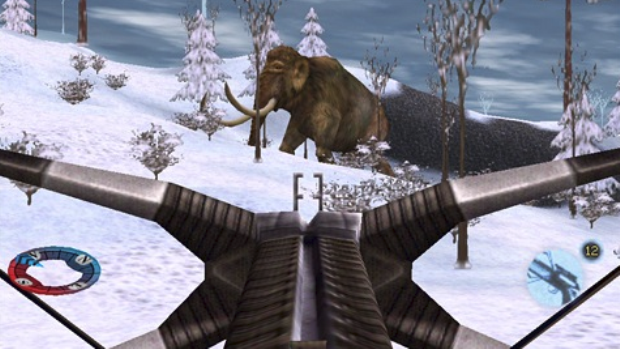 I’m not particularly fond of animals, and have never had any qualms picking up a virtual rifle in various hunting games and shooting an unsuspecting forest dweller. For me then, the idea of roaming the desolate icy wastelands was initially quite appealing. Problem is, unless you put the time in, it really is deathly dull. The drab graphics, weak sound effects and monotonous gameplay may leave you as cold as the lifeless carcasses that will soon be dotted about the landscape. Tracking, stalking and then shooting your prey really is a time consuming affair. Movement is as painfully slow as the maps are large, meaning that making your way around each location is tedious in the extreme. You can trudge through five varied environments searching for some ravenous beast to kill. Sadly the shoddy looking foliage, angular hills and poorly drawn animals don’t exactly help build the atmosphere.

The maps vary from easy to dangerous – with each ramping up the size and aggression of your adversaries. In McRath Island (icy terrain and snow) and Ravaren’s Bridge (full of lakes, swamps and pine trees) there’s little that should unduly worry you. The predators don’t pose too much danger unless you’re fairly reckless and run in all guns blazing. Other settings include Ring of Infernus (tundra and beaches), Dry Nodus Lake (swamp, glaciers, canyons and rivers) and The Giant’s Boot (lakes, forests, hills and some extremely dangerous creatures!). 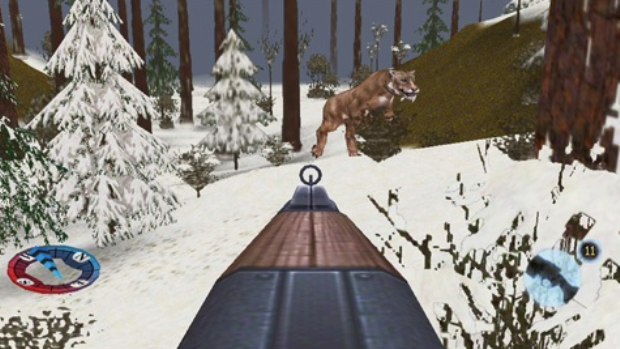 Points are awarded depending on how well the hunt goes

Eventually you’ll move on from the standard pistol, which makes things a little easier – and slightly more fun; there are seven weapons at your disposal including shotguns, a crossbow and a sniper rifle. Points are awarded depending on how well you do and the positioning of the shot.  Should you opt to use the camoflage, radar, cover scent or tranquilizers on a mission, it will affect your total score after a successful hunt.

Even when it was first released 10 years ago on the PC, Carnivores: Ice Age could only muster a mediocre score. Sadly, time has not been kind. It does have a cheap price on its side but beyond that, it’s not a game that will keep you glued to the screen. Some things are best left in the past – this is one of them.

There are various weapons on offer and some of them are reasonably enjoyable to use. Shooting a huge ice age beast is satisfying. The game is inexpensive.

The graphics are awful, the sounds simplistic and the fun factor is limited. Movement is painfully slow and it's not exactly a game that will get your adrenaline pumping.

Final Verdict:
BAD
It may be a Minis game but that's no excuse for it being little fun to play. It claims to take you on a realistic ice safari... if ice safaris are boring and fairly uneventful, then it does the job.
A copy of this game was provided by Developer/Publisher/Distributor/PR Agency for review purposes. Click here to know more about our Reviews Policy.