The latest handheld Castlevania game is like nothing that came before it.

When Mercury Steam, under Kojima’s watchful eye, rebooted the Castlevania continuity in 2010 and brought the series into the third dimension successfully where so many previous attempts had failed, many lauded them for finally making a good, 3D console Castlevania game. However, a more common sentiment was outrage: whereas Lords of Shadow was a competent 3D game, and a perfectly serviceable action game, most people felt that in their haste to make a God of War clone, Mercury Steam had completely lost what makes Castlevania Castlevania.

The fact that Mirror of Fate falls in this continuity automatically creates problems for the title from the get go, bringing this entire baggage upon it before the game has even been booted up. The problem is exacerbated when one pauses to consider that traditional Castlevania has had an incredibly rich heritage and history on Nintendo handhelds, with the trilogy of GBA games, and especially the trilogy of DS games winning accolades from fans and critics alike everywhere. The fact, then, that Mirror of Fate is such a visible departure from the games that immediately precede it only compounds these issues.

And yes, I will say this at the outset: if you go into Mirror of Fate expecting traditional Castlevania, anything like the GBA and DS games have been, then you will come away sorely disappointed. Whereas Mirror of Fate succeeds in retaining core elements of the series much better than the original Lords of Shadow did, it is still by and large its own thing. Go into the game, however, expecting what Lords of Shadow set you up to expect- an excellently made action game, with some incredible production values- and you won’t be as let down. 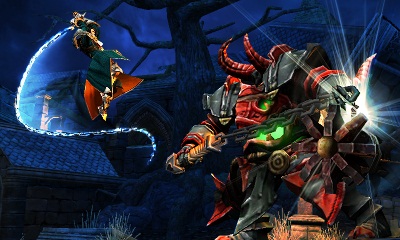 The story of Castlevania: Lords of Shadow: Mirror of Fate is set 25 years after the original game, at least to begin with.It jumps around in time a lot, and actually moves backwards, detailing cause after effect. Coupled with the fact that it also completely switches perspectives between three primary characters- Simon, Trevor, and the ever elusive Alucard- it makes for some refreshingly unique storytelling, that keeps you on your toes as much by the novel and inventive ways it is told as it does via what happens. As for that, without spoiling anything, I’ll just say, the narrative speeds towards a thrilling and rather unconventional conclusion, although a whole lot of players might be able to guess what the big twist is beforehand because of how often Mirror of Fate shows its hand.

It all doesn’t matter, though. it’s a great story, and it keeps you guessing more often than it doesn’t. It’s certainly a more inventive Castlevania story, actually choosing to focus on its characters somewhat rather than just recounting their struggle against Dracula. Make no mistake the epic nature of the story doesn’t feel downgraded or anything. Rather, it feels fleshed out because of the character development that Mercury Steam’s new approach to storytelling affords them.

Almost as refreshing as the story and its structure itself is how the story is told. The game adopts a still, 3D graphic novel cinematic cutscene style (resembling the movie 300, or the original God of War game), and these are perhaps the best looking portions of the game, looking highly stylized, and rather expressive and emotive as well.

These are also perhaps the only sections of the game that benefit from the 3D effect (but more on that later), and they are backed with some consistently good music and voice acting. The only thing that stands out as being jarring is that the actual voice clips do not match lip movements at all: the lip movements are generic, and almost never sync with whatever is being said by the character. I don’t know what the reason for this was- maybe they were trying to go for a universal lip movement, to ensure consistency across all language versions of the game. Or maybe it’s a stylistic choice, to further channel the graphic novel aesthetic the cutscenes adopt. Be that as it may, it’s highly distracting, and even detrimental at the beginning of the game. 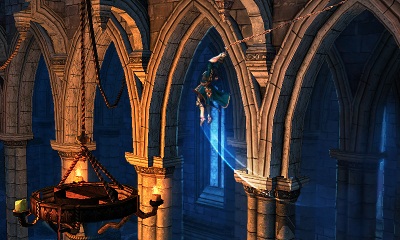 Of course, not many will actually play Castlevania for its story, good as it may be. Most people play Castlevania for its immaculate platforming, and for its famed ‘Metroidvania’ design. Those people will largely be disappointed. Whereas the game follows a non linear progression (and right from the outset, it throws sections of the map very obviously inaccessible until later at you), it is nowhere near as intricate as the GBA and DS games were. There’s hidden passages and some backtracking, but on the whole, little incentive to actually go out of your way to explore. Similarly, while the game has some tight platforming, with some interesting hooks, such as grappling, thrown in, and the world you are traversing is itself a fairly interesting looking one, once again, it does not hold up to the previous entries.

Don’t get me wrong, the platforming and the exploration on their own merits are pretty great (and certainly better than most AAA console releases these days, including the original Lords of Shadow); the problem is that it is impossible to assess Mirror of Fate in a vacuum. If your point of reference regarding these elements is the original Lords of Shadow, you might be pleasantly surprised at how much more open and varied this game is (including its penchant for the occasional puzzle, some of which can be really stumping). But if you were comparing this to the other handheld Castlevania games, then you would find yourself gravely disappointed. 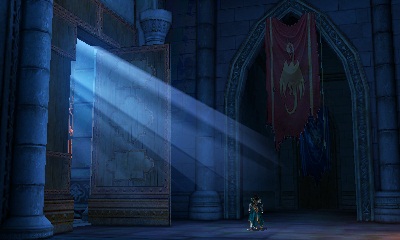 The one area where Mirror of Fare indisputably shines is the combat. More than perhaps anything else, this game works as a great action game. Using the same two button attack scheme that made the God of War games famous, you are asked to chain together strings of attacks to take out enemies that you may encounter. There are a multitude of combos available to you, and more are unlocked, as you level yourself up. Combat is kept exciting with the grab/block/stun abilities, as well as the inclusion of magic and secondary weapons. The game keeps things thrilling by having you battle hordes of enemies as you try to accomplish some really precarious platforming.

The boss battles in the game are a thing of beauty. The bosses are huge and intimidating, and the perfect mix of dexterity and timing is required to bring them down. Every boss battle concludes the same way: in a rather cinematic God of War style QTE. Whereas it feels fresh and exciting the first few times, it begins to feel grating by the end of the game. It also doesn’t help that Mercury Steam sprinkled the game with QTEs so liberally. 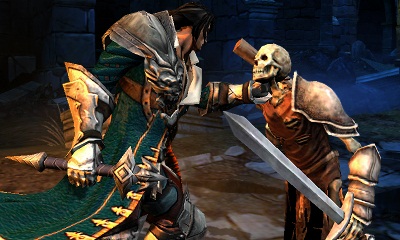 Mirror of Fate is a stunner. It looks exceptionally good on the 3DS screen (screenshots won’t do it justice), especially during the cutscenes, and holds a steady framerate (even though said framerate seems to be locked at a low ~30FPS, causing some of the more exaggerated character animations to look ridiculous); the 3D effect adds some really delicious visual depth to the image on lower levels. I say lower levels because at maximum, the 3D in this game will make your eyes bleed. The effect is painfully strong, and absolutely impossible to maintain, leading to cross images, and interference and distortion. It works much better during the cutscenes, but while you are actually playing the game, you’d be well advised to keep it around the 40% mark.

In the end, there will be as many people disappointed by Mirror of Fate as there are who can appreciate it. What you take away from this game depends entirely on whether you assess it for what it is, or for what it is not. Because this is not a traditional Castlevania game, not in the way it handles it world, traversal, combat, story, storytelling, anything. It is the perfect distillation, rather, of the Lords of Shadow formula, and a realization of that distillation into 2D.

It is also an incredibly fun and accessible action game, and one of the most well made handheld titles around. Whereas unlike previous handheld Castlevania games, Mirror of Fate isn’t even close to being the best game on the system it is on, it is still great fun, and anyone with any appreciation for the Castlevania license who doesn’t mind the developers taking liberties with it, or anyone in the market for a fun action game in the vein of the original Lords of Shadow, should definitely check it out.

The story told here is great, with some interesting characters and a rather unconventional twist; the storytelling itself, with its non linear approach, is well handled; great graphics, great music, great voice acting; well produced, stunning cutscenes; a deeply satisfying combat system; great boss battles; the game manages to keep things thrilling and exciting by mixing in some tight platforming with some tense combat situations

The game is nothing like traditional Castlevania games, and differs from them in every regard from the combat to world design to exploration to platforming to the story and lore; the framerate, while steady, is almost painfully low sometimes; the 3D effect is painful; the game often gets heavy handed in foreshadowing the ending, meaning the more savvy player is likely to guess it before it actually happens; overreliance on QTEs

Final Verdict:
SUPERB
Castlevania: Lords of Shadow: Mirror of Fate is like no other Castlevania game that came before it, but it manages to be a deeply engaging and satisfying action game nonetheless.
A copy of this game was provided by Developer/Publisher/Distributor/PR Agency for review purposes. Click here to know more about our Reviews Policy.