Games are usually about destroying things and having fun while doing so. Catastronauts then is quite unique in that it is about defending your ship while an enemy attacks. The focus here is on cooperating with your teammates so that your ship doesn’t sink!

To learn more about the game and its development, Gamingbolt reached out to Inertia Game Studios’ Kierran Newland who answered the following questions. 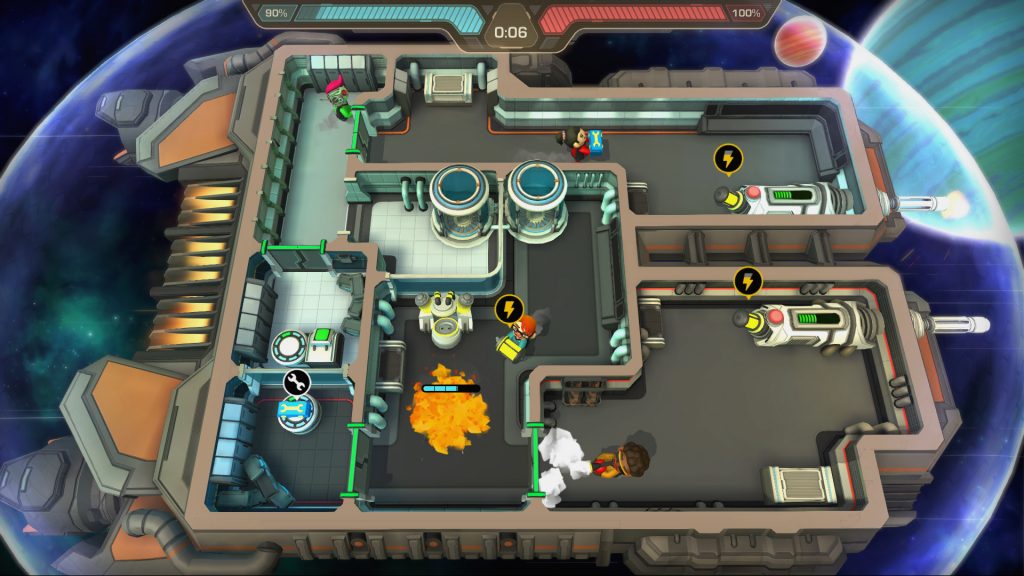 "The main concept is to have the players engage in a range of tasks that don’t become too monotonous or boring."

The idea of Catastronauts is quite unique as it tasks you with managing a ship amid chaos, rather than being the ones attacking. What inspired this idea?

The players need a constant supply of unique mechanics to keep them occupied during the process of playing a Catastronauts level. We realised during the prototyping stage that inflicting an enemy attack against our ship gave us a wider pool of tasks to choose from… Characters could be putting out fires or fixing cracks whilst another could be shooting the laser cannons or teleporting an item. The main concept is to have the players engage in a range of tasks that don’t become too monotonous or boring.

One of the main features of a party game is the easy accessibility while still keeping tensions high. How did you aim to achieve this with Catastronauts?

Making sure it’s as easy as possible to jump into a game of Catastronauts is very important to us. We’ve had to throw away many concepts during the prototyping phase which we’d hoped would be a great experience, but ultimately proved too difficult to control or hard to understand when play tested. Catastronauts only requires three buttons to play which makes it easy to pick up; this has allowed families at events to get into the game much more quickly and easily.

Is the game still as engaging in a single-player mode? If so, how?

Single player mode allows you to take control and switch between two characters so you can still attempt any task that requires player cooperation to complete. Catastronauts addicts will find this mode a great opportunity to master the game without having to rely on other players.

Were there any particular challenges you faced during this game’s development?

We wanted Catastronauts to appeal to a wide range of players regardless of age so I can honestly say that the biggest challenge for us was accessibility. A good proportion of the development was taken up with prototyping mechanics that were fun but easy to understand. Compiling the mechanics into playable levels created more challenges, balancing the difficulty became a struggle – with even the tiniest of tweaks making the levels either too easy or too difficult.

What are the different kinds of disasters players will have to deal with aboard the ship?

The trailer for Catastronauts demonstrates some of the challenges that players will have to face. All levels will include fires and ship damage in some capacity. Other challenges include Electromagnetic Pulses (EMPs) – which drain your weapons and play havoc with the automatic doors – Intermittent Solar Flares which will turn your characters to toast unless you get them to the safe room first, and teleported enemy bombs – you will need to dispose of these quickly otherwise they will explode causing all sorts of problems. These are only a handful of the challenges that we have planned; the others are currently top secret! 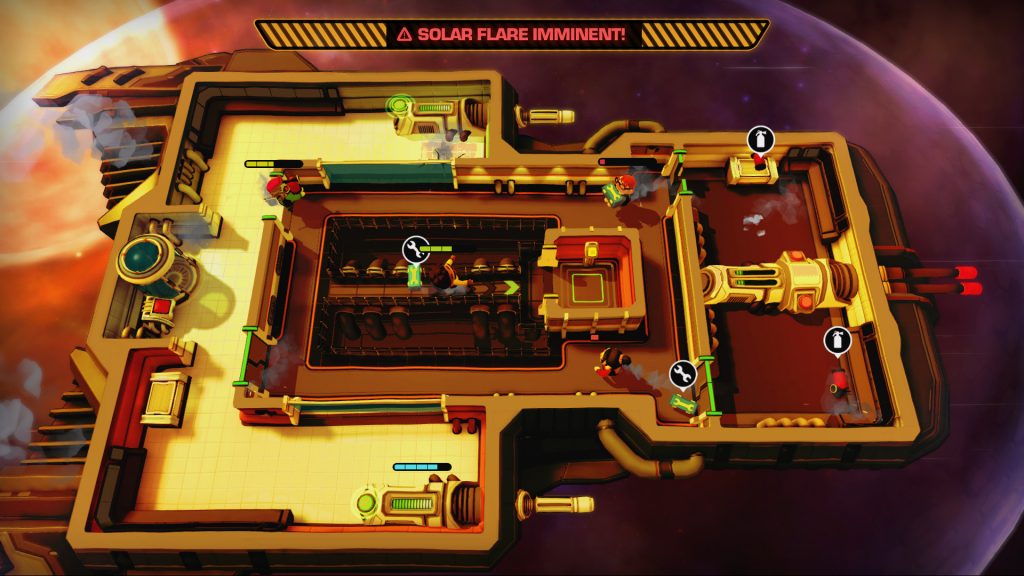 "We have tried to keep the visual style of Catastronauts simple so that the mechanics within the levels are easy to read. For example a green button can be activated, whilst a red button cannot."

The game’s mechanics also allow for the possibility of messing with your teammates. Was this intentionally included?

I think the mischievous element of messing with other players can actually add an angle of fun to the game. So, yes! – You could say that we were aware that some mechanics would be exploited by players to troll others. A good example of this would be opening the extraction door to extinguish a fire. If a fellow player is minding their own business in the cargo bay then a quick push of the extraction door button will see them sucked into space!

The gameplay looks really fast-paced and frantic. How have you ensured that it doesn’t become too confusing for players?

We have tried to keep the visual style of Catastronauts simple so that the mechanics within the levels are easy to read. For example a green button can be activated, whilst a red button cannot. New challenges and mechanics are introduced gradually as the levels progress; this gives the players time to get used to any changes. We have also witnessed (during play testing) that players will help each other out if a member of the team is struggling, which is a big bonus with this kind of party game.

What can you tell us about the different levels in the game?

During the level design process we have tried to keep each level feeling unique. Earlier levels will gradually introduce new mechanics whilst later levels will revisit previous ones but have exciting new twists applied to them. This should keep the game feeling fresh and fun.

What are some of the games that inspired Catastronauts?

We went through a phase of playing Overcooked at the office which was how the Catastronauts concept was born. The teamwork aspect of Overcooked was of particular interest; we really liked the way it made communication mandatory to win levels. We have a few sci-fi enthusiasts at Inertia so games such as FTL, Lovers in a Dangerous Space Time and Spaceteam are also favourites of ours, and as such have helped influence the artistic style of Catastronauts.

We are not planning to enhance the game for PS4 Pro or Xbox One X – so performance wise we should be looking at a solid 60fps at 1080p, the same as the Xbox and PS4 versions. 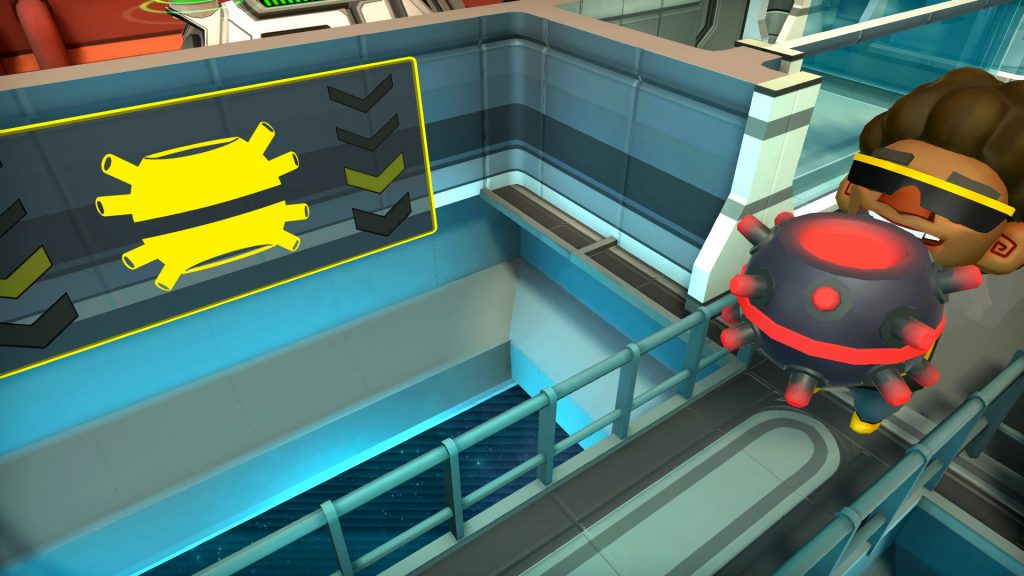 "The Switch is a less powerful console so we’re aiming to release Catastronauts with it running at 30fps; we’re expecting for 60fps on all other platforms."

Given that you are now working on both the PS4 Pro and Xbox One X, what kind of technical differences did you find between the two?

I’m not sure legally how much I can talk about these… Broadly speaking each platform has its own little issues that we’ve had to overcome. It took a little longer to get the Xbox up and running, but nothing that caused us too much hassle.

How different will the Switch version be different from other platforms?

The Switch is a less powerful console so we’re aiming to release Catastronauts with it running at 30fps; we’re expecting for 60fps on all other platforms. There are some graphical optimisations that we are having to make, but nothing that will change the overall appearance of the game.

I can understand why some companies implement microtransactions as they can contribute to a large percentage of the games revenue. At the end of the day microtransactions are a tool and it is how the tool is used that dictates whether the monetisation practise is questionable or not.

I know as little as anybody else about this topic. I imagine they’ll either continue with updated and improved hardware using their current platforms or they’ll develop a new generation with a whole bunch of fancy new features!

From a developer perspective, do you think the next-gen console era will be the 4k/60fps era?

I play a lot of PC games where the option to play at a solid 60fps is standard. My main gripe with the current generation of console is that a lot of games are capped at 30fps. I hope to get to a stage where all games on the next-gen consoles run at 60fps.