Gather ‘round children, and let’s hear a story. A story about burly white guys on planet Greybrown, shooting the foreign enemy force to the rhythmic tones of marching boots and militaristic booming fanfare. This imagery has become far too familiar over the course of generation seven, when the Xbox 360 rose to power. With Mr. Shooter suddenly skyrocketing in popularity, his lovely young muse and business partner Ms. Online play suddenly moved in, leaving Mrs. Local to sleep on someone else’s couch. Things weren’t always so, there was a time before when colour was king and when you wanted to play with friends, someone brought over the Doritos and the trash talk ensued without the involvement of a headset. Multiplayer used to mean Multiplayer.

Enter Cel Damage, the antithesis of everything now normal. The bizarre and barebones plot is established within thirty seconds as a wacky TV show, taking the piss out of programs such as Comedy Central’s “Drawn Together”, as well as general saturday morning cartoons and product tie-ins. The zany cast of characters embody many tropes and styles, each with a unique and somewhat funny personality and excellent voice acting. While being serviceably minimal in plot, the cel shaded art style the original game wore so on it’s sleeve that it made the title of the game holds up excellently, and Cel Damage feels like a living cartoon that can only be described as the glorious lovechild of “Twisted Metal” and “Itchy and Scratchy”. 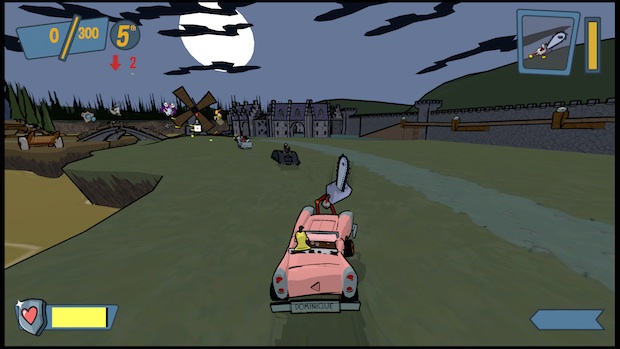 "Like any good cartoon, Cel Damage doesn’t let silly things like physics get in the way of its fun."

Like any good cartoon, Cel Damage doesn’t let silly things like physics get in the way of its fun. Cars twist and undulate with turns and the wide variety of the cartoon weaponry feels impactful and unique. While all the drivers move the same, they each get a unique weapon that mixes up their play style and goes with there personality. There are a meagre three game modes to Cel Damage and twelve maps across four visual styles in which to play them, leaving the game feeling rather wanting for playgrounds to unleash your havoc.

Regardless of whether you choose to play the basic gate races, the capture the flag mode or the completely insane “Smack Attack” arena mode, the carnage is kept lighthearted. Loony Toons-esque effects like hanging over a sheer cliff for a moment before a plummet or slowly sinking into water create a style to the chaos, while the manic action of all these cars barreling around the arena manages to feel like a huge dust-cloud punch up without making the action impossible to follow.

Just so the fans can have the thrills of putting foes through the wood-chipper anywhere, Cel Damage HD offers itself up on all current Playstation Platforms for the single purchase. The controls are simple enough to not feel cramped by the Playstation Vita, nor are the visuals too demanding that the game won’t run flawlessly on whatever you might decide to play it on. 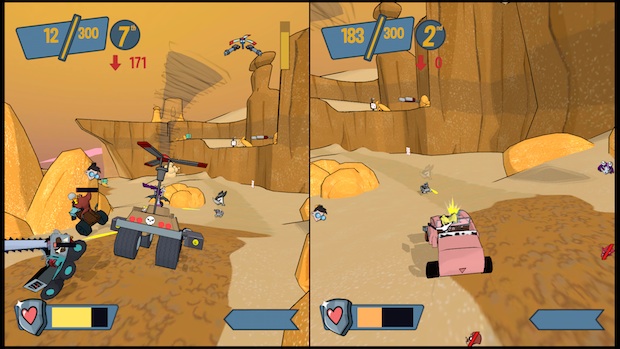 "the complete lack of any online functionality leaves more secluded or older gamers…left hanging on what still amounts to a rather anemic offering."

The cross save functionality works flawlessly, never needed any input on the player’s behalf to pick up your progress on whatever console you might have at hand. However, it curiously splits the trophies into a list for the console and a list for the handheld, creating sync problems for no apparent reason, even though it is easily ignored.

Taking Cel Damage for what it does do, it’s a great time. It’s what it doesn’t do however that leaves an overall taint of disappointment over the package. While an argument could be made that Cel Damage is best served by having three friends on a couch, the complete lack of any online functionality leaves more secluded or older gamers who can’t have friends come by too often left hanging on what still amounts to a rather anemic offering.

Any single player component is just the multiplayer mode without company, and the only rewards for punching through with each character are more weapons and a handful of brief cutscenes, though they might send you through a few dozen matches worth of motivation, the pool dries up fast regardless of how funny one might find them. The Vita version of the game doesn’t offer any sort of multiplayer at all, limiting the title even further to platform fans until it’s just a time killer, good until you get home to the real consoles.

Overall, Cel Damage is a great proof of concept and could really do great things with a sequel in this day and age. The amazing presentation and unadulterated fun of the gameplay does little to help the odd handling of cross-platform features and unfortunate lack of ambition, time or whatever to even go as far as online play. That lack of drive alone really kills any longevity for all outside of grade school or a collage dorm, and makes Cel Damage hard to recommend to anyone but the fiercest of couch warrior clans.

Cel Damage has a great core concept that would be great to see explored further, but that glorious promise just makes it more of a shame that Finish Line Games for whatever reason couldn't take it to that next step. As it is, Cel Damage is a hard sell to those without a strong core group of people to play locally.