Citizens of Earth is a fun game to play, in spite of its numerous issues. The game is riddled with a lot of problems – and the problem is, I’m not even sure if the problems are accidental, or if they were deliberately put in, to better emulate old school JRPG design, and pay homage to it, as this game does in every other aspect – but I still found myself looking forward to playing it, and enjoying its raucous story and tongue in cheek humor.

Citizens of Earth is set up to play like a modern interpretation of SNES JRPGs. Specifically, the game plays a lot like Nintendo’s quirky cult classic, Earthbound. A lot of the inspiration is almost immediately apparent- you have the same kind of alien invasion story, the same bright, colorful palette for the artstyle, the same kind of bright and cheery soundtrack, and the same kind of pop culture references and deadpan satire as that game. 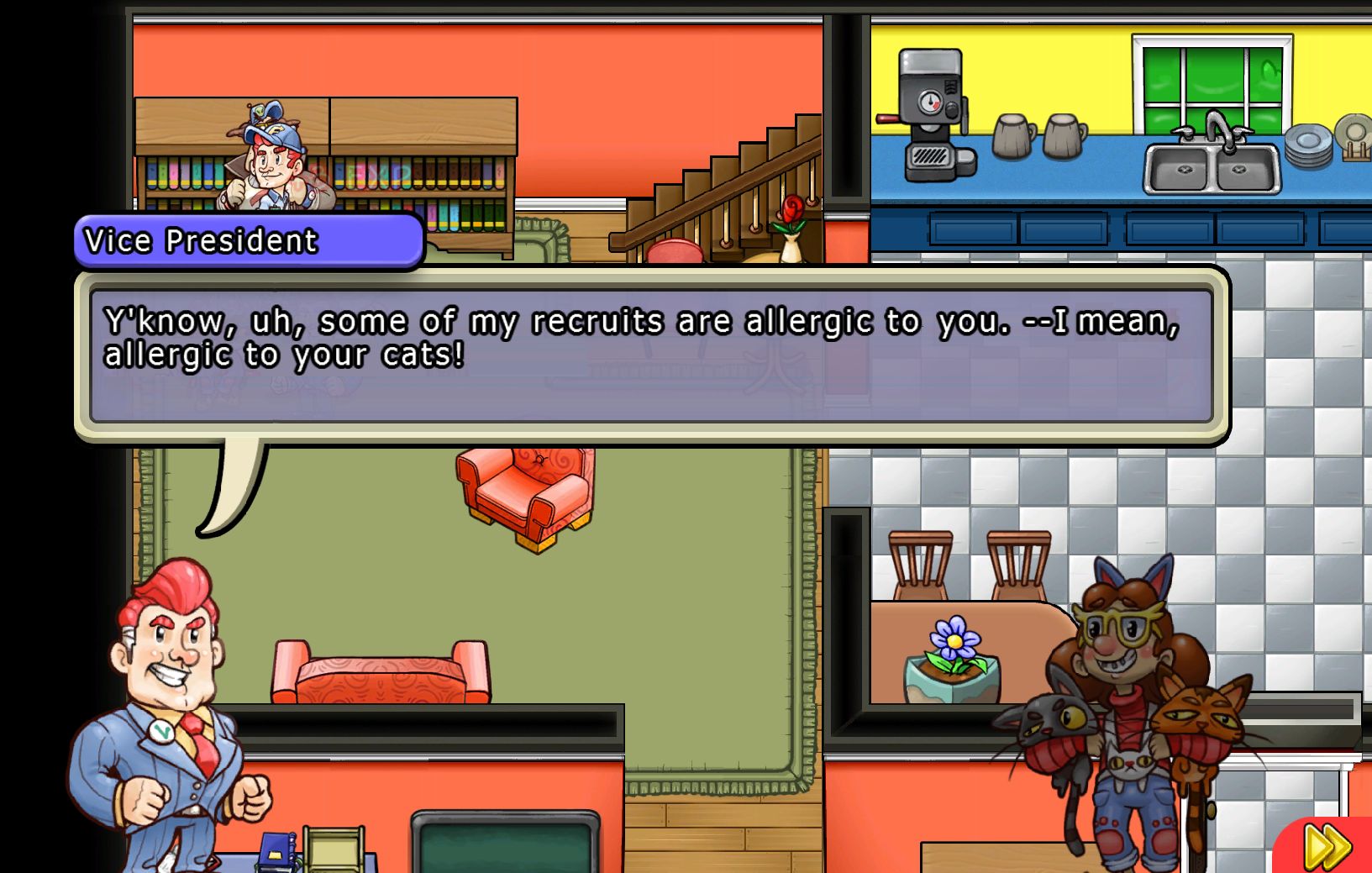 And what satire and pop culture references they are- the game is filled to the brim with puns, bad puns, good puns, puns that legitimately make you laugh at out; subtle references to other popular works in media abound, while the game doesn’t shy away from taking jabs at modern capitalism (the villain of the game is Moonbucks Corporation, which has made its name by selling coffee- hey, I told you, it’s not always subtle), and more gleefully, just taking jabs at politics and politicians in general.

For instance, the main character in the game is the Vice President of the Earth (don’t ask). However, in a twist that is genuinely amusing, he never actually participates in the game’s multitude of turn based battles- the various other party members that you recruit over the course of the game all do the actual work, while the Vice President just stands there in the corner, making wisecracks and quips as you fight.

And those fights are fun, too- Citizens of Earth has a fairly standard battle system, being turn based, and centered around the classic old school tradition of buffs and debuffs, energy costs and attacks, but a lot of neat little touches make the battles fun. The most amusing is how the characters’ actions correspond so well to their profession- apart from the Vice President just standing by the side and ordering people around, you have ‘buffs’ going to the bodybuilder (which is one of this game’s better puns, honestly, I giggled for a few minutes when I realized what the game had done there), or the computer coder using hexadecimal code to attack enemies (again, the picture of a real life coder just rattling off computer code at normal people as they walked by, and just terrifying them into submission made me giggle). It also helps that battles are fast– even if you don’t necessarily find yourself in the mood to appreciate all of their quirks, at least you can blaze through them quickly.

All of this is fun enough that you actually enjoy your time with the game, in spite of its considerable flaws, most of which stem, I suspect, from its reverent homage to Earthbound. The main issue is just how obtuse the game can be sometimes- players and fans of classic JRPGs will remember annoyingly cryptic hints that old games would drop at you as ‘quests’ or objectives, which would require hours of aimless wandering, even as you seemingly did what the game told you to do, and a complete inability to progress unless you made some amazing leap in logic to actually do what the game had intended for you to do, but simply refused to (or been unable to) communicate to you.

That’s what Citizens of Earth does- its objectives are vague at the best of times, with no specifics given to you (for instance, find x person or object. That’s all it will say, without even giving you some context as to where x person or object may actually be)- and even when you are seemingly in the right spot, the next part of the game often does not trigger, because you didn’t do things in the intended order, or missed doing something arcane and obtuse and stupid that game never told you you were supposed to be doing in the first place. 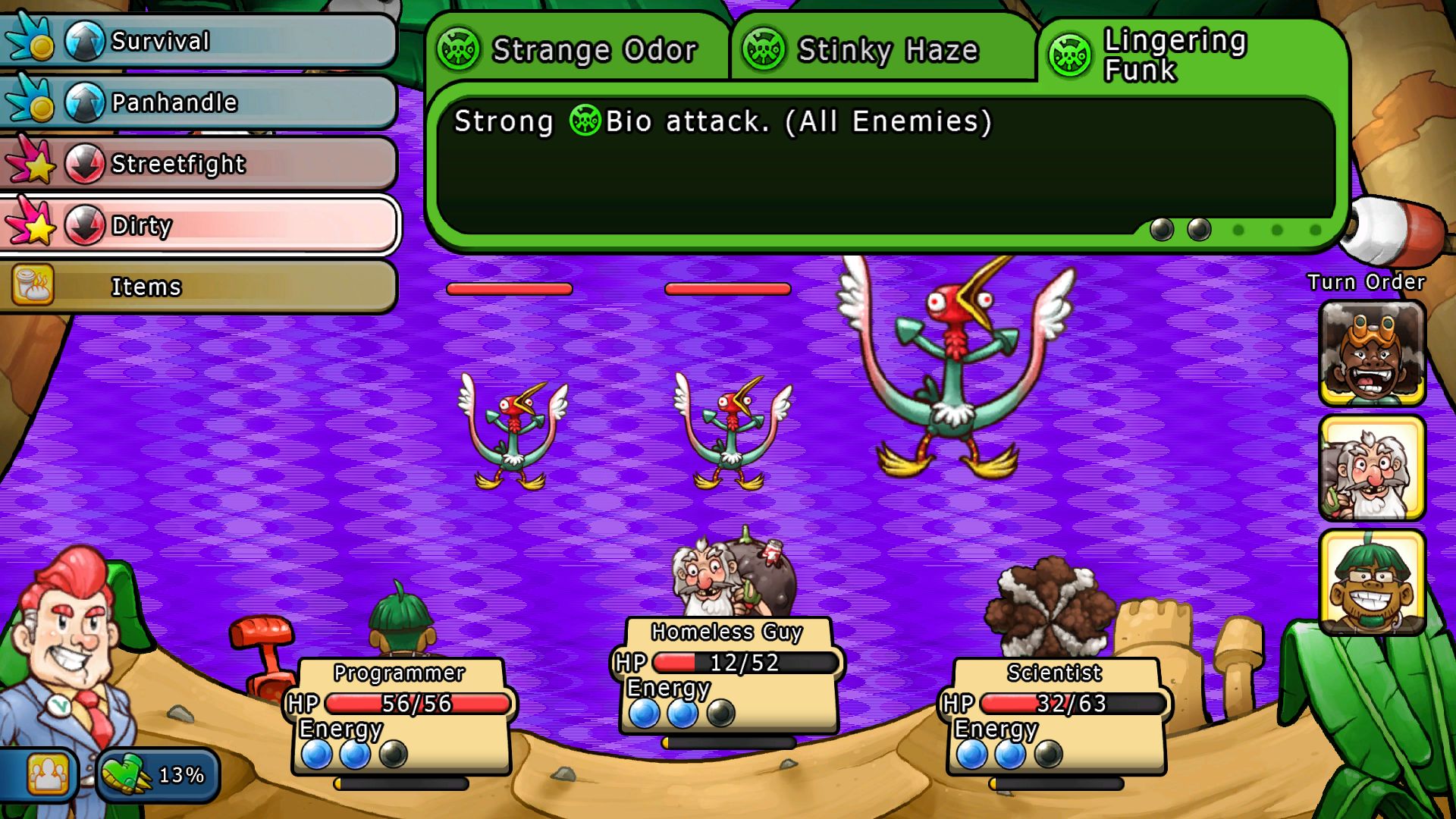 "I'm a fan of classic JRPGs myself, and I have a lot of nostalgia for them. But with that said, there is a reason we moved past design elements like these over the years- they're not good game design. They hinder progress, and are just there to artificially inflate length. They frustrate the player, and are so often enough to just make them want to give up."

Look, I know it all sounds charming- trust me, I do. I’m a fan of classic JRPGs myself, and I have a lot of nostalgia for them. But with that said, there is a reason we moved past design elements like these over the years- they’re not good game design. They hinder progress, and are just there to artificially inflate length. They frustrate the player, and are so often enough to just make them want to give up.

That’s not the only sin Citizens of Earth commits either- another unfortunate tendency it takes on from old JRPGs is its random encounter battles, which are far more numerous than they have any right to be. I am serious, literally every single step you take in the overworld will be interrupted by another random battle at some point, and while I know I said battles are breezy, constantly being interrupted by them breaks flow and gets extremely annoying.

It is often like taking all the worst parts of old JRPGs, and synthesizing them into one mix- which can be a pain, and is also very sad, because, as I said, Citizens of Earth is otherwise a genuinely good game, that I had a lot of fun playing through. The problem is, the fun came more from the charm and the wit, rather than the game design, which seemed to be actively holding back game design.

It goes a bit too overboard in paying homage to old school JRPGs- confusing world map, obtuse and annoyingly cryptic hints about where to go next, or what to do next, and a shockingly high rate of random encounters

Final Verdict:
GOOD
Citizens of Earth is a fun, if flawed, sojourn into the glory days of 16 bit JRPGs.
A copy of this game was provided by Developer/Publisher/Distributor/PR Agency for review purposes. Click here to know more about our Reviews Policy.