Civilization is like a cousin to me. It has been there as long as I can remember and, for every great memory I have of us spending hours together, there are just as many where we didn’t speak for lengthy periods. There was also that time I nearly failed my A levels during a particular Civ 4 addiction, something I won’t forgive Sid Meier for any time soon. Civilization 5 wasn’t the same though, shedding many of the series’ deeper mechanics in favour of simplifying the formula.

Regardless of your opinion on this, the Brave New World expansion restores much of the depth the series had lost in Civ 5, whilst simultaneously retaining a simplicity and elegance that can only come from the most masterful of gameplay designs. 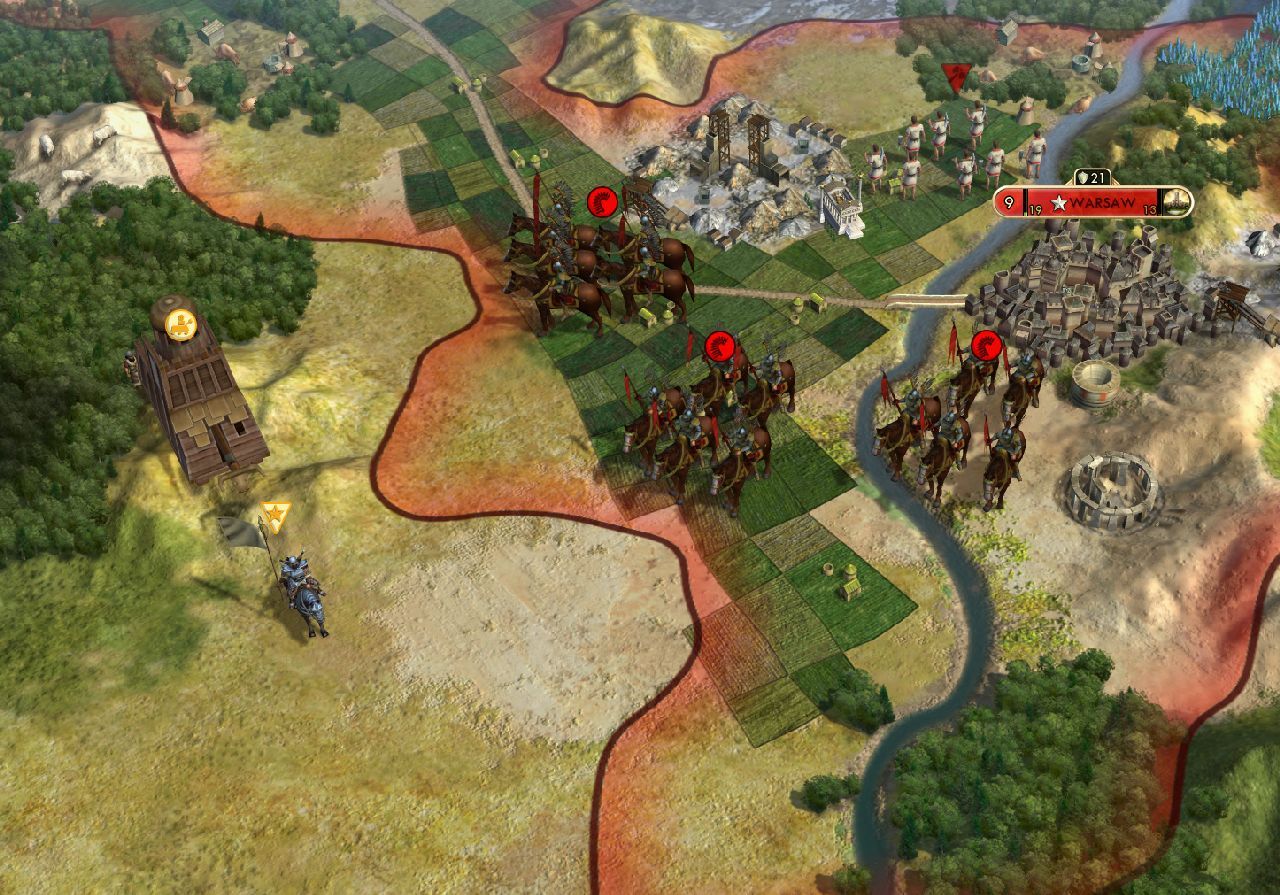 Lets get the mediocre stuff out of the way first. As all expansion packs love to throw numbers around, much of the media surrounding Brave New World discusses its new civilizations. There are nine in total, with two coming from the series’ past (albeit with alternate leaders) and the seven never before seen civilizations to control.

"The first big change comes in the way culture is handled. You still manage culture as before but, rather than merely unlocking all policies to gain a cultural victory, the culture win conditions now rely much more on responding to what your opponents are doing. "

They’re decent enough but, by the game’s very focus on creating a level field between all players, none of the new civs are particularly revolutionary. There are also eight new wonders, but these too do much the same thing as all other wonders in Civ 5. That’s not what Brave New World is about though, with the many effective gameplay tweaks eclipsing the standard additions.

The first big change comes in the way culture is handled. You still manage culture as before but, rather than merely unlocking all policies to gain a cultural victory, the culture win conditions now rely much more on responding to what your opponents are doing. It’s all wrapped around the great people and works mechanic, with famous art, literature and music generated in your civilization gaining you tourism. These tourism points accrue over time, acting as your offensive score in the culture battle.

As your tourism spreads to other nations, they use their culture scores to defend against your influence. If your tourism score is higher than a nations culture, they fall under your influence and, if you can do this to all the nations, you win. It becomes a more satisfying game of cat and mouse than the previous method, but it never becomes complex to the point of overwhelming the other game mechanics or victory conditions. 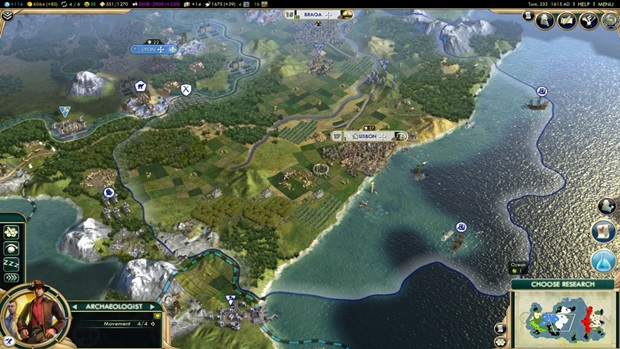 All this culture hasn’t stunted the growth of the more pragmatic elements of the game. Particularly when large armies get involved or politics start getting complicated, money talks. With this in mind, the introduction of trade routes allows for reliable incomes that change the pace of the game. Building caravans or trade ships allows your nation to establish a trade route with another city or city state within range.

"For those worried it may become a bit of a grind pursuing the culture or economy method, Firaxis have added some new gameplay elements to mix things up in the late game. "

This route supplies both parties with a differing boost to gold and science. Balancing out helping yourself and inadvertently helping your opponents adds a tactical depth to these trade units, and the extra gold you can acquire allows for some interesting diplomatic strategies. It also helps a losing Civ to play catch up, even when it comes to city development. Whilst you can use your gold to auto-build, you can set trade routes between your own cities to speed up their growth or production. Trade routes are simple, versatile and improve the economic side of the game to no end.

For those worried it may become a bit of a grind pursuing the culture or economy method, Firaxis have added some new gameplay elements to mix things up in the late game. Once a player has discovered all other civilizations in the game or builds the World Congress, they become the hosts for the World Congress, holding regular meetings to decide on global policies.

These are effectively global game rules changes that all players must suggest and vote on. Some may be used to help you, like voting for arts fairs that increase the production of culture, great artists and, as a result, tourism. Others are strictly to irritate and hinder others. You can vote for (or against) the right to prevent all trade with another civilization for instance, or raise the price of unit maintenance to harm those players who just spam large armies. 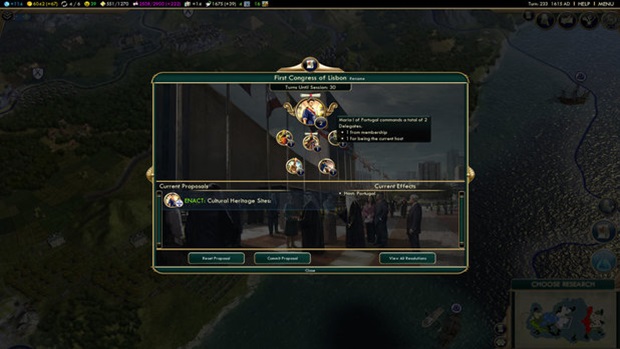 This makes for a decidedly tactical shift in the latter parts of each game, made all the more significant through how you earn delegates. You get more followers if you’re the leader of the World Congress but, if not, you need to grind for new delegates by keeping the neutral city states on good terms with your nation. You can, of course, do so through having spies infiltrate the city states to rig elections. In fact, all of the mechanics from the original expansion are back as well, making Brave New World an even more decisive upgrade if you didn’t get the previous expansion.

"It's a glorious thing, a deepening and enrichment of mechanics without the usual cost to simplicity."

With the cultural and political gameplay additions alongside tweaks to espionage, Brave New World completely revolutionises the vanilla Civ 5 experience. This does raise an issue though as, having made previous expansion almost entirely pointless for those who didn’t have it already, will the next expansion also include all the content found in Brave New World? Here’s hoping your £20 isn’t spent in vain. Though £20 may seem steep in our current climate of cheap DLC, Brave New World adds enough significant new content to justify its price immensely, even if a later expansion will render it obsolete.

Just like any family member, Civ and I had a falling out. In 2010 my fond relative changed its attitude in an attempt to fit in and, in doing so, lost a part of its personality I found so endearing. No fights last forever though and, now that Brave New World has come along, Civ has dropped the act, returning to my life as its old self. It’s a glorious thing, a deepening and enrichment of mechanics without the usual cost to simplicity.

Expansion packs used to be a big commitment for PC titles, often complicating mechanics to the point of obscurity unless you really knew the original game. Brave New World is not one of these expansions. Far from shutting out those drawn in by Civ 5’s accessibility, BNW’s added depth arguably makes for an even more refined Civilization experience. It is the definitive Civ release to date, and should be considered essential for all fans of the series.

Includes all updates from the previous expansion, Retains the accessibility of Civ 5, Restores lost mechanics from previous Civ games, New culture balances are satisfying, Fantastic additions to the diplomatic and economic systems

The definitive expansion pack for Sid Meier's, Brave New World turns the dark horse into the most mechanically refined Civ game yet

A copy of this game was provided by developer/publisher for review purposes. Click here to know more about our Reviews Policy.
Tagged With: Brave New World, Civilization 5, Expansion pack, Firaxis, Maxis, pc, Steam