All you need to know about Company of Heroes 2.

Check out this complete tactical guide for Company of Heroes 2. Learn how you can capture units, procure resources, learn advance tactics and the importance of cover.

Check out the entire guide below and let us know your thoughts in the comments section below.

How you can capture key points and procure resources

There are three types of resources in Company of Heroes 2:

If you want to have bigger armies, you need to have more man power. If you lose large number of forces your man power rates increase. If you need to increase munitions and fuel, you need to capture strategic points on the battlefield.  However you cannot capture these points if any enemy is nearby.

You also need to make sure that the captured territory must be connected to your base.

Your forces and your enemies can perform a large number of actions on the battlefield from throwing grenades to dropping barrages of artillery to places where enemies are concentrated.

Some of the abilities have certain pre-requisites such as ammunition costs to activate or will require a specific building be constructed. Most of the ability system from the original Company of Heroes remains the same, like grenades needs to be clicked on a enemy unit where you want it to explode.  There are also time dependent abilities so when the time runs out the ability will be deactivated. Toggles abilities are  controlled by the mouse, by activating or deactivating it.

Importance of Commanders and Commander points

You need to access the army customization screen from the main menu, then you need to select the army that you need to command.  You can select three army commanders. Commanders provide the following:

In your playthrough you must have unlocked bulletins which you can chose. Vehicle patterns can also be changed by using camouflage designs. As you rank up, more customization options will be unlocked. Remember, once you are in battlefield, you need to earn atleast one command point to access the command loadout.  Once you earn more points, more powerful options will get unlocked.

Taking cover is one of the most important elements of Company of Heroes 2. As you will learn from the tutorial below, cover is indicated by two colors. Yellow means half cover and green means full cover.

Craters can help your troops survive from any direction. Different types of cover will offer different durability. This is indicated by the colors that I mentioned above.  You will also earn defense and cover bonus while attacking the enemy whilst remaining in cover.

Use Range and combined arms intelligently

Long ranged weapons is the way to go if you want to take out enemies located at a distance (Like rifles and sub-machine guns). Using these weapons, it will increase their rate of fire and accuracy.

Combined arms is what the name indicates, you need to combine the best ammunitions which will work in both offensive and defensive scenarios. These include anti-tank or anti-craft weapons. Mixing the right combination is the key here.

As your make you way to Moscow, you need to take care of your soldiers against the freezing temperatures. This is indicated by a blue thermometer which indicates freezing and a red one which means warming. The best way is to make garrison buildings or moving your troops to half trek personal carriers or simply build fires.  Some abilities will be unavailable in blizzards. You also need to take care of ice grounds beneath you. They can be destroyed by enemy mortars. Deep snow will make your troops and vehicle movement slow.

Building and construction is the key here:

Building structures for defense purposes is one the key elements if you wish to survive in Company of Heroes 2. Pioneers and engineers can repair buildings and damages vehicles. You can access the ‘Building’ ability from the menu. There are basically two types:

In Company of Heroes 2, your units cannot see the entire map at once nor they can see what is happening behind them. Players will not be able to see behind objects that are taller than your unit. You can use this to your advantage when approaching an enemy base.

You can set Rally Point by selecting  the rally point option from the building the unit is deployed to. Each building can have a unique rally location. Your units can arrive quickly as well as close to the set rally point.

When you are being suppressed and when you should retreat

Your enemies can use heavy machines guns to pin you down and prevent you from advancing. When you are being surpressed your squad will go in a prone position indicated by a yellow warning sign. Under this state they will be protected for a limited period of time. You should also keep in mind that if a particular squad is being suppressed and if you decide to bring in another unit, there is a very high chance that they will be suppressed too.

If your unit is suppressed for too long, they will eventually be pinned down. These ‘Pinned’ squads won’t be able to fire or capture anything. You can get out of this situation by:

a. Killing the enemy machine gun unit with the help of another squad that is not pinned.

b. By breaking the line of sight by using smoke bombs.

c. Or to retreat. The retreating squad will take the shortest path back to the headquarters.

The Importance of Team Weapons

Team weapons is the key to success if you want to take down heavy enemy armor. Heavy Machine guns, mortars, anti tank guns fall under this category.

At any point of time, if you think you are being overpowered by your enemy you can always retreat along with your Team Weapons. But remember certain weapons like anti tank are so large that they cannot be re-positioned/retreat. 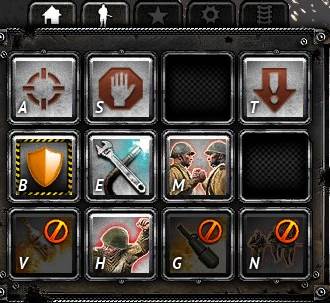 You can also use abilities which is depicted in the image above.  Abilities will vary according to the unit the player has selected:

Some of them are:

Note: This guide will updated once we have more information about the game. You can also check out the complete video walk-through of Company of Heroes 2 here.