Could Fan Favorite Series Dark Souls Make It As An Isometric 2D Game? 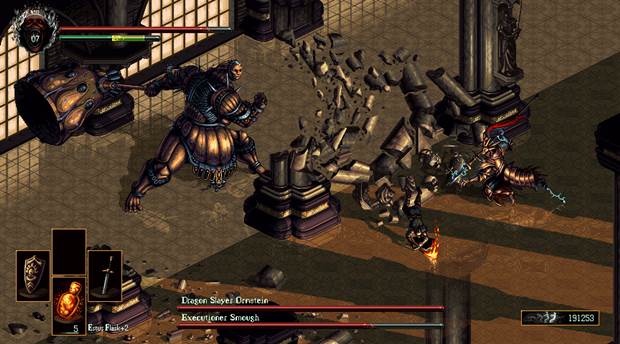 In this Dayshot feature at Kotaku, digital artists Cyangmou show off their portrayal of the iconic boss fight against Ornstein and Smough in 2D isometric fashion.

Dark Soul fans ate up the 2D re-imagining, firing off comments stating their opinions on what an actual 2D Dark Souls would be like:

“I bet it would be easier to beat like this!”

“Or maybe the opposite!
Maybe the final boss would actually be difficult!”

Speculation on whether or not the game would be easier or not soon devolved into strategical and tactical debates about the best tactical strategies for certain boss fights:

“Gwyn can be hard until you learn how to deal with him, or if he gets a lucky hit in. It depends on your build a lot, but he really loves just bashing you down with long combos.”

“Well I’ve only beaten the game once and I found Gywn to be the easiest boss in the whole game.
Actually the only boss I really had a problem with was the DLC last boss and that’s just because I more or less rushed through it.
But as for Gwyn I literally just traded blows with him and he died first lol.
I think the fact that I had literally zero magic throughout the entire game and had put all my points into none magic related things probably turned my character into a walking tank or something though… (I was going for a faster rouge like build but by the end of the game I could wear most heavy armor with little to no speed reduction and getting knocked down barely ever happened anymore)”

Dark Souls fan or not, one has to appreciate any fan made artwork that can elicit a response this passionate from the fans of the source material.