Crash Bandicoot 4: It’s About Time Wiki – Everything You Need To Know About The Game

Everything you need to know about Crash Bandicoot 4: It's About Time

Crash Bandicoot 4: It’s About Time is a platformer developed by Toys for Bob and published by Activision. A follow up to 2017’s collection of remakes for the original Crash trilogy, Crash Bandicoot N.Sane Trilogy, it is the fourth chronological game in the series, the eighth mainline instalment, and the first new mainline game in the franchise since 2008’s Crash: Mind Over Mutant.

Unconfirmed reports emerged in early 2020 that a new mainline Crash Bandicoot game was in development and would be revealed in the coming months. In early June, leaks of new merchandise for the franchise fueled further speculation. Just days afterward, several members of the press were sent a jigsaw puzzle by Activision, which showed the image of a mysterious mask, leading many to believe that a new Crash Bandicoot game would be revealed soon.

Promptly afterward, a listing for Crash Bandicoot 4: It’s About Time was published by the Taiwan Digital Game Rating Committee, prematurely leaking not only the game, but also its box art, and a short synopsis. Another leak a couple of days later stated that the game would launch in October. Around the same time, developers Toys for Bob started teasing an announcement that would be made imminently.

The game was officially unveiled during the Summer Games Fest 2020 on June 22, where its name, developers, and October 2 release date were confirmed. The game is developed by Toys for Bob using Unreal Engine 4, who previously worked on the collection of remakes of the original trilogy of Spyro games on the PlayStation, called, Spyro Reignited Trilogy. They also did support work on Crash Bandicoot N.Sane Trilogy, which was primarily developed by Vicarious Visions. The developers noted that the game’s subtitle, It’s About Time, was a play on words, not only because it was the first new Crash Bandicoot game in many years, but also because time manipulation would be central to the story and gameplay.

Crash Bandicoot 4: It’s About Time was confirmed to be coming only to PS4 and Xbox One at launch. When asked about the possibility of ports for PC and Nintendo Switch or the upcoming next-gen consoles PlayStation 5 and Xbox Series X, Activision said that they were evaluating additional platforms they could bring the game to. In August 2020, mentions of Nintendo Switch were found in the source code of the game’s official website.

Activision have also confirmed that the game does not include microtransactions at launch. 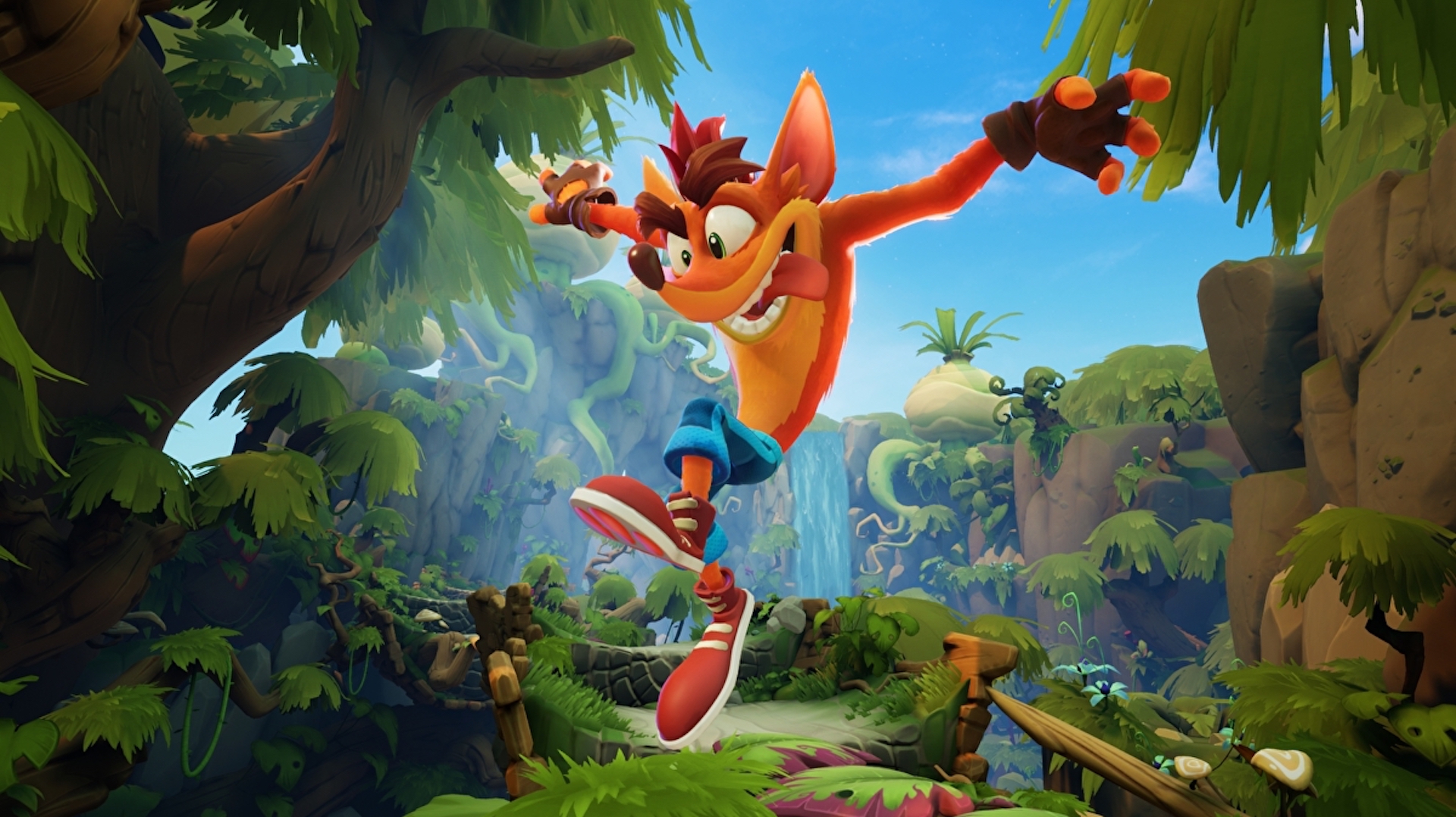 Crash Bandicoot 4: It’s About Time takes place after the events of the third game in the series, Crash Bandicoot: Warped, retconning the events of the four games that followed it in the series’ chronology. Neo Cortex, Uka Uka, and N. Tropy are able to break out of their space-time prison after several attempts, creating a rip in the fabric of time as a result. In doing so, they expose a multiverse. In order to restore order to the multiverse and put a stop to the impending doom brought about by their actions, Crash and Coco must travel through the multiverse and find, unite, and work with four Quantum Masks.

Crash Bandicoot 4: It’s About Time features a gameplay style similar to Crash Bandicoot N.Sane Trilogy, with a focus on isolated, linear levels that place an emphasis on platforming challenges instead of the more open-ended collection and exploration-focused style of later games in the series. Franchise staples also make a return, such as collecting Wumpa fruit, smashing crates, checkpoint boxes, Nitro crates, and more.

Levels have distinct settings and themes, ranging from pre-historic jungles and urban and futuristic cities to frozen caves and landscapes, pirate ships, volcanoes with rivers of lava, and more. There are also sections in which Crash runs toward the screen while trying to escape from incoming enemies and hazards, similar to previous games. There are over 100 levels in the game, which is more than the levels in all of N.Sane Trilogy put together.

The game features several playable characters. The two primary playable characters are Crash and Coco, who both have the same movesets, including jumping, swinging with ropes, sliding, zip lining, wall running, and rail grinding. Players can switch between them at any time during levels, and the entire game can be played as one or the other.

Neo Cortex is also featured as a playable character, and he has unique abilities and movement options, with a greater focus on strategizing rather than skill-based platforming, entailing the usage of gadgets to overcome obstacles and challenges. Neo Cortex can use a ray gun to transform enemies and obstacles in the environment into platforms, which he can then jump on and use to his advantage. Unlike Crash and Coco, he cannot double jump, but has a sideways dash ability. Dingodile is also featured as a playable character for the first time in a Crash game. Following the events of Warped, Dingodile retired and came into ownership of a diner, but the chaos caused in the multiverse brings him brack into the fold. In some levels, characters such as Neo Cortex or Dingodile are the only ones who are playable. Each character can be visually customized with various skins that are earned through in-game challenges. The game will also feature several boss fights against a mixture of returning and new characters, with N.Gin confirmed to be returning as a boss. Boss fights are designed to be more challenging, and some have multiple phases.

Masks will also play a major role in gameplay and in story. Crash Bandicoot 4: It’s About Time sees Crash and Coco travelling the multiverse to gather four unique Quantum Masks. These are gained by fighting and defeating bosses, and each mask has a unique gameplay application. The Time Mask, Kupuna-Wa, can be used to  slow down time to a crawl in order to move past fast moving obstacles or enemies, or even avoid the explosions of Nitro crates. Ika-Ika, the Gravity Mask, allows Crash and Coco to flip the direction of gravity for themselves during levels. Lani-Loli, the Phase Mask, is used to phase objects, crates, and obstacles in and out of existence. The fourth mask is called Akano. Crash and Coco can switch between these four masks in order to tackle various challenges and platforming puzzles. Equipping each mask is accompanied with a change in outfits for the player character.

Crash Bandicoot 4: It’s About Time also features a mode called N.Verted Mode, which is a mirror mode of sorts. This sees all levels being completely transformed in various ways, from the aesthetics and art style completely changing to new objectives and mechanics. For instance, one level is transformed into black and white, and Crash or Coco bleed colour into the surroundings everytime they spin. Players have to use the coloured sections of the level to find the right path forward. Inverted Mode – which is developed by Beenox, who previously developed of Crash Team Racing Nitro-Fueled – is unlocked after beating the game.