A racer with solid mechanics tripped up by its own simplicity.

There are times when simplicity is the order of the day. Some of the most famous games have used simple mechanics to great effect. After all, not many stats need tracking in a game of pong, yet it is one of the most recognisable and iconic titles of all time. Still, there are times when you can be too simple. Crash City Mayhem goes for the simple multi-route racing jugular in a cheap and cheerful 3DS game. Though the price is right, simple mechanics and a simple story fail to keep your interest for long. 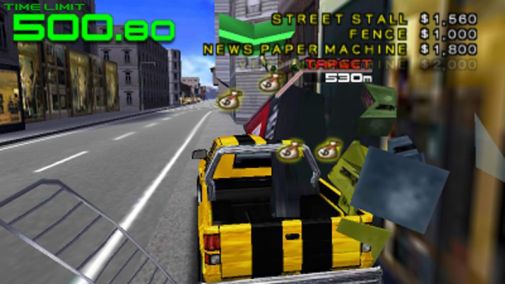 You play a nameless courier, tasked with taking on delivery and acquisition jobs for a series of less-than-legal clients. It never gets more complex than this, but the bizarre nature of your contracts and the forced and wooden dialogue actually serve to give the game a sense of absurdism. It would be like what would happen if Samuel Beckett got bored and signed on with an indie developer. I might be reading too much into it of course, but the broken scripting certainly seemed more an ambitious narrative technique than simply bad writing.

Whether you agree with my reading of the narrative or not, its primary function is to set up the game’s driving action. The gameplay is arcade racing at its simplest, a case of matching speed to the severity of each corner and throwing in handbrake turns as your confidence grows. The way each vehicle handles is satisfying, though there isn’t a huge amount of variety in what vehicles you can choose. You also unlock new car attachments as you progress, though these customisation options are purely cosmetic. Tuning is also available, though the effect this actually has on gameplay is rarely felt. 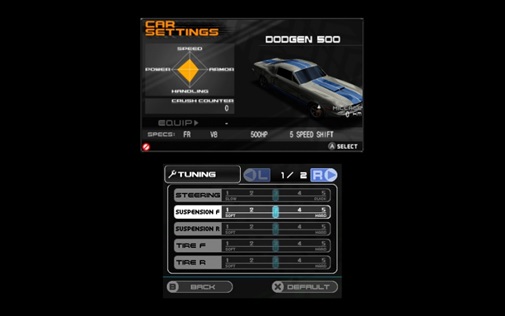 Each level is a joy to cruise through, with a myriad of short-cuts and alternate routes rewarding multiple playthroughs. The problem comes in how Crash City Mayhem is almost painfully aware of each stage’s replayability. As a result, progression is often locked until you complete the same level multiple times on different difficulty settings. This would be acceptable if Hard mode changed the formula, but the additional challenges just force you to complete your objective in a shorter time. The fact that the objectives are so bland also doesn’t help. The six levels seldom ask you to do anything more interesting than get from A to B, and repeating each level through a few times becomes tiresome. One tailing mission attempts to break the mould, but the AI detection mechanics are so broken that any sense of subtlety is removed. If the gameplay was more complex this kind of monotony could have been acceptable, but it doesn’t take long for you to tire of Crash City Mayhem’s basic mechanics.

It also doesn’t help that there are only a handful of levels. Even when the forced repetition extends the game, lifespan definitely isn’t one of Crash City Mayhem’s strong points. At least your short run through looks good. Graphics are crisp and vibrant, giving an odd sense of life to each stage in spite of the lack of pedestrians and minimal traffic rendered on the roads. It’s a shame the visuals don’t remain quite so solid when using the 3DS’ eponymous stereoscopic features. Colours wash out and a poor depth of field renders the 3D effect a disappointment. This may not be a problem on the 3DSXL console, but we were only able to test the game on an original 3DS model where these issues were clearly present. 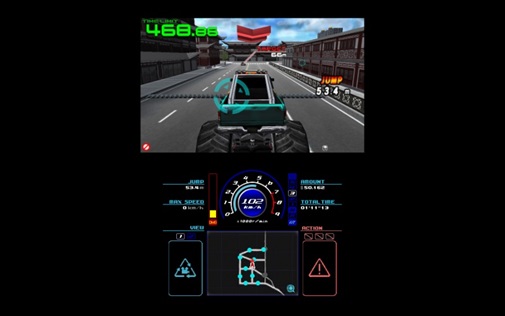 Though you might not notice whilst playing casually, there is a decisive lack of focus in Crash City Mayhem that must be called out in a true criticism. Though the game is set in a city, there is a distinctive lack of mayhem and crashing. You can destroy elements of the environment, thought it serves little purpose outside of tallying up a score. The weak sound effects and standard background music further takes the mayhem out of the game, rendering the title mostly irrelevant.

It’s hard to really dislike Crash City Mayhem as, despite a lack of focus and content, the game certainly puts the effort in. Sadly, aside from some off-kilter dialogue, CCM doesn’t offer any new or exciting gameplay mechanics to warrant a recommendation. Unless you have a real fetish for mediocre games, there is very little reason to download Crash City Mayhem.

An endearing racer with a simple premise, Crash City Mayhem sports interesting dialogue and level designs amongst the cardinal sins of minimal content and unfocused gameplay.

A copy of this game was provided by developer/publisher for review purposes. Click here to know more about our Reviews Policy.
Tagged With: 3DS, Crash City Mayhem