Posted By Rashid Sayed | On 25th, Mar. 2011 Under Reviews | Follow This Author @GamingBoltTweet

The original Crysis, other than being a great game is an amazing tool to judge how good your gaming PC is. It’s no secret that a lot of gamers still are not able to run Crysis at maximum settings which I think is one of the many reasons why Crytek is bringing the series to home consoles as well. There has been a lot of speculation as to how Crysis 2 will live up considering the fact that its predecessor was such a huge critical hit. Well, after playing the PlayStation 3 version a couple of times one thing is pretty clear. It is one of the best looking games this generation if not the best looking ever.

Crysis 2 begins a bit abruptly. After finishing the original Crysis a couple of weeks back I thought the story will pick up straight after the events of the first game, but that is not the case. In fact the events in Crysis 2 take place a bit more ahead in time, 3 years to be precise,  where a couple of soldiers are attacked by an alien ship, almost killing the main protagonist of the game, Alcatraz. After a short cutscene you find yourself alive with your Nanosuit 2 equipped.  Much of the game revolves around extracting a certain Doctor Nathan Gould who is supposed to have information on combating the Cephaloids, the aliens who were behind the incident that took place during the original Crysis. According to Gould, Alcatraz or rather the Nanosuit 2 is the last hope that humanity has to put an end to this alien invasion but shortly after he gets rescued, the duo get attacked by C.E.L.L., a private military company of Crynet. The C.E.L.L. apparently wants Alcatraz dead, so the player basically has two enemies in the game, the aliens and the C.E.L.L. The story seems exciting and it is told pretty neatly as well but unfortunately it lacks the depth of the original. Crysis had a feeling of suspense but the sequel somehow does not manage to recreate that story telling aspect. 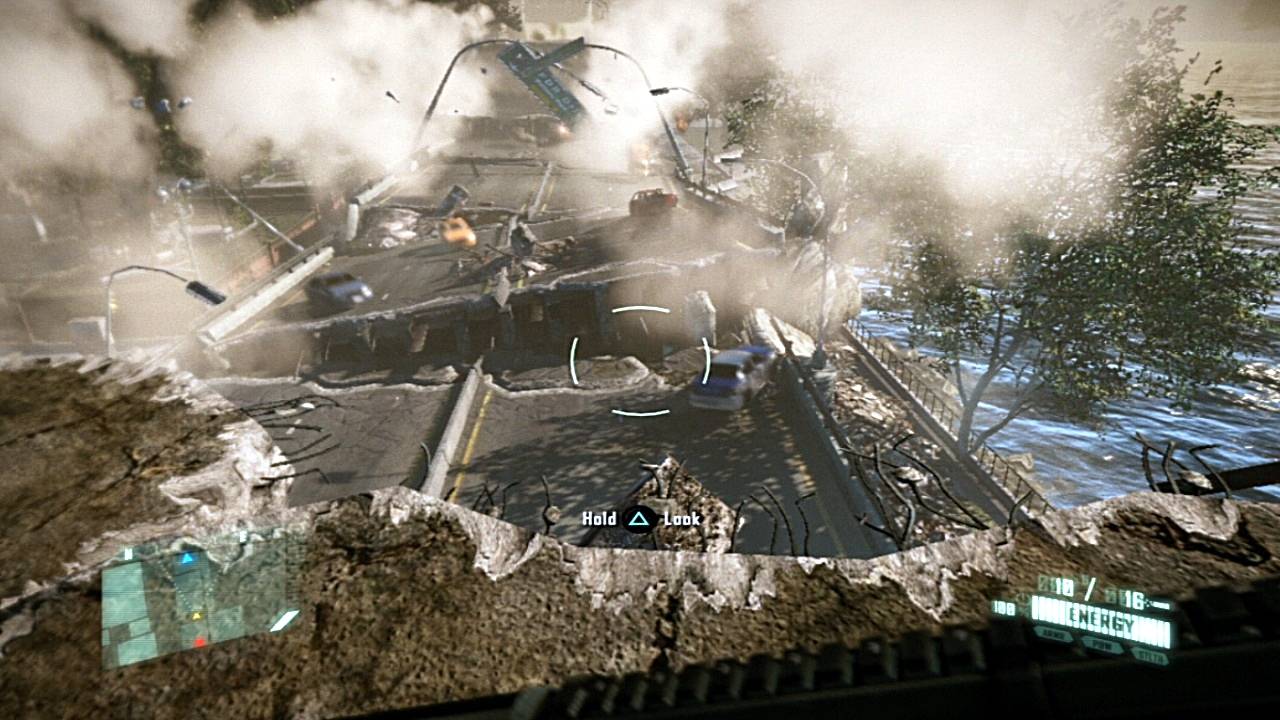 Yep, things are not alright here.

Much of the gameplay in Crysis 2 obviously revolves around the Nanosuit 2. There has been a lot of hype behind the new technology and how it will revolutionize the first person genre and to an extent it is indeed successful.  Some of the elements like maximum armor and cloak from the first game return in the sequel.  For starters who are not aware of these terms let me take the pleasure of explaining them.  Whenever the user initiates cloak your character will becomes invisible for a period of time indicated by an energy meter on your hud. Now there are couple of things you have to make sure before you start using cloak. First thing, the energy meter will start depleting more rapidly if you are moving around but the affect will last much longer if you are stationary. Secondly if you are on the offensive and start shooting, the cloak will get disengaged.  When you are in armor mode you are much more resistant to incoming attacks, especially if a grenade or any other explosive material goes off close to you.  But again, just like any other Nanosuit feature, the armor mode will also drain your energy meter. You can also run pretty quickly which drains your energy meter though the speed is not as fast it was in the original.  The game also introduces Tactical  Option which gives you a great view to analyze and plan your battle strategies. Tactical Option also gives the player insights about weapon supply and shortcuts in the surrounding area. Many times during my gameplay when I made proper use of the Tactical Options I was able to avoid unnecessary battles, so if you are not a run and shoot kind of player, this new feature will be a great addition.

New to the franchise is the ability to upgrade your Nanosuit with the help of Nano Catalyst which can be found after you have killed any alien. Crytek have done a pretty smart thing by distinguishing the kind of upgrades you can do in the single player and multiplayer modes.  Basically your Nanosuit can be upgraded in to four different modules namely: Armor, Stealth, Power and Strategic. Now each of these modules get further divided in to a number of sub – modules like maximum radar which can be used to highlight enemies on the radar, threat tracer which can be used to highlight the trace of an incoming bullet or the Covert ops which are useful for suppressing the sound of the footsteps. There are tons of other options available which the player can buy, but they are pretty costly in my opinion and some of them you won’t be using at all during the pretty long single player campaign. 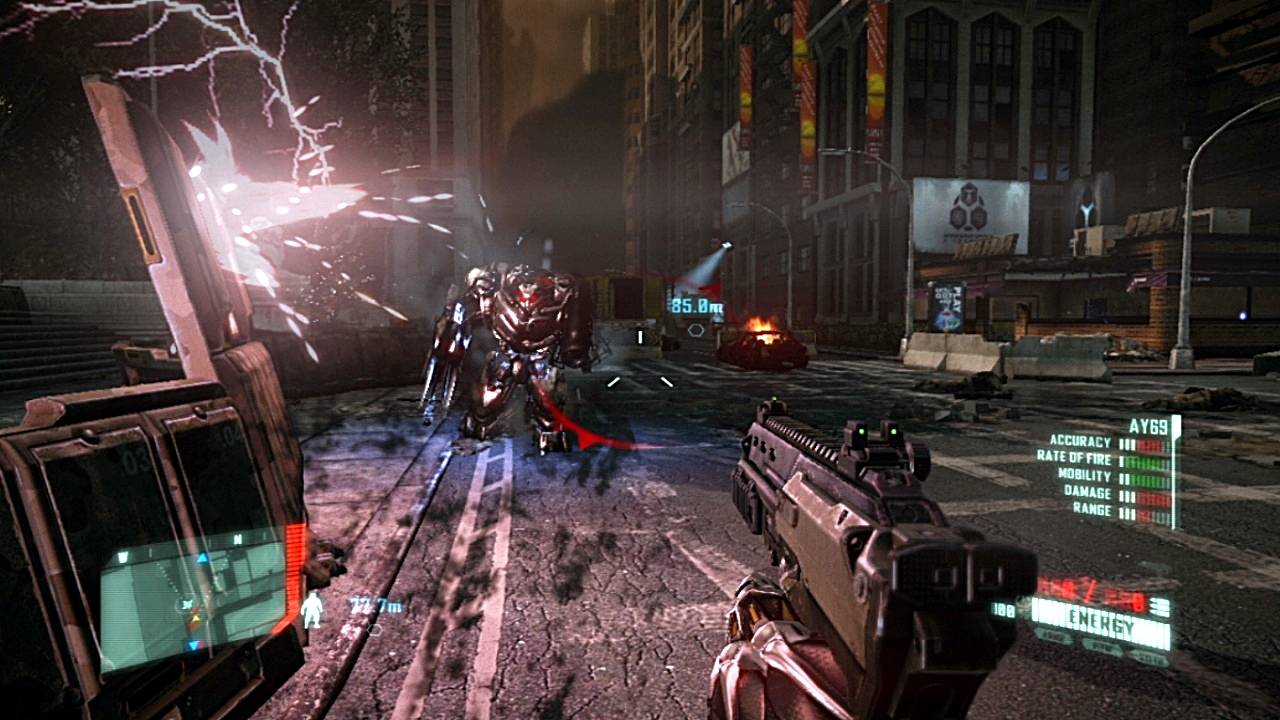 Devastators were pretty tough to take down.

The original Crysis was applauded for the inclusion of some really challenging enemies with life like artificial intelligence. This time around Cryetk have taken it a step ahead by including a smart roster of enemies. For the first few hours of the game you will be facing off against the C.E.L.L. operatives which can be compared to the Koreans that you faced in the first game.  The C.E.L.L. soldiers are also strikingly similar to ones that you faced in F.E.A.R. (if you ever played the game) however they lack the speed and the strength of their Alien counterparts.  The Ceph as they are called in the game, are better trained in shooting and are pretty tough to take them out. The Ceph Assault Units, nicknamed as Grunts will probably take more cover and move very fast from one place to another. Then we have the Devastator units who carry an energy based rocket launcher and won’t go down ever after drilling multiple ammo magazines in to them. The Stalkers are the most irritating foes you will face in the game. They are one of the smallest species of Ceph you will come across but what makes them challenging is their speed and the ability to cling and jump around places. Last not the least, the Pinger is a 3 legged robot type Ceph which you are going to face atleast a couple of times during the campaign mode. These guys use an EMP device to take their foes with devastating effect. The enemy list looks damn impressive but many players (including me) would be disappointed by the lack of engaging boss fights. There are a couple of good show downs with the Pinger but that is all to it. The game lacks a good final boss fight, which was such a treat in Crysis and Crysis Warhead (Red Hunter and Ceph Warrior).

When you have a formidable opponent, you should also have a formidable armoury.  There are a good number of guns and ammunition to be found in the game. Most often or not, you will be carrying the extremely reliable SCARAB rifles, which is a great option for taking down C.E.L.L. soldiers.  You will also be facing against C.E.L.L. helicopters, so in this scenario a JAW will come in handy for firing heat seeking missiles.  You can also use the DSG-1 sniper rifles, Marshall and Jackal shotguns against the C.E.L.L. Operatives for close range combat.  Interestingly some of the weapons that I listed here won’t be at all effective against the Ceph. For this purpose Crytek have provided us a couple of weapons including the energy gun which will fire plasma bullets, literally melting the Ceph.  You can also use the Swarmer which fires a batch of missiles which is useful in the boss fights against the Pinger.  Just like in the original Crysis, the player can carry grenades and C4 for an effective way of taking out some of the enemies. 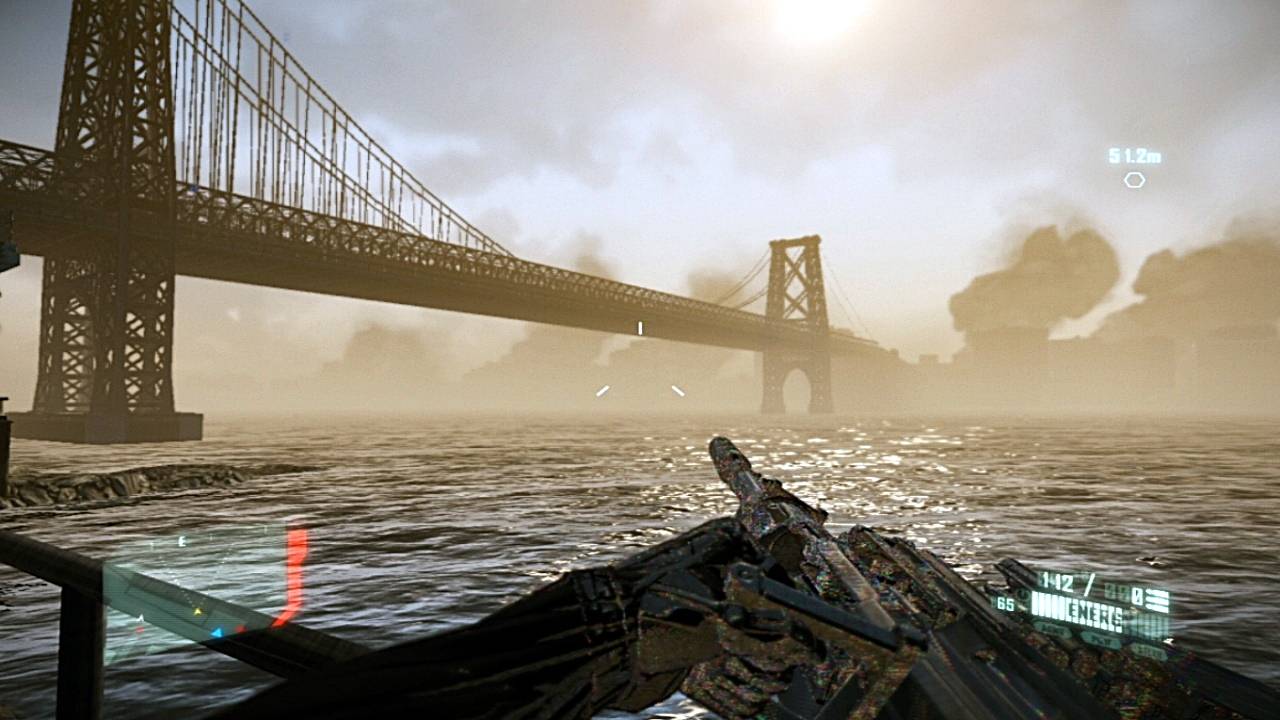 Level design is one of the biggest pros in the game. Crytek have developed a fairly open ended world, though in my opinion Crysis was a bit bigger.  As I mentioned before, most of the levels gives you enough options to avoid fights and reach your destination without raising any alarms. Though the basic gameplay still remains from reaching Point A to Point B, the developers have ensured that player is not forced to take a particular path. You will be coming across destroyed railway halls, a city that depicts chaos and an alien nest that looks like a scene from a Hollywood block buster movie.

After seeing so many tech demos for CryEngine 3 it was no secret that Crysis 2 will be visual fan fair. Some of the details are truly jaw dropping and it’s easy to let a few enemy bullets hit you, while you stand and admire the beauty of the game. Real time destruction, devastating earthquakes and building coming crashing down will be something that you have to get yourself acquainted while playing Crysis 2.  Your character, Alcatraz, unlike Nomad from Crysis does not speak at all but thankfully the people around him have done their job decently, especially Crynet Director Hargreave and Gould who were pretty powerful characters in the game. The background score is different for each of the levels and does a great job of representing the intensity of the action, not to mention the main theme is absolutely amazing.

The multiplayer experience is pretty vast in Crysis 2. There are numerous gameplay modes that one can choose from and eventhough they have been done before in previous first person shooter games, the ability of the players to use the Nanosuit makes them unique.  First off you have the Instant Action and Team Instant Action where you have to take down as many players as you can. Next up is the Crash site where players have to gather alien pods before the enemy gets to it first.  Assault mode was one of my favourites since there is no option to respawn and multiple soldiers will be itching to take you down. Capture the Relay is nothing but your Capture the Flag mode where the player has to gather the enemy’s relay and return back to your base. To finish it off, Extraction gives the chance to the player to collect Nanosuit bio ticks from enemy locations.  All these modes help you earn experience points which can then be used to unlock new weapons and nanosuit upgrades. Overall the multiplayer is pretty simple and straightforward and at the same time enjoyable due to inclusion of Nanosuit abilities.

Crysis 2 is a pretty long game and playing at normal difficulty will take about twelve to fifteen hours provided you are interested in collecting all the dog tags and flashbacks that the game throws at you.  But the game lacks the Crysis feel due to a broken story and a boring protagonist. But if you look at the overall package, a solid multiplayer, the amazing Nanosuit and the best visuals that the world has seen, Crysis 2 is game that is worth the hype.

Story is a disappointment, Lack of boss fights and does not have the Crysis feel that the original had.

Crysis 2 for the PlayStation 3 is an exceptional shooter and perhaps the best looking game on the system.

A copy of this game was provided by developer/publisher for review purposes. Click here to know more about our Reviews Policy.
Tagged With: Crysis 2, Crytek, EA, pc, ps3, xbox 360