Back in 1981, Japanese games publisher Taito brought us an innovative new puzzler called Qix, which was subsequently ported to just about every games console known to man. Now, 30 years on, UK developer Laughing Jackal has revisited the classic game and put a whole new twist on proceedings. Cubixx HD is a follow up to the studio’s PSP Mini game Cubixx, released towards the end of 2009. And it’s a worthy update too, giving it a nice high definition sheen and adding loads more levels and game modes to the mix. 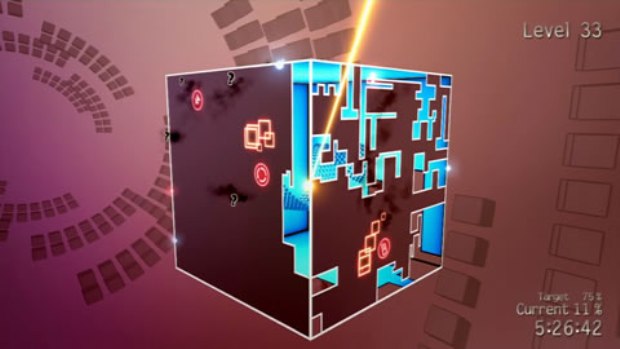 Just like Qix and its many variations over the years, the aim is deceptively simple – to move your “Cubot” cursor and cut away at the playing area with a laser until you capture the required percentage to take you to the next level. But it’s not that easy… there are plenty of enemies patrolling the arena that are determined to stop you in your tracks. Unlike Qix and its predecessors, however, this time you’re not restricted to a single, square playing area but can move about all six faces of a giant cube that pivots as you move. The effect is not only aesthetically pleasing but adds an entirely new element to the game and the way you play. It’s effectively, six times the challenge! Coupled with some thumping tunes and insanely addictive qualities, it’s a great way to while away the hours.

There are 50 levels on offer, with the first few easing you in to the gameplay mechanic before introducing all manner of hazards, enemies and collectibles. Later in the game, the pressure mounts as you only reach a restart point every five levels.

The bad guys get increasingly tricky as you progress too. Initially, you simply have to avoid some that patrol each play area, bouncing of the walls as they attempt to touch your laser trail and lose you a life. Later levels see the introduction of Line Chasers, which closely follow your path meaning you can’t stay still for too long. Other enemies of note include Homers – black clouds that migrate towards you, slow you down and make you easier to catch, Black Holes that affect your speed and movement, and Asteroids that can destroy you with their blast. 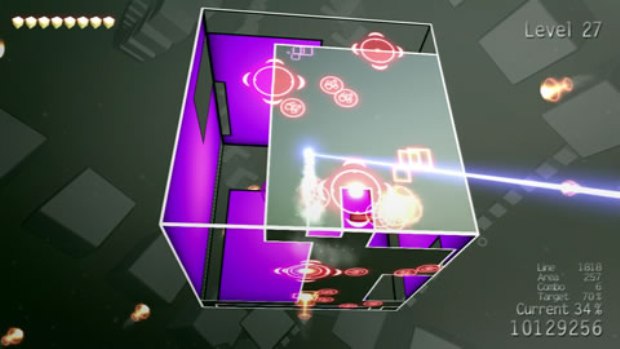 The screen quickly fills up with enemies and power ups

Every so often numerous icons float about the arena – some provide extra lives, speed boosts or a huge point cache. Others are a little less helpful, reversing your controls, slowing you down or instantly killing you.

Besides making your way through the raft of levels to the bitter end, leaderboards help prolong your enjoyment. Score multipliers and the aforementioned power ups help you accrue some spectacular totals, which you’ll inevitably strive to surpass. Should you manage to traverse al six cube faces in a single line, you’ll increase your score combo and the points will flow freely.

Fancy upping the ante a little? The new Challenges mode includes another 50 bespoke trials that will see you chasing high scores or raising against the clock. The Score Attack, Line Attack and Time Attack offer plenty of hair pulling moments and are a nice distraction from the core arcade game. In Time Attack mode you need to complete a level as fast as possible to make it onto the high score table. You don’t have to worry about dying as you’ve got unlimited lives, although each death adds a 10 second penalty to your score. Score Attack requires you to score as high as you can with a solitary life, whereas with Line Attack you must get as many points as possible from a single line.

A really neat touch is the ability to grab up to seven friends for the multiplayer mode, which crams several cubes onto the screen at once and sees you compete. Deathmatch sees each player having to cut the cube every 15 seconds or face the penalty. It’s a welcome addition and particularly nice when a developer includes a local co-op element. 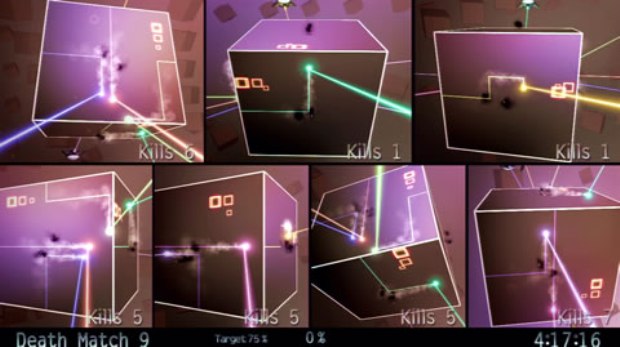 Multiplayer is a welcome addition

It certainly is an addictive game, that’s blessed with that vital “just one more go” ingredient. The difficulty is pitch perfect; it’s not too tough at first but let your concentration lapse, or get a little too confident and those extra lives you’ve collected will quickly disappear. For the amount of time you can spend playing Cubixx HD, the paltry asking price makes buying this a no brainer. It combines current gen looks and accessibility with retro goodness. A must have!

Loads of levels, plenty of enemies and some great visuals and sounds. The six cube faces make it even more of a challenge. Oozes "just one more go" appeal.

Can be a little samey and does get incredibly tough. Perhaps a little expensive considering that Mini game Cubixx is much the same game.

Final Verdict:
SUPERB
A classic retro title given a modern day revamp... and it works really well. Maintaining all of the addictive qualities of its predecessors, Cubixx HD is a great game solo or with friends.
A copy of this game was provided by Developer/Publisher/Distributor/PR Agency for review purposes. Click here to know more about our Reviews Policy.