There’s very good reason why consoles don’t tend to have a wealth of flight sims in their library of games. Unlike their PC counterparts, the controls typically suck. Keys and joysticks tend to be so much more effective than the few buttons available on your conventional 360 or PS3 controller. So it’s good news then that Mad Catz has not only released an “authentic World War II flight sim” but has bundled it with its new Pacific AV8R FlightStick. 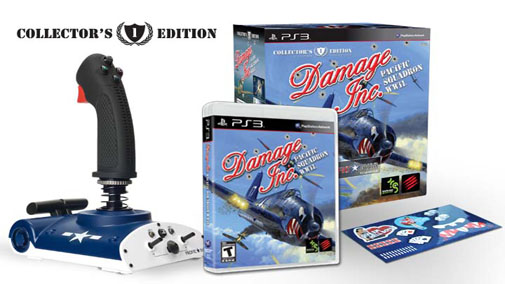 The Collector’s Edition comes with a rather decent joystick

Damage Inc. Pacific Squadron WWII certainly wins the award for longest title but it probably won’t be the recipient of many other accolades. As a standalone game, the World War II flight sim is not necessarily a must buy title but for fans of all things plane related, it’s still reasonably enjoyable. There are 12+ hours of campaign, multiplayer options, huge maps, and 20 single-player and co-op missions so there’s plenty to keep you occupied. But it’s not without its flaws.

Missions are lengthy and generally involve protecting allied forces and buildings, fending off attackers or spotting targets. Thing is, you quickly realize this tends to be a case of fly to point A, now fly to point B, rinse and repeat.

Set in the early 1940s and spanning several years, you get to fly various aircraft around major battles and events during WWII from Pearl Harbor and Iwo Jima to Midway, Wake Island and Taroa. 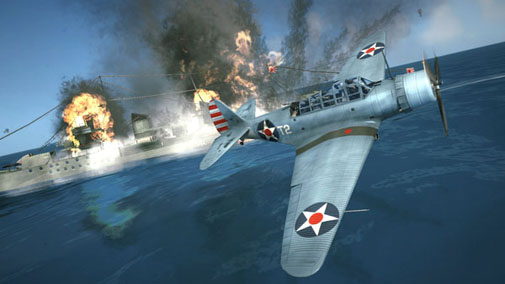 From a distance, it looks decent – but close up the graphics are ropey

From waaaaay up in the skies, the graphics look decent enough and really give the impression of space and scale. The rolling hills, vast sun soaked ocean and built-up bases and ports certainly look the part. Get too close to the ground however, and the poor textures and its slightly last gen look disappoint.

It’s quite awesome when there are loads of planes fighting it out all at the same time, bullets flying this way and that, allies and enemies whizzing past. Amongst all the explosions, flames and debris you get a real buzz weaving between vessels, divebombing targets and engaging in grueling dogfights. And the 30 accurately rendered fighter planes look pretty decent themselves. In fact, the promotional blurb says that there are 68 variations of 32 unique aircraft – some unlocked as you progress. They all seem to have different characteristics, which has noticeable benefits depending on the mission type. Upgrade points earned allow you to tweak your plane’s guns, armour, agility and speed. 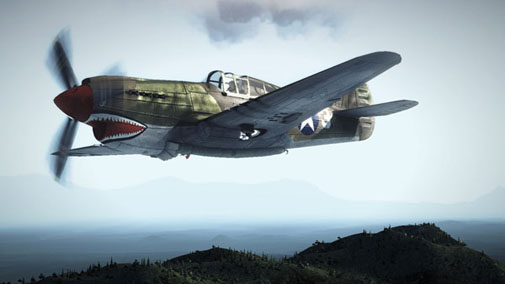 There are plenty of different types of planes to fly

The satisfying ratatatat of gun fire and buzz of engines as you patrol the skies also adds to the atmosphere, although the mission briefings and trite dialogue tends to grate a little. Although I do like being called “Reaper Leader” all the time, it does get a little tired after a while.

You can choose between the Arcade or Sim mode – the former offering simpler controls, while the latter is for the more competent pilots. Certainly the in-game bullet time (Reflex mode) makes the action feel a little more arcadey, slowing down the action temporarily so you can take your shots. Should you want to move a little faster, there’s also a speed boost (Warspeed).

Besides the single player story, there are various multiplayer options too with between 2-8 players fighting it out online and co-op modes. The Dogfight deathmatchs allow you to go head to head against up to seven other players. Team Dogfight, as you’d expect, is the same but with some wingmen along for the ride. Survivor, meanwhile, is a game of last man standing – and again, there’s a team-based option if you fancy. Alternatively, two teams can race to sink one another’s aircraft carriers.

Ultimately though, it’s the controls which make or break flight games and thankfully, Mad Catz has this one nailed. The game is perfectly competent with your standard pad, which provides everything you need to roll, pitch, yaw and all that other stuff that’s very important when in the skies. 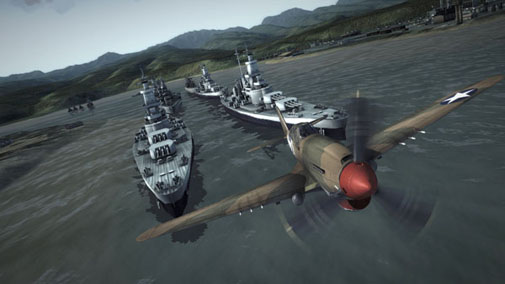 The game plays much better when using the joystick

But although the controls are responsive and do what they’re supposed to do, it isn’t until you plug in the Pacific AV8R FlightStick that comes bundled with the Collector’s Edition that you really get to properly experience the game. With a pad, the game is decent enough but add a proper joystick and it ramps up a couple of notches.

It’s solid looking and rests nicely on the thigh or tabletop thanks to four legs that can be attached to the base. The 1940s styling and bundled stickers also look stylish. There are various knobs, buttons and switches dotted about, including a throttle at the front.

Despite the extremely loose feel to it, the AV8R FlightStick is remarkably comfortable to use and appears extremely precise. If you’re in the midst of a dogfight, the odds certainly feel more in your favour with your hand wrapped around a physical joystick

What’s more, the AV8R not only works with Damage Inc but thanks to a nifty compatibility toggle also works with numerous other flight sims such as Birds of Prey, Birds of Steel, Blazing Angels and Tom Clancy’s Hawx.

As a standalone game, Damage Inc won’t top your wishlist. Disappointing graphics and laborious missions are offset somewhat by the AV8R FlightStick but the price of the Collector’s Edition bundle is fairly offputting. As a package, it’s worthy of a score of 6… although if you fancy buying the game alone, you should probably knock a point off the score.

This game was reviewed on the PlayStation

Using the joystick really does improve the controls and makes dogfighting fun. With a long solo campaign and multiplayer options, there's plenty to keep you busy

Final Verdict:
FAIR
Mad Catz bundles its new AV8R Flightstick peripheral with a WWII flight sim
A copy of this game was provided by Developer/Publisher/Distributor/PR Agency for review purposes. Click here to know more about our Reviews Policy.