Dark Souls 2: Scholar of the First Sin Review – This Game is Anything But Hollow

If committing the First Sin is wrong, I don’t want to be right.

Posted By Oliver VanDervoort | On 22nd, Apr. 2015 Under Article, Reviews

There are two things you can rely on when you are playing a Souls game. The first is that the game is going to look really pretty. The second is that while you’re staring at the graphics mouth agape, you’re going to get killed over and over and over again. Both of those things certainly came true when I tried my luck in Dark Souls 2 for the PS4. The first thing I noticed when I fired up this game was that it was certainly a prettier game than what I had experienced in Dark Souls for the Xbox 360 many years ago. I also found out that there are still plenty of ways to die really quickly.

From Software, the developer of the game, seemingly wanted me to die early and often and I obliged right out of the gate. When strolling around the very first scene, I actually managed to walk right off a cliff and fall to my death. I wasn’t fighting anything, I wasn’t running from anything, I wasn’t dodging anything, I was simply checking out the scenery and didn’t realize that the ground ended. 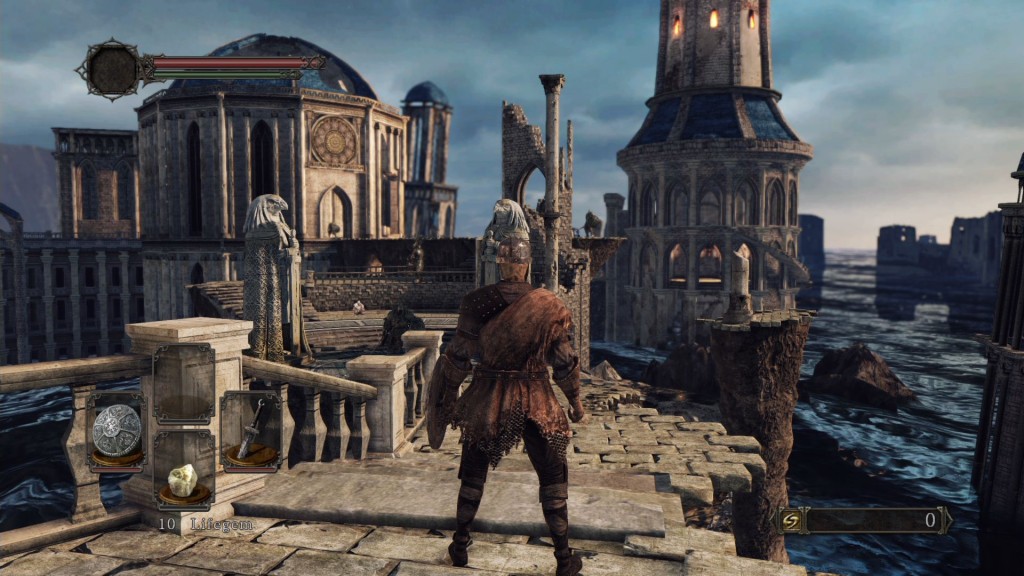 "Dark Souls 2 does indeed weaves the same kind of bleak world I was used to seeing in these games, though it should be pointed out that there are sections of the game that aren't nearly as dark as what I’ve grown accustomed to in the original Dark Souls and Bloodborne."

My second time dying was no less ignominious, though at least this time I was actually killed by an enemy. Early on in the game, I found myself in what can only be described as a witch’s hut, talking to some old crones who were laying out the point of my being in the game world at all. After the initial talk I was sent on my way. Because it’s always my goal to try out as much as I possibly can, I decided to make sure From Software had included a feature in Dark Souls 2 I always found entertaining.

Could I kill anyone I ran across? So I took my weapon and begin swinging it at one of the ladies, who were basically bystanders. I hit her once and she cried out in alarm. I hit her twice and she cried out in anger. The third time I hit her, she started hitting back and her swings took off way more energy than my blows were taking. She killed me. A character I was never supposed to fight ended up taking me down.

My third death made quite a bit more sense, but I’ll get to that in a minute. Dark Souls 2 does indeed weaves the same kind of bleak world I was used to seeing in these games, though it should be pointed out that there are sections of the game that aren’t nearly as dark as what I’ve grown accustomed to in the original Dark Souls and Bloodborne. Those games are clearly laid out to crush your actual soul by bringing nothing but shadows and night. If you run into a room that’s well lighted it’s almost by accident. 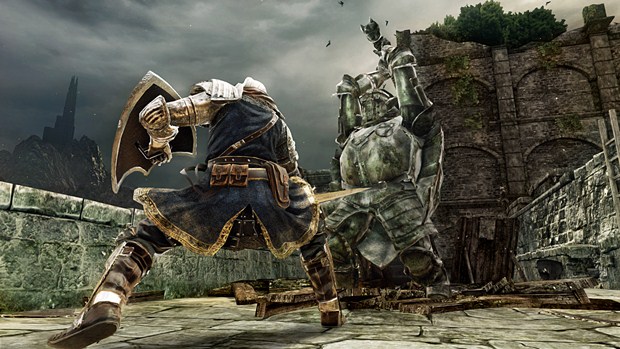 "In Dark Souls 2, the world you are traversing feels to me as though there are more outdoors and I even ran into areas that were lush and green."

In Dark Souls 2, the world you are traversing feels to me as though there are more outdoors and I even ran into areas that were lush and green. In fact, it was here that I met my third death and finally realized that this game is indeed as hard as all the others in the series, even though From Software had famously said they had stepped back the difficulty for those who were getting frustrated in the original Dark Souls. In the forest, not far into the game I ran into one eyed behemoth that was happy to ignore me if I decided to leave him alone. I have to say I liked this particular feature because he truly seemed so big, there was no need to worry about it unless I chose to annoy it.

I did indeed choose to annoy him and while I was able to maneuver around him and blast him with arrows and then hack and slash my way for a while, two blows and I was toast. Enemies that were apparently drawn by the ruckus didn’t help. All of this is to say that everything you would expect from a Souls game is here only done up quite a bit better than I’d ever seen on a console.

The mechanics work well and aren’t hard to figure out. I’ve always felt as though games like Dark Souls 2 were best when I had to work to figure out what did what, as long as I could actually figure it out. It takes some trial and error to get all the controls down, especially if it’s been a while since you played any Souls game at all, but this wasn’t like a game I played recently where throwing a grenade was something hidden so deep, I had to look it up online in order to get the answer. 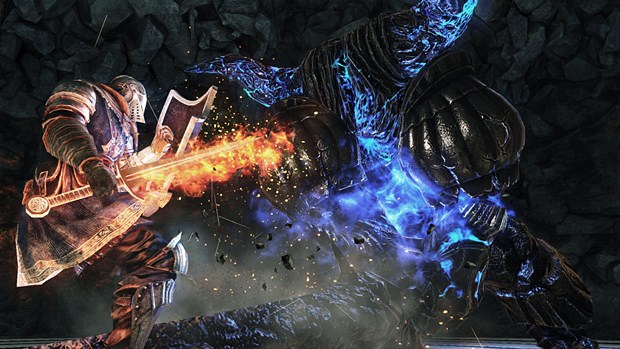 "The same fight mechanics seem to be copied over from the original game, and that will certainly make Dark Souls 2 players happy who are actually looking at Scholar of the First Sin as a continuation of the first game."

The same fight mechanics seem to be copied over from the original game, and that will certainly make Dark Souls 2 players happy who are actually looking at Scholar of the First Sin as a continuation of the first game. Dodging and rolling and getting a hit in when your opponent has his back to you is just as important as it ever was.

In the end, the big difference in Dark Souls 2 is that there seems to be more of a quest of redemption in this game. There are still moments that will taunt even the best players because they won’t be able to figure out what they’re supposed to do in one spot or another. Or they won’t be able to get past a particular boss, but there seems to be less killing for the sake of killing. I was attempting to avoid becoming hollow and because of that, I had something to fight for more than simply to draw as much blood as I possibly could.

As with most of the From Software games, Dark Souls 2 is a huge game. Not only because I had to put a ton of time to play very deep into it, but because there are always spots I realized I wanted to go back and check out. I wanted to make sure I didn’t miss anything. Even knowing this, I’m sure I missed something here or there. The good thing about the Dark Souls 2 is that I wanted to keep going back and figure out what I left behind. I’ll be going back, and then back some more.

The look of the game is striking, especially because you get to see more of the outdoors, and less dungeons.

There are still plenty of places where I was running in circles. The checkpoints are far away adding to more frustration.

Dark Souls 2on the PS4 is as close to perfect as any game I’ve played this year. The game is beautiful and the mechanics are easy. The only thing that ever got to me was when I’d end up wandering around, trying to find the way to move forward. But I’m pretty sure that was intentional on From Software's part.

A copy of this game was provided by developer/publisher for review purposes. Click here to know more about our Reviews Policy.
Tagged With: Dark Souls 2: Scholar of the First Sin, pc, ps4, Xbox One