Morbid fascination with the digital virtues of death.

Why does everyone in this game look like an inhabitant of Castle Grey Skull? Relentless, morbid, and sadistic. Dark Souls has always been a game of two minds. It’s enjoyable and engaging, yet frustrating and merciless. It’s within the captivating essence of what makes the game so enticing that just so happens to be responsible for turning others away. Dark Souls 3 is a game that automatically won me over. Let’s just get that out the way. I’ve dabbled in prior games of the series and I’ve given them a fair portion of my time, but neither Dark Souls 2 nor the original has provided me with enough to keep me entertained.

Dark Souls 3 on the other hand, well, let’s just say trailers and concept art can do a lot. But with that being said, my expectations for the game other than improving upon its predecessors were fairly quite minimal. So why did I choose to play it? Because I’m a sucker for its artistic design and I’ll support any game which places an emphasis on challenge. Real challenge. The world of Dark Souls 3 is filled with dread, torment and misery, and everything within the game’s environment reflects this. Similar to Dark Souls 2 in terms of it’s overall theme the similarities here are one to be expected. That’s not to say there’s nothing within the games’ world that isn’t new, far from it, but given my limited experience with the series and the fact that this was simply a preview build, it’s best described as familiar territory.

"It’s within the captivating essence of what makes the game so enticing that just so happens to be responsible for turning others away."

Superficial, distressful, and beautifully entrancing. The game also appears to have taken a slight influence from Bloodborne, mixing in architectural elements and enemy design while still remaining true to the original aesthetics of Dark Souls. Journeying throughout the game’s world I encountered many strange and bizarre things. Skeletal tombs, candle-lit hallways baron to signs of life, and gravestones, just randomly placed in the obscure of locations. Offering flames to the memorials of these unknown deceased revealed brief information about the games’ lore. “Raised his sword for the lord of cinder” & “This exile was chased from his homeland, and haunted by a black sun”.

I don’t know who these fallen may be but I did find it intriguing.  I’m sure the Dark Souls aficionados out there will piece these together and no doubt discover a link to other games in the series, possibly including Bloodborne. These warning signs are for the most part scattered everywhere and encouraged me to explore during my limited time with the game. Everyone’s dead. And those who are not, well, they’re just a sack of miserable, deluded hacks who for no justified reason have an unhealthy desire attack you on sight. No one in this world seems happy, motivated, or potent with any sense of life.

They simply march up and down anticipating conflict. And it works well with the overall mood of the game, as every creature you spot from afar looks threatening and cunning, making you think twice to find another route. It’s this feeling of unintentional player choice that makes the game so rewarding while simultaneously risky. Should I choose to fight I’ll feel mighty and powerful, given the possibility I survive. Should I loose however, then I’m left with two other choices: Fight again which is what the game originally intends me to do, then prepare to die again. Or, I find myself an alternative route whereby I’ll inevitably do conflict with someone else. Every encounter I had within the game felt like a win/lose situation. A never ending loop of addictive torment, an enjoyable limbo if you will, and it’s brilliant.

" It’s this feeling of unintentional player choice that makes the game so rewarding while simultaneously risky."

What’s interesting about this system of game design is that it falls directly in-line with the pacing of its combat, which has undergone some slight minor changes. Dark Souls 3 provides four classes to choose from: Wandering Knight, Northern Warrior, Herald of White, and Academy Assassin. While the fourth of the bunch resembled a pot-head dropout from the Assassin’s Creed labours school of performing arts and technology, classes two and three looked just as daft and pitiful as their names clearly suggested. So I left it up to the Wandering Knight to show me the ropes, and thankfully enough he proved to be fitting.

Although each class differs each to their own accord with something unique to offer more specific to their class, the game in general felt far more quicker and on the offense than previous titles. Talking in reference to Dark Souls 2, performing five dodges one after the other while still maintaining just enough energy to perform a strike on to my imposing foe without the fear of pushing my own boundaries. Everything feels more free and enjoyable, balanced in such away where battles still feel challenging and again risky, the game feels accessible while still maintaining its overly used term of a cliché: Brutally punishing. In terms of it’s visual design the game remains true to its predecessors while taking things up just a notch on a technical scale.

Textures are sharper, there’s been an improvement to the lighting system, and environments and characters appear to be just a touch more detailed. Whether or not any of this is improved upon more closer to its release is one that’s doubtful, but it does look pretty…in a horrific way. As this was PC version I previewed the game on, being capped to thirty frames-per-second felt largely insulting. This is something the first game was criticized for, rectified with in Dark Souls 2. Whether this changes or not on release is questionable at this point. But it would benefit greatly given the responsive nature and requirements of its gameplay. 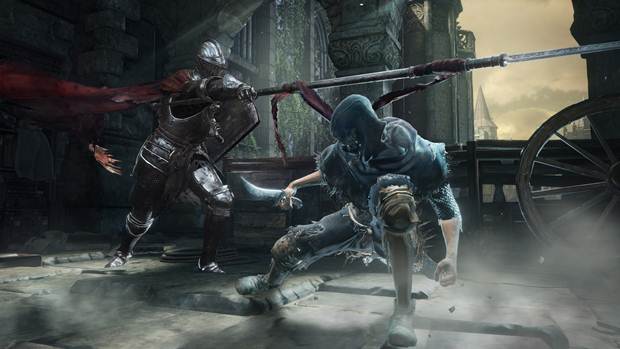 "The game is balanced in such a way where battles still feel challenging and again risky, the game feels accessible while still maintaining its overly used term of a cliché: Brutally punishing."

While my knowledge of the series’ lore is best described as well, non-existent, but as a newcomer to the series I found an enriching sense of mystery to it all. Outside of the games’ combat mechanics which are for the most part unchanged give or take a few new weapons, magical attacks and all-round faster movement, I found this to be one of its most appealing features. Dark Souls 3 is promising, and as someone eagerly looking forward to the game,  ready to sacrifice a good portion of my social life and submit to unfathomable torment of never-ending death, I for one can’t wait for its release.

As of right now my only concern with the game is the frame-rate, as I for one will be making my entry into this world on the PC. And would like to do so without the need of having to wait for a third-party mod, or having to dig through the games’ configuration files in order to unlock it myself. Nevertheless, everything else appears to be on the right path.  It’s funny, Dark Souls is the only game people look forward to where the main attraction of the game is dying, over and over again. To quote Tom Hardy’s stunning performance in The Dark Knight Rises: “You don’t fear death, you welcome it. Your punishment must be more severe”

This game was previewed on the PC at the recently concluded PC Gamer Weekend.