Dark Souls 3: The Ringed City DLC Review – A Dignified End To The Age of Fire

Leaving and recalling the fire forged legacy of the Souls series to deliver a fitting send off.

Dark Souls emerged from the last generation as something of a defining series. Uncompromising and completely unapologetic in every facet of its design, Dark Souls wasn’t here to please you. No, you were going to have to put in some time to come to grips with the deep, interlocking mechanics. Dig into the details to unravel a surprisingly deep lore, and most importantly, prepare to die.

The Ringed City being the final piece of the puzzle and last piece of content for Dark Souls 3, it’s fitting that it should bring together everything the series and developers From Software has stood for, before burning it to the ground. As probably the final piece of Souls content, it all comes together to become something of a microcosm for the series as a whole and a fitting send off for the fans.

Upon entering, the immediately striking thing is the world design itself. FromSoftware masterfully crafted these breathing, haunting worlds throughout their catalog. However, the wreckage of the Dreg Heap piles dilapidated castles and collapsing church steeples on top of each other like so much dirty laundry. Ash covered, twisted remains stretch out as far as the eye can see in a stunning grandeur that’s simultaneously awe inspiring and depressing, and probably their best work. 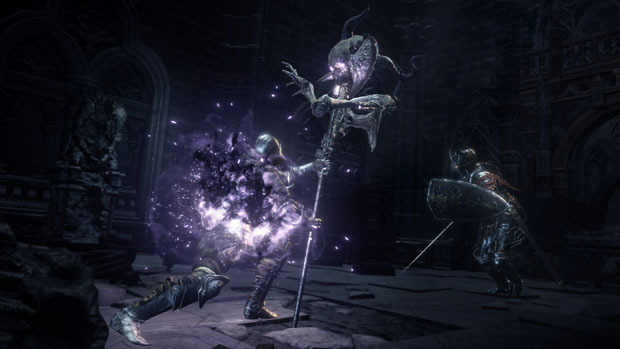 "Ash covered, twisted remains stretch out as far as the eye can see in a stunning grandeur that’s simultaneously awe inspiring and depressing, and probably their best work."

The Ringed City is where worlds come to die after the age of fire, and bits and pieces from the run of the series’ past kingdoms are knotted together and intertwined, yet not called out. In the grand tradition of leaving things to the imagination and attention of the player, FromSoftware’s little wink to the Dark Souls faithful takes liberally from nostalgia without cheapening the new ideas within, or the elegant chaos of the crumbling ruins to a newer player. The largely linear level design isn’t going to throw a ton of surprises, but there are some hidden walls I found, several great loopback points and set pieces to tie together the cacophony of brick and mortar into the same great web the series has weaved for so long.

Not content to lean on the lore to coax players into returning, the brutal enemies can wreck an unprepared adventurer from the first steps. Full disclosure, it’s been quite some time since my last time with a Souls game, and I entered with a level 100 character when 125 was recommended. Going in with any lower will probably result in a bad time. This is one last challenge issued to the Souls faithful by From, and they made you fight for it. 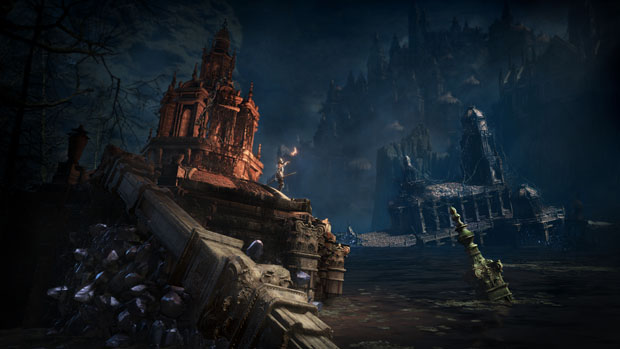 "Bosses follow the mantra of the world itself, twisting the familiar and are all great fun to die to over and over again."

The encounter design and new enemies ramp up the stakes, such as bombardiers who will keep you on your toes until you can find their corporeal body. These bombardiers stand out within a series where you’ve always been able to meet your enemy head on, and they played by all the rules you did. They serve to encourage a stealth approach, which hasn’t been tried in the series before. Though the execution of them and their deadly lasers isn’t as obnoxious as it could be within a series that has never been designed around sneaking, it never quite meshes as well as the straight combat does.

Fantastic bosses punctuate the adventure, far exceeding the previous DLC with massive demons and familiar faces ending their arcs. Bosses follow the mantra of the world itself, twisting the familiar and are all great fun to die to over and over again until you can climb the wall. The last battle is a particularly standout affair, with your foe echoing past conquests within a fight so elegant as to feel almost like a dance. 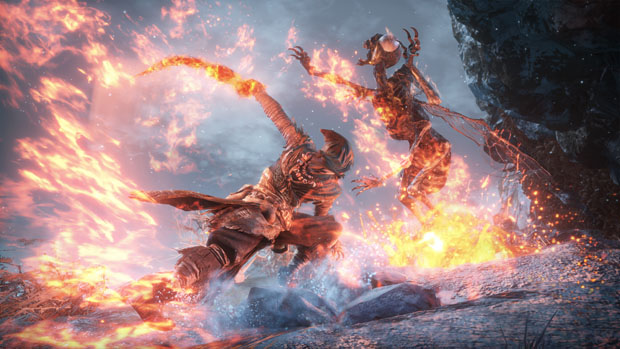 " An encapsulation of everything FromSoftware has done and learned within the last 8 years, all within a send off worthy of the legacy it created."

The twisted world design and intricate encounters are of course, backed by the fantastic symphonies and booming choirs we’ve grown accustomed to through the series. Large and bombastic for fighting, haunting and melancholy when they need to be to set the dire tone. It’s as powerful as ever, backing the journey to the end of the world as you know it, and leaving you feeling fine the whole way down.

Dark Souls 3: The Ringed City is as much a love letter to the fans of this genre creating, generation defining series as it could be. An encapsulation of everything FromSoftware has done and learned within the last 8 years, all within a send off worthy of the legacy it created. Great encounter design, great set pieces and fantastic echoes of the past all stand upon a brilliantly realized, tangled world of pure entropy that’s a delight to take in. Some of the new things they try at the last minute don’t always mesh perfectly, but it’s not enough to break the fully realized journey that FromSoftware presents, and the simple statement it offers.

Won’t you die, one last time?

The Ringed City is a fully realized world with great design and encounters. Fun set pieces and great bosses surprise and recall the series at large. Music meshes perfectly.

A specific enemy type encourages a stealth focus that the game strictly was never designed to facilitate. Demands high skill level, even for series standards, and high in game level to make much progress.

From Software brings the Souls train into the station on a fittingly somber, yet high note with this excellently realized content. The one stumbling block comes from trying new things at a stage where they probably shouldn’t have with introducing the stealth element. nevertheless, as a concentrated showcase of 8 years of Souls and the journey along the way, it’s an excellent send off to the age of fire.

A copy of this game was provided by developer/publisher for review purposes. Click here to know more about our Reviews Policy.
Tagged With: dark souls 3, dark souls 3: the ringed city, From Software, pc, ps4, Xbox One