Well the 2010 releases are beginning with heavy hitters right away. Darksiders is the much anticipated apocalyptic action game from Vigil Games and THQ. Darksiders does not disappoint, as the end of our world becomes the beginning of a lengthy quest through the remnants of our civilization.

You play as War, the first of the Four Horsemen of the apocalypse. War lands in the middle of a battle between the forces of Heaven and the legions of Hell. As he marches through the beginning stages of the end of the world, he begins to wonder where his brothers are and why he is gradually losing his abilities. Finally, War is slain in battle after losing all of his strength and is brought before the Council. They tell him that the last of the seven seals protecting the Kingdom of Man was not broken and that he ushered in the apocalypse early. War, certain that he received the call, demands to be sent back to earth to find those truly responsible and punish them. The Council agrees and sends him back; however 100 years have passed since he was last on earth. The Watcher, whose only goal is to make sure he accomplishes his mission or kill him if he gets out of hand, now accompanies War. From that point, you will begin your lengthy adventure through the wasteland that remains of civilization.

Darksiders is in many ways similar to God of War however Vigil managed to put its own spin of things to keep them feeling different, if only a little bit. Combat is simple but effective, rather than having light and heavy attacks you can attack with your main weapon or a secondary weapon. Your main weapon will always be the Chaoseater but you can choose your secondary weapon and change it at any time by pressing down on the D-pad. Weapons can level up from use up to level 5. There are also boosters that can be found and added to each weapon to add to its strength, as well as new combos that can be purchased from the merchant with souls you gather from slain enemies. 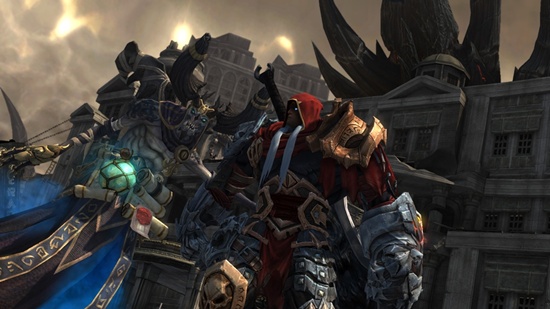 Your friendly neighborhood Vulgrim at your service.

You will also gain access to other gear on tour journey that can help both in combat and in puzzle solving. Unfortunately, these pieces of gear can become quite annoying late in the game when you will have to constantly access the menu and swap out one piece of equipment for another. It does not sound like a big deal, but later puzzles try to incorporate as much gear as possible so you will be switching several times per puzzle.

Speaking of puzzles, Darksiders is full of them. In fact, when I looked at my completion time I saw that combat time only mad up about a quarter of the time I spent with the game, so you had better like puzzles if you want to play Darksiders. Luckily (or unfortunately depending on how much you like puzzles) none of the puzzles are very difficult. Some of the later puzzles will require more thought, but none will require more than a few minutes of thought and planning. The problem with the puzzles is that they feel unnecessarily drawn out. Puzzle areas are generally very large and do not have very much going on. I spent a great deal of time just walking from one part of a puzzle to another rather than, more than I ever spent solving them. In a game like God of War, puzzles are a break in the combat, in Darksiders I found combat to be a short break between puzzles. 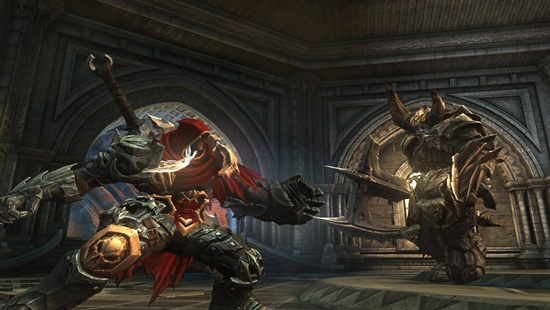 After all the puzzles War needs to smash someone.

Darksiders will take anywhere between 10 and 16 hours to complete on normal difficulty depending on how fast you play and whether or not you explore the world. Considering most games nowadays barely reach the 8-hour mark, if that, Darksiders goes above and beyond to deliver a game worth the price tag. The world looks great and features a fantastic art style. You will go from ruined cities to demonic cathedrals on your journey through this open world. There are some equally interesting characters you will meet along the way, each playing their part in the grand scheme of things. The voice acting is top notch across the board, and Mark Hamill delivers another noteworthy performance as The Watcher.

Darksiders has a few nagging issues that can really take away from the experience. First and foremost is that the controls can be very unresponsive. War apparently has a hard time jumping because if he does not like where you jump he just wont do it. There were several instances where I could not make a jump because War would simply walk off the edge. Also aiming is a bit sloppy and can really hurt your timing on some of the more difficult puzzles. To top things off the Crossblade has a nasty habit of getting stuck on objects or missing targets completely. Considering how many puzzles involve it, it would have been nice if it were more reliable. There are some minor frame-rate drops during big battles and some occasional screen tearing, but none of it is noticeable unless you are looking for it.

Darksiders succeeds at starting the year off right by delivering a solid experience albeit a few bumps along the way. With THQ already promising a sequel, Darksiders is a great start to what could become a fantastic franchise. If Darksiders is any indication of what is to come this year then 2010 will be a truly great year.

Unresponsive controls. Simplistic and drawn out puzzles. Not enough combat.

Darksiders is a lengthy and enjoyable adventure that will leave you satisfied.

A copy of this game was provided by developer/publisher for review purposes. Click here to know more about our Reviews Policy.
Tagged With: Darksiders