DarkStar One was an enjoyable but repetitive game that launched in 2006 on PC. Four years later in 2010 and the game has been re-released on Xbox 360, with Hi-Def graphics and a fancy new name. Sadly though the new visuals and name change can’t bring DarkStar One: Broken Alliance up to speed, and the revamp cannot disguise a campaign full of clichés which could have been shortened to enhance any feeling of fun.

Broken Alliance follows a young pilot named Kayron, who’s father left him a ship called DarkStar One. The ship can absorb ancient artifacts from space and uses them to alter the abilities and look of the ship. Using the DarkStar, Kayron sets out to kill the man he believes killed his father; although the ending will only be a surprise to those of you who haven’t watched Star Wars Episode VI. The copied story isn’t such a bad thing. After all, most media essentially retells the same few story archetypes over and over; but it’s the journey to the conclusion that lets the game down.

Broken Alliance’s graphics are pleasing to the eye, but later areas just seem to be re-skinned versions of earlier zones.

Whether you’re completing story missions or grinding side quests for cash to upgrade your ship, the entirety of Broken Alliance boils down to one of three goals. You spend the entirety of the game either: shooting down other ships, transporting cargo from one area to another (*yawn*) or simply flying off to far-away places in order to meet someone. The result is a feeling of grinding from start to finish, where you’re doing a quest not because you want to, but because you’re trying to make your ship powerful enough to survive subsequent areas – where you’ll be doing similar activities to what you’ve already been doing for hours. If I’d wanted to grind for hours on end I wouldn’t have cancelled my World of Warcraft account.

Thankfully, the space-combat which forms most of the game is actually pretty fun. The dualstick controls on the 360 work great, and the aim-assist the game includes (which shows you where you need to shoot in order to lead the target) makes the combat flow well without taking away the challenge of the game. Generally the larger battles will test you, leaving the player satisfied as they single-handedly annihilate fleets of enemies. Shooting is only one part of what makes combat so satisfying, though. The player ship is incredibly customisable, allowing the player to slot-in specific parts and level-up the ship via the artifacts the player finds. Leveling-up the ship unlocks new slots for weapons, grants additional health and allows the player to equip higher-level items that give the DarkStar One more oomph. 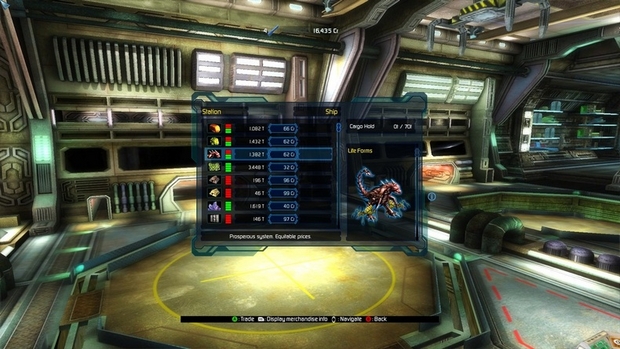 More importantly, leveling up the DarkStar also allows the player to unlock special powers for the ship: giving them access to things like temporary invulnerability, fast-charging shields, or even an EMP that can disable enemies. All of this customisation makes combat more enjoyable because it makes the player feel like they’re playing an active part in their success or failure in battle, allowing them to make important decisions that alter their ship to fit their style of play. Nothing in Broken Alliance feels quite as awesome as surviving overwhelming odds and knowing it was because you’ve made your ship into the best killing machine it can be.

If Broken Alliance were an eight hour game, the combat and RPG elements could have really shined. Unfortunately the game is more like 20 hours, and full of lengthy segments that turn “being an awesome space adventurer on an epic quest” into “being a working stiff who has to grind repetitive missions for cash”. Once you play the first few hours of of the game you will have experienced the entire scope of the game’s content. Further play will only change the skin of the star clusters you’re exploring, and eventually you’ll realize that the designers of the game had some great ideas for a six hour space-combat RPG that they stretched into a needlessly long experience. 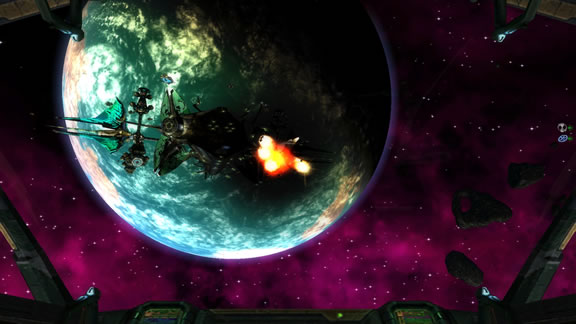 The combat on offer is very satisfactory, and the controls are well-implemented. Only Broken Alliance’s over-use of combat missions detracts from an otherwise solid game mechanic.

DarkStar One: Broken Alliance has a lot to offer people who are easily entertained by doing the same thing over and over, but for the rest of us what’s on offer here is an expensive port of a dated PC title. There are a lot of good things about the game; but they’re just not enough to balance out the bad.

Final Verdict:
BAD
If you want to play a dated port of a Star Wars Knock-off with a gamepad instead of a keyboard, or are easily amused by performing repetitive tasks, then DarkStar One: Broken Alliance could be for you.
A copy of this game was provided by Developer/Publisher/Distributor/PR Agency for review purposes. Click here to know more about our Reviews Policy.