The extent to which Dauntless works and hits the mark on its aspirations is honestly admirable. A part of this has to do with the game’s long gestation period in a beta which was a constant open dialog with the community, causing the developers Phoenix Labs to make tweaks and changes to its systems and mechanics. The result is that at launch, there’s very little to pick apart with Dauntless, and for anyone who is looking for a game in the vein of Monster Hunter to have a throwdown with some ferocious, lumbering beasts, Dauntless is an absurdly obvious recommendation.

Let’s start from the beginning- Dauntless is a Monster Hunter-like, which means that it’s a game that is centered around going out to fight monsters, defeat them, and use their parts to craft better armor and weapons that will enable you to fight stronger monsters with better drops that enable you to craft better gear, and so on. It’s an extremely compelling loop, as the monstrous success of Monster Hunter shows us, so it makes sense that a western developer was going to try their hands at it some time eventually.

Dauntless is very obviously inspired by Monster Hunter, and it makes zero attempt to disguise that fact. Rather, it wears that inspiration on its sleeve. Everything in the game is really a riff on Monster Hunter in some way or the other. I don’t mean that as a criticism- given how potently addictive and fun Monster Hunter can be, this is a high grade compliment. So, yes, you will go out into the world on quests to take on monsters (behemoths in Dauntless parlance) in parties of up to four; you will have to learn their patterns and weaknesses and vulnerabilities. You will have to plan for the hunt. You will have to change your tactics on the fly, because these monsters are anything but predictable. You will have to prepare yourself for grueling showdowns, as these hunts can take anything from a few minutes to a half hour.

"Dauntless is very obviously inspired by Monster Hunter, and it makes zero attempt to disguise that fact. I don’t mean that as a criticism- given how potently addictive and fun Monster Hunter can be, this is a high grade compliment."

In terms of being a Monster Hunter imitation, Dauntless does well. It’s not as obviously polished (in fact, there are a lot of frame rate drops, at least on the base PlayStation 4, as well as server connectivity issues), and also very clearly lacks the frightening extent of content Capcom’s series has- where Monster Hunter offers over a dozen different kinds of weapons, Dauntless has six, for example. Where Monster Hunter can have well over 50 monsters to hunt down, Dauntless has less than half that.

But what Dauntless does, it does very well. Those six weapons are all unique, offering extremely diverse and differentiated move sets, and with very immediately controls that instantly communicate to the player the unique strengths and weaknesses of each. Whether you like having quicker weapons that deal lower damage, but leave you mobile and able to nimbly dodge and sidestep any attacks headed your way, or weapons that let you hit like a tank, but also leave you lumbering and slow, you will find something or the other to your liking in Dauntless.

Then there are the monsters- yes, there aren’t as many of them as there are in Monster Hunter, but what you do get is incredibly well designed, leading to some kinetic and dynamic encounters. While early game monsters are very obvious “attack and run” kinds of affairs, some of the later ones are highly imaginative, demanding close observation and cooperation from the players, and leading to some very fun fights.

But a game like Dauntless involves repeated fights with the same monsters to grind drops and craft better gear, and the shortage of options, in terms of weapons and monsters alike, can pose a long term problem. Dauntless, unlike Monster Hunter, is slated to be a live service, and we already have expansions and further content announced, so this isn’t a problem for long, hopefully- but in the here and now, eventually, as well designed as Dauntless is, it can become a victim of repetition.

"Then there are the monsters- yes, there aren’t as many of them as there are in Monster Hunter, but what you do get is incredibly well designed, leading to some kinetic and dynamic encounters."

To give the game credit, it does attempt to try to allay these concerns by giving the players a frankly absurd number of immediate aims, called Masteries, to aim for. Mastery is essentially like an in-game achievement you get for doing a pre-defined task over a period of time- whether it is hunting down a certain monster in a given period of time, or dishing out a certain amount of damage with a certain weapon, or so on. When the grind for monster parts and better gear can start to wear thin, trying to earn these Masteries can be alluring.

It is also to Dauntless‘ credit that it does its best to slowly unravel its enormous amount of systems and mechanics to the player over time, rather than overwhelming them upfront. Monster Hunter has never been known for being the best with tutorials, and frankly, Dauntless isn’t the best at this either, but it’s good enough that you don’t feel like you’ve just been thrown into the deep end. Dauntless also has some nice QOL touches that make things easier for players- for example, you can change your loadout at any time, simply by heading into the menu. Or, right at the end of a hunt, you are given an extremely clear indication of how well (or not) you did by way of a letter grade. Ahead of each hunt, you are told how well or not you will probably perform based on your loadout, and how it compares to the Behemoth you are hunting’s strengths and weaknesses.

The most incredible thing here is that Dauntless achieves all of this while being absolutely free. Being a free to play game, it does suffer from its fair share of issues: as an example, it lacks the polish Monster Hunter might have, as previously mentioned, and there are a fair few microtransactions. To Dauntless‘ credit, most of these are of the good kind- almost everything you purchase in the game is cosmetic; meanwhile, you have a Season Pass in the vein of Fortnite‘s Battle Pass that you can get your hands on as well; finally, you can buy what are essentially boosters to reduce the amount of time you have between combining “Cells”. 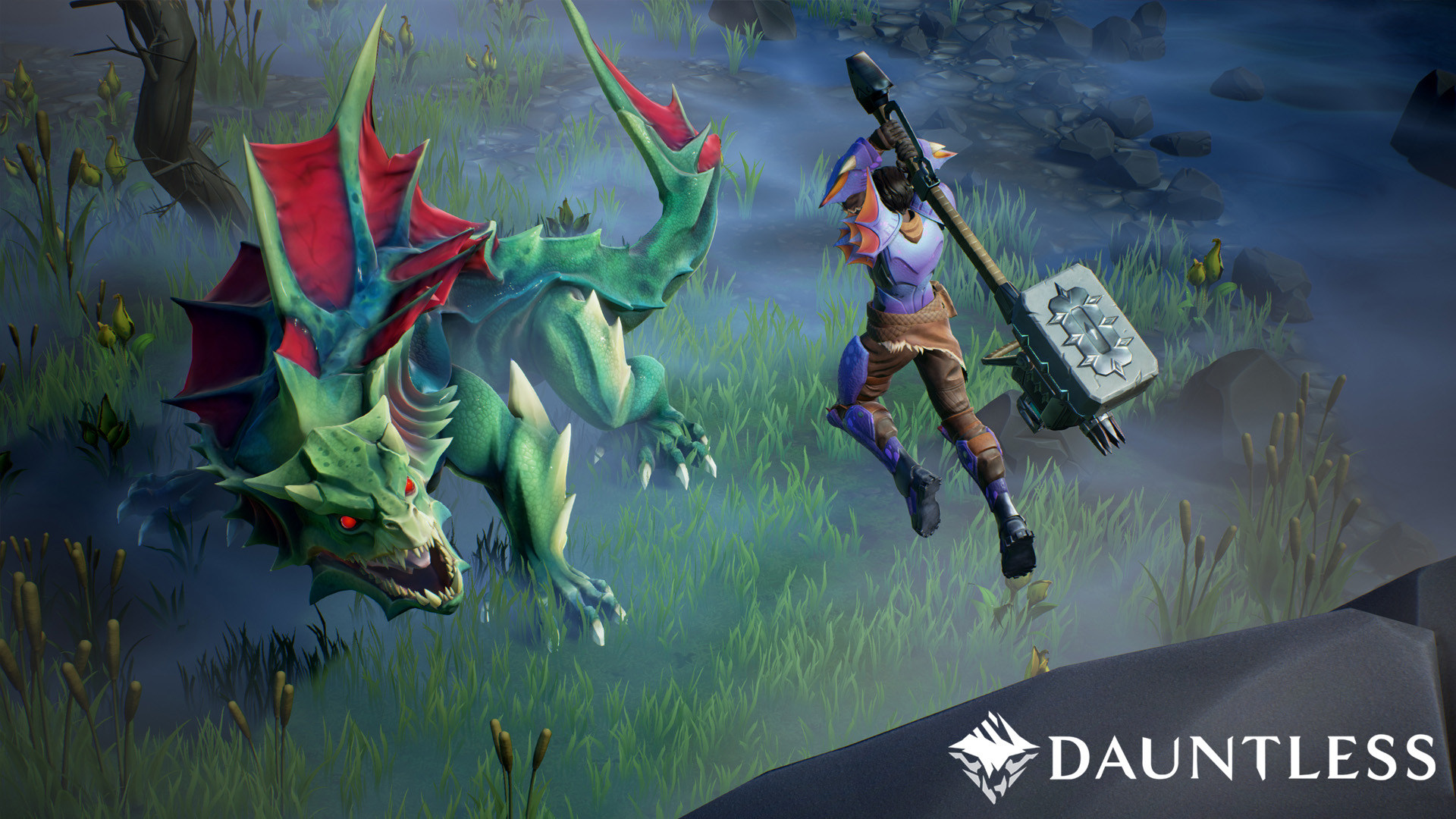 "The most incredible thing here is that Dauntless achieves all of this while being absolutely free."

Which brings me to the Cells. Cells are basically RNG loot boxes, except you get them in game. Cells offer you specific buffs and perks, and can (and should) be equipped to your gear where possible to gain the upper hand. Cells have multiple rarities, and you can combine lower rarity ones to gain higher rarity ones. Higher rarity ones, naturally, have a better chance of giving you a better drop. The Ace Chips, which are the boosters you can purchase, let you reduce the time it takes to combine them. This is really the only part of the whole monetization process that feels unfair, because the wait times can be absurdly long, especially later on once you want to start avoiding getting redundant common drops from these Cells.

Monetization aside, the game is also visually not on par with Monster Hunter, though it has an extremely sharp art style and some fantastic monster and character design that compensates for those deficiencies. Where the visual design suffers, however, the sound design is incredible, and one of the best in games this year, a year which also gave us Resident Evil 2. The sound of your weapons making contact with the monsters is immensely satisfying, and lends weight to each swing and hit. The behemoths themselves sound authentic, and each communicates its current state (angered, wounded, weak) based on its cries incredibly well. Sound design in Dauntless is top notch.

On the whole, it’s a very good game, with potential for true greatness here. There are some obvious shortcomings, some necessary, such as the need for monetization in a free to play game, whereas others that are problems that hopefully get resolved with time, such as a shortage of content. But on the whole, if you like the idea of grinding for loot, or fighting imaginative monsters, or grinding for loot by fighting imaginative monsters, you could do a lot worse than Dauntless.

This game was reviewed on PlayStation 4.
THE GOOD

Final Verdict:
GREAT
Dauntless hits the mark across the board, and delivers an extremely compelling and engaging monster hunting game that genre newcomers and veterans alike can enjoy.
A copy of this game was provided by Developer/Publisher/Distributor/PR Agency for review purposes. Click here to know more about our Reviews Policy.