de Blob 2 is a sequel to the first game which was only released for the Nintendo Wii in 2008.  In de Blob 2 everything is very similar to the first game as it is like a giant coloring book and instead of a crayon you are a Kirby looking blob.  A giant coloring book is the most simplistic way to describe it while the game has much more to it as you use color to complete puzzles that progressively get harder and more creative.  Your not missing anything if you didn’t play the first game as all you need to know is that all the color and music from the world has been sucked dry by the evil INKT Corporation and it’s your job to bring the life back into the world with color by simply touching things while you have paint on you.  The game is definitely family friendly and child oriented but it had that Shrek, kind of PIXAR humor to it that everyone just enjoys.  In fact it almost looks like PIXAR did the animation for the game as that is exactly the art style of how all the cut scenes look.

Each level is timed which I almost forgot most of the time since you gain more time for eliminating enemies, so that wasn’t really a factor that effected the game.  It took me a while to even realize you could die in the game until I came across inkies and their large areas of ink which if you get covered in you must get the ink washed of you or color yourself by dunking into water or color puddles.  You have a certain number of lives but infinite continues, so in the kid friendly sense you really never die.  Everything jiggles in the world like it’s giant jello mold.  Once you complete a level, nice looking CGI scenes are rendering quite nicely and you are then free to roam around that level.  The overall look of the game is actually pretty impressive and smooth in HD, even with an option to play the game in 3D is you have a 3D TV.  From what I have seen on the Wii version of the game, it pales in comparison as far as the graphics go and there is no 3D option on the Wii.

As you color your way to complete each level new areas and objectives unlock.  The game starts off simple giving you just primary colors, but you then have to mix colors together to make new ones to complete certain objectives.  You can go from a free roaming world with buildings to color in a certain way to enter secret areas that turn the game into a 2-D platformer.  Eventually things get way more complex when gravity and time based puzzles enter the mix as well as in depth color puzzles.  You can level up different abilities by collecting a whole slew of different things in the game.  You can gain certain things to eliminate enemies and other creative tools that make coloring buildings a little less boring.  However I suggest you do the collecting in each level once you have competed it since the timer then goes away. 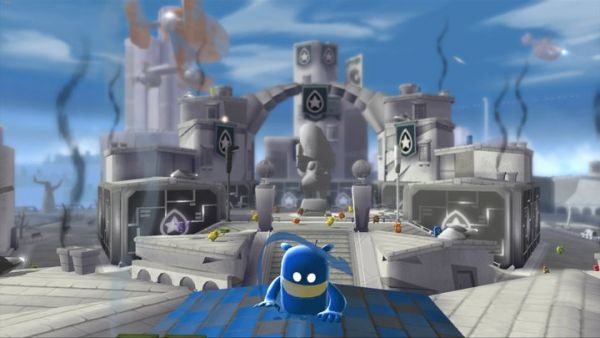 Collecting things in this game is actually fun and rewarding which I usually can’t say when it comes to collecting things in other games for really no reason at all.  Once you collect the required things you will unlock new multiplayer levels, movies, gallery art and upgrades.  Upgrades are important as you can increase Blob’s starting lives, increase your maximum size, increase player 2’s ammo in co-op, increase maximum armor and decrease charge cost.  To eliminate enemies you must charge smash them and in doing so you lose paint which is where the last upgrade comes in handy or you could choose to go for the Achievement/Trophy to not use any upgrades.  de Blob 2 has twelve new single player environments as you must defeat all the different enemies such as Inky Sergeants, Ice Inkies, Space Inkies and Inky Elites taking all over the place all while having to bring color and life back to the world.

There is also an offline co-op mode in the games campaign with had to be one of most disappointing features of the game as I figured I’d load up the game and play with some one, as the second play (Pinky) I was a dot… that’s right a freaking dot.  All I could really do is uselessly splatter color blotches and occasionally help player 1 (the person having fun) as I could color them what ever color I was and I could change my color at well, but at times I forgot I was even playing the game as the second player in co-op. 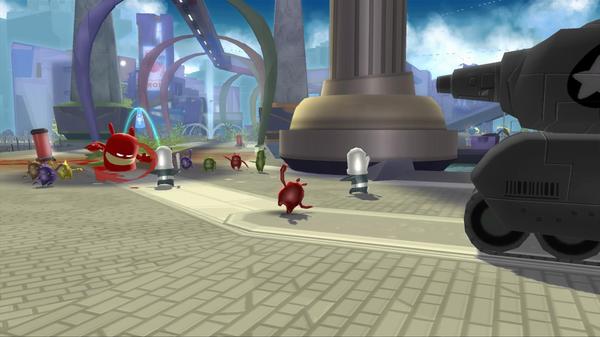 Time to color that tank.

Thankfully, even though there is still no online in the game, there is local multiplayer which gives a variety of different games you can play and you not a dot!  There are nine or so different game modes that you can play with another player, for instance the first being who can color more of the island and bring it back to life in ‘Harmony Cove’.  This part of the game is called blog party and quite fun, it’s just a shame that they did not make it online, with more than two players.  Aside from all this, one of the best parts of the game like in the first one is the music.  You will have to color buildings letting blob people free and then have to color then back to life.  The more color and life you bring to a level, the better the music gets with it’s jazz/funk whatever you want to call it.  It definitely adds to the game, in fact using certain colors in certain ways changes the music.

While this is a family friendly game directed mostly towards kids of a very young age and up, with a very smooth interface, the game was still made very well.  It’s hard for me to review games like this, when I like brutal games where killing things in a gruesome fashion is my kind of game.  Regardless de Blob 2 is fun for people of all ages.  It can get kind of boring after a while but at that time you might get a new power-up which will pull you back in.  Between the humorous cut scenes that a rendered in a great CGI format, de Blob 2 may not be for you, but you won’t know until you try it.. or you have kids because they’ll be sure to love it.

The co-op is extremely disappointing as player 2 could have had more of a role of importance. Can get boring coloring for so long. No online features.

Final Verdict:
GOOD
de Blob 2 is much like a giant coloring book and you play as a Kirby like blob that must bring life back to a colorless world because of the evil INKT Corporation.
A copy of this game was provided by Developer/Publisher/Distributor/PR Agency for review purposes. Click here to know more about our Reviews Policy.