DeathSpank: The Thongs of Virtue Review

DeathSpank, the hack and slash ’em up created by Ron Gilbert of Monkey Island fame, released back in July on the XBLA and PSN to critical and commercial applause. Only a few months later we have a sequel with The Thongs of Virtue that, whilst retaining the same qualities as its predecessor, offers very little new content. It’s still a great game through and through but, unless you’re really itching for some more DeathSpank action, this might not be worth your time.

For those of you who missed out on the original, the only thing your really need to know is that our hero, DeathSpank, must dispense justice by fighting bad dudes and solving quests for various NPCs Diablo-style. There is a vague plot regarding the eponymous thongs of virtue, but it is explained well enough in the intro that a primer is not required here. The story isn’t enough to get you going on its own, but it works as a decent vehicle for the game’s strong sense of humour; and strong it is indeed. DeathSpank is one of the funnier games around at the moment with some of the greatest lines of dialogue I’ve ever seen. This is where Ron Gilbert’s flair for writing really starts to come in, as anyone who has played any of the other titles he has worked on will be immediately familiar with his excellent brand of comedy. 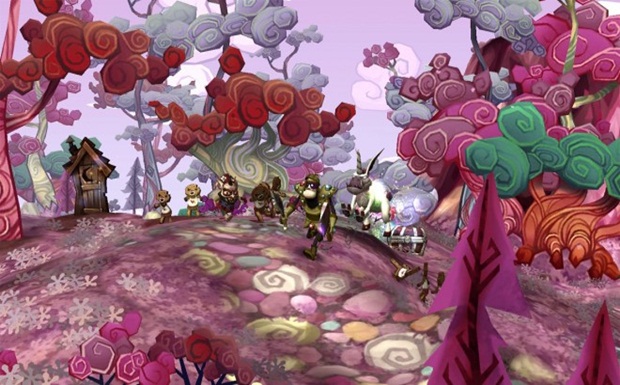 The quirky visual style of the original is retained, partly because the graphics are nearly identical

Part of what makes the DeathSpank experience so appealing, both in the original and ToV, is the incredible voice acting for our hero himself. Michael Dobson is a really talented vocal artist and it would probably be funny enough if he just read through the newspaper in his DeathSpank voice. The rest of the audio is of a reasonable quality as well, but the problems begin when you realise that a large majority of the music and SFX have been recycled from the original game. The same problem pervades the visual presentation of ToV as well. The visuals, whilst still smooth and excellent for an arcade title, are barely improved or altered for this new game.

So has anything been changed at all since the original DeathSpank? There have been a few changes here and there that, at least partially, differentiate the Thongs of Virtue from the original. For starters the game has a more modern setting, meaning that the many swords and axes of the original have now been complemented by a variety of guns and grenades as well. The only other main difference is in the quality of the missions, with much more variety this time around than the standard “go here, kill this” affair that we’re used to in this genre of gaming. That and you also get to sail a pirate ship, remembering of course that the inclusion of pirates immediately makes something better. 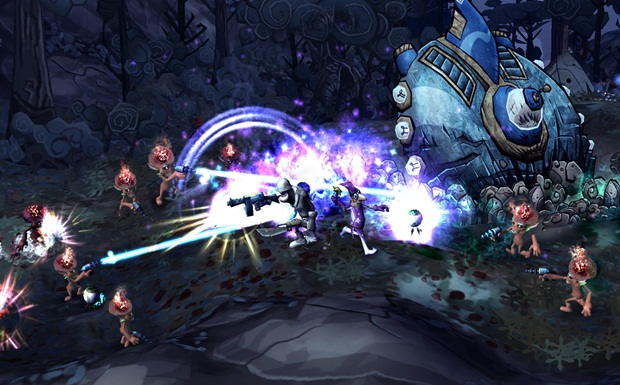 See those guns he’s got? Be honest, you want them

It’s a shame that the core gameplay mechanics couldn’t have been given a bit of a touch up for ToV. The original had fairly balanced combat but, as simple and fun as it was, it could get rather repetitive after a while. The inclusion of the new weapons helps to alleviate this repetition slightly but it’s still in plain sight regardless. The same can be said of the local co-op mode where, even though the inclusion of a new partner character to choose from is a nice idea, it doesn’t change the fact that it’s still quite a dull mode. Regardless of my complaints, the gameplay is actually very strong in the Thongs of Virtue and is still perfectly able to capture the addictive element that many games in the loot ’em up genre possess.

The Thongs of Virtue might not have much new stuff going on over its predecessor, but it has every bit as much content. Expect roughly fifteen hours worth of gameplay based on how many side quests you get involved in. Some may clock ridiculous times if you get into trying to hunt for new gear or grinding through experience points. You’ll also be pleased to know that the achievement/trophy list is fairly solid all around, if a little on the easy side. I was sad to see the excellent menu hero achievement from the original not get an equivalent in Thongs of Virtue, but worse things have happened. 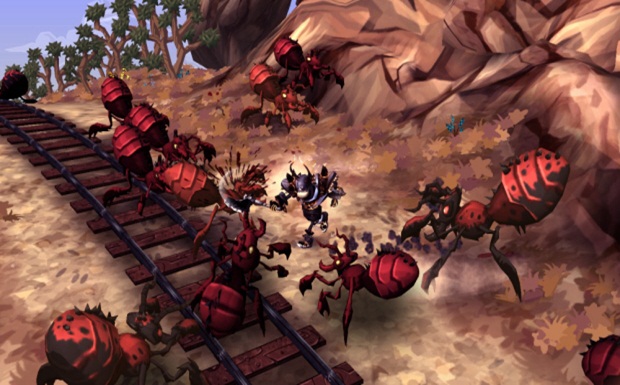 Good thing the code isn’t this… buggy. Mwahaha, I just couldn’t resist that one

Thongs of Virtue is every bit as fun as the original DeathSpank and fans who want more of the same will be well served here. I think my only main criticism is in the pricing strategy. I’m not too bothered by the lack of advancement considering how the original was only released three months ago, but to release Thongs of Virtue as a full priced sequel as opposed to the cheaper DLC that it should have been seems a little greedy. Still, you can rest assured that if you want more hilarious loot ’em up action that your money and time will not be wasted on DeathSpank: The Thongs of Virtue.

the same quality dialogue and voice acting, hilarious through and through, simple and addictive combat, lots of loot to collect, nice graphics

can get repetitive, only a handful of improvements over the original, local co-op could've been better

Final Verdict:
GOOD
DeathSpank returns once again to uncover the truth behind the thongs of virtue but, with the previous game only being released a few months ago and a lack of new content, is this a sequel that could be considered half-baked?
A copy of this game was provided by Developer/Publisher/Distributor/PR Agency for review purposes. Click here to know more about our Reviews Policy.