Demigod comes to us courtesy of Gas Powered Games, their claim to fame being the Supreme Commander series. From large scale conflicts they bring us to a small feud between beings of greater power. Demigod delivers a sense of frantic fun through its intense matches. However the overall package feels a bit lacking when you factor in that there is no single player campaign.

Demigod allows you to play as one of eight Demigods in their struggle for power. A god has fallen and the Demigods must do battle to claim the right to take that gods place. Unfortunately this very interesting premise is wasted with the fact that there is no single player campaign. The style of gameplay is most likely the reasoning, but a story for each of the Demigods could have been very entertaining. 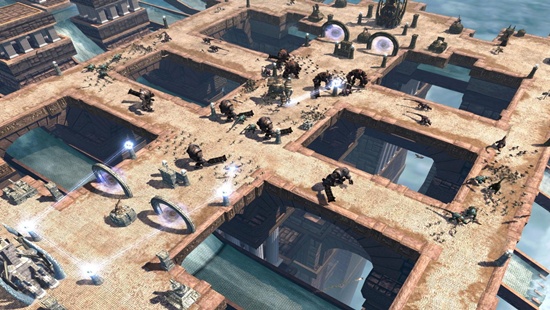 Demigod has fantastic battlegrounds such as this fortress in the middle of the ocean.

Each of the Demigods has their own ability set and unique look from the Unclean Beast’s familiar monstrous look to The Rook, a towering walking fortress. There are two types of Demigods, Assassins and Generals. Assassins are powerful units that can stand easily on their own and often lead the charge against the enemy, clearing a path for the minions to strike. Generals on the other hand can summon their own special units that can aid them in battle. While generals are not slouches in combat, they tend to do better as a second attack wave rather than leading the charge themselves.

The game plays out in a DotA (Defense of the Ancients) style. DotA was a very popular game mode designed by a Warcraft III player. It involves the player using a super unit while A.I. controlled lesser units fight a constant battle. You use your super unit to kill the lesser units and other super units. Demigod uses the same system. You will spend most of your time trying to gain quick XP from enemy minions before going off and engaging enemy Demigods out to claim objectives and flags. Flags can be captured by any side and offer small boosts like increased minion damage or increased experience gain. Fans of the mode in Warcraft III will find Demigod to be a great new way to play it while newcomers can quickly get into the action by playing a few practice games offline. Those looking for a tutorial will be disappointed to find that there is none, but it doesn’t take long to get the hang of how the game plays.

Demigod boasts a fantastic visual design and an even better soundtrack. Levels will have you battling on waterfall fortresses or above what seems like the deaths of hell. It is truly wonderful to take the time to look at how well crafted the levels truly see that they in themselves are an experience to be had. To add to that is the epic soundtrack. War drums will pound as you cross the battlefield slaughtering the weak and while doing battle with other Demigods. There is also a feel of desperation at some points, truly fitting of members of the losing team as they try to turn the tide of battle. It helps to set the mood of the battles so well. There are a diverse and large number of tracks and all of them will keep the intensity up as you fight to the final moments of glorious victory or horrid defeat. Howard Mostrom deserves all the credit in the world for crafting such a brilliant soundtrack. There is also a godly announcer who essentially narrates certain parts of the battle such as Demigod kills or citadel advancements. Believe me, there is nothing more satisfying that hearing him yell “First Blood” and knowing that you were the one to claim it. I’ve had my fair share of early deaths, but most have them have come from my claim of first blood and they have all been worth it. 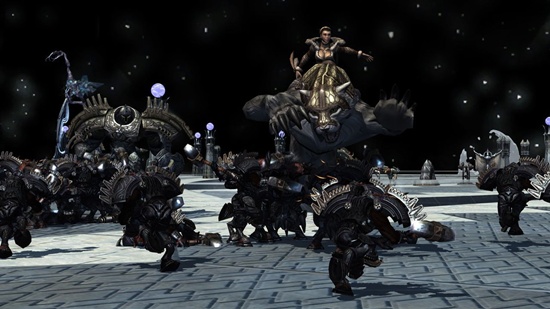 The Demigods are all detailed and even have backstories available in the selection screen.

The only issues online are the lack of players and lag. Unfortunately the game doesn’t have a sprawling user base however those who do play range from newcomers to pros so there will always be someone in your skill range. Lag is found in most games and while it does not make the game unplayable, lag can strike at a time where you need a quick or precise click. Such times can lead to a lost kill or your own death which can become very frustrating in close game or very laggy games. Luckily the game is good about kicking players once their lag reaches an unplayable point. At that point that player’s character is replaced by an A.I. and the match continues.

Faults aside, however large they may be, Demigod is an excellent game that overcomes them by being a game that will satisfy gamers looking for action or strategy. With some outstanding visuals and brilliant soundtrack, there is more to the game than just the game. If you are looking for something different to play but want something that is going to be fun, Demigod may just be the best way to go.

Final Verdict:
SUPERB
Demigod is fun and frantic and will keep you coming back for more, but there is the unavoidable feeling that you are only playing half a game. However it overcomes this feeling by truly being greater than the sum of its parts.
A copy of this game was provided by Developer/Publisher/Distributor/PR Agency for review purposes. Click here to know more about our Reviews Policy.