Playing through Desperados 3, my first impressions were that it looks at a glance like a real-time tactics version of a spaghetti western, infused with XCOM’s strategy and resource management and Hitman’s freedom of choice. In practice, Mimimi Games has taken these aspects and formed something altogether unique, creating a game that rewards experimentation, analysis, and careful planning. Despite inconsistencies in level design and artificial restrictions in its structure, I found myself consistently engaged with creating my own strategies and perfecting my own plans. Desperados 3’s gameplay facilitates the ability to create standout moments within its complex and engaging gameplay, though its inconsistencies hold it back from being truly outstanding.

In Desperados 3, your task in almost every level is one of two things: either kill some people or reach the end of an area, and you can complete these in any way you like. Each level allows you to take control of up to five characters, each of whom has a set of unique skills ranging from firearms to mind control, to sneak your way through progressively hostile and complex areas. While it is possible to go in guns blazing, tactics and stealth are truly at the core of the gameplay. It’s much more advantageous to analyze the environments, scanning for enemy patterns and hiding spots, to let you plan on how to systematically take out a group of goons that vastly outnumbers you, whether it’s distracting them to walk out of another’s line of sight or sniping them from across the map. For example, you can whistle to alert an enemy and have him walk into a bear trap, or you can use Kate’s disguise to distract him. Every character’s abilities are varied to allow you to use the entire environment, though their differences in strengths force you to prepare for which character is best for a certain task.

"Desperados 3’s gameplay facilitates the ability to create standout moments within its complex and engaging gameplay, though its inconsistencies hold it back from being truly outstanding."

Having a bunch of different ways to kill enemies doesn’t mean that each one will always work, and Desperados 3 encourages you to try different approaches regardless of how likely they are to actually succeed. One of the first things it tells you is that quicksaving is the name of the game. While there are no automatic checkpoints, default settings allow for infinite saves per level and a reminder for when you haven’t saved in more than a minute. It’s a handy reminder in the heat of the moment, though its screen placement makes it frustratingly obtrusive. While the constant saving is a fantastic safety net in times where things go awry, the few seconds it takes every time it saves and loads adds up over the course of hundreds of saves and retries, and the restriction to loading only the past three quicksaves makes for a system that rewards experimentation but punishes you for going too far on a plan that won’t work.

By creating a system that encourages you to attempt anything and everything, it draws a surprising comparison to fast-paced games like Hotline Miami. It’s built around trying and failing, and it rewards you for finding whatever works, whether you’re able to make it through a level without raising any alarms or have to resort to hiding until they let their guard back down. Though times when you feel arbitrarily stuck are frustrating and somewhat common, the game’s best moments are when it makes you feel clever for organically allowing you to find your way forward using the tools it’s given you without having them feel contextual. Assets like environmental kills and ammo boxes feel like they’re there to tell you how to play, but when I could take the time to look over every enemy’s patterns and ultimately pick them off one by one the way I thought best and without recommendations from the game, I felt like a fully in-control mastermind.

One way the game does this is through its Showdown Mode, which pauses time and lets you plan multiple actions at once. Some areas require this mode to kill multiple enemies at once, but many other times it’s another powerful option in your arsenal. This mode can get frustrating, as it feels inconsistent in how many steps ahead it lets you plan for each character, but when it works, it’s powerful and thoroughly satisfying to watch. It’s often impressively dynamic in how enemies will react in certain situations, too, such as how they’re able to see and follow footprints or see through a disguise if you act suspiciously. The lack of permanent escalation or suspicion after alarms are raised, though, seems like a missed opportunity to further encourage stealth and discourage toying with the system. 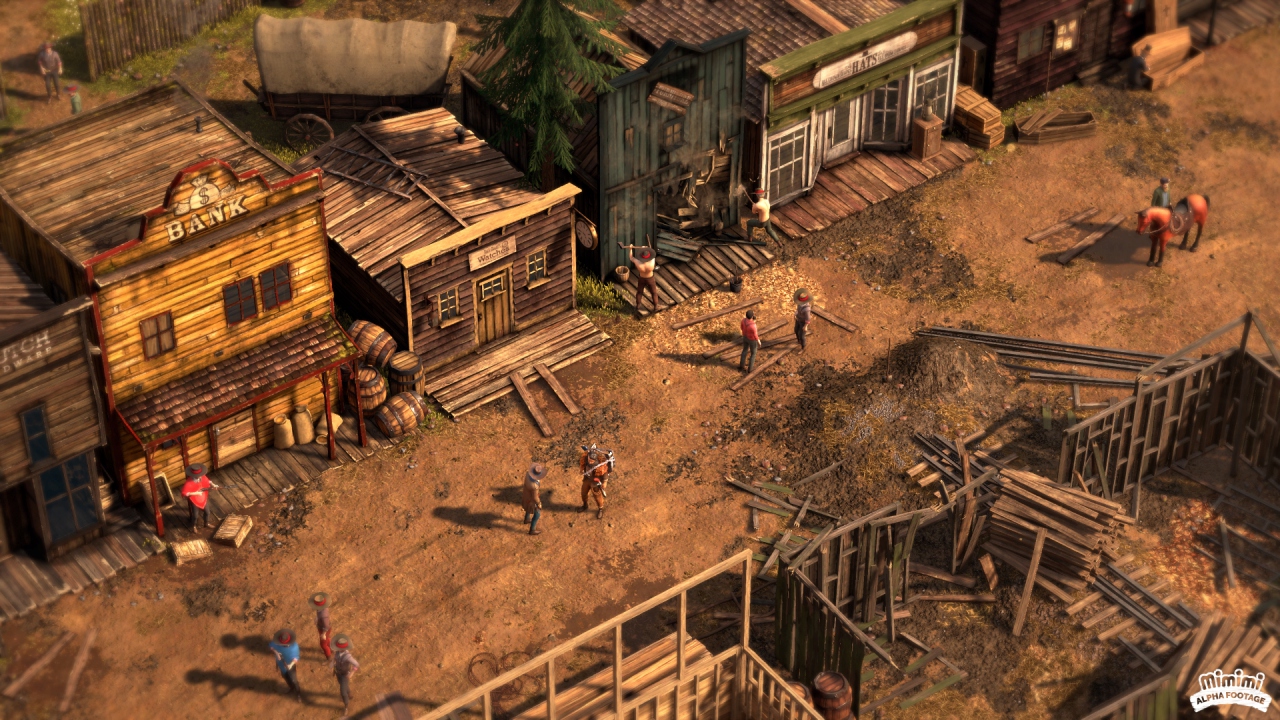 "By creating a system that encourages you to attempt anything and everything, it draws a surprising comparison to fast-paced games like Hotline Miami. It’s built around trying and failing, and it rewards you for finding whatever works, whether you’re able to make it through a level without raising any alarms or have to resort to hiding until they let their guard back down."

Desperados 3’s campaign takes you through 16 total levels spread across three chapters. A prequel to the previous games, the story centers around John Cooper and his quest to find and kill the man who killed his father. As you’re joined by the four other characters, the story tends to take a backseat to the gameplay, especially because the isometric camera creates an inherent emotional disconnect. Because of this, the plot is mostly relegated to loading screen text boxes, as the pre-level cutscenes generally introduce the layout of the level more than the motivation itself. While there are a couple standout story moments that add context and depth, it feels relatively insubstantial to the overall experience.

The journey around the country facilitates the level and environment design, though, which is generally complex and often impressively diverse. Environments range from the rocky New Mexico deserts, some of which start to feel repetitive, to the swamps of New Orleans, which are undoubtedly the highlights of the freedom, verticality, and complexity in the level design. Some levels allow you to walk through non-hostile areas and hide in plain view, while others force you to jump from bush to bush to remain out of sight. What can become disappointing is how many levels feel artificially drawn out. While attempting and retrying plans takes time, I often felt like I was repeating the same plans for dozens of enemies over the course of levels that took 2-3 hours each.

One of the game’s strengths is how well it allows you to create your own strategies and execute them at your pace, so rewarding repetitive strategies actively works against what the game does best. This is also prevalent in how many levels artificially restrict who participates in your group. The best levels are those with more of the five characters present and playable, but most levels either only have a couple of them or split them up so they can only work together near the end. It often feels like it’s finding reasons to have less complexity rather than create opportunities for varied strategies that include everyone’s strengths. 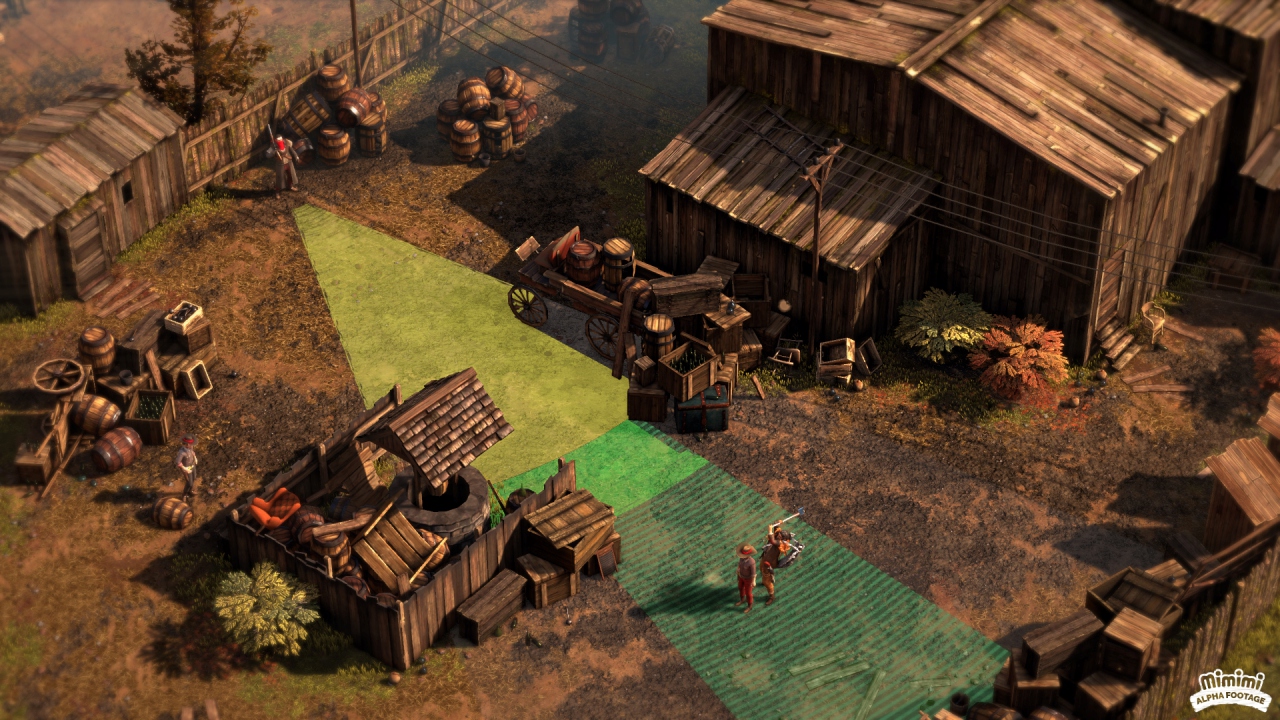 "The plot is mostly relegated to loading screen text boxes, as the pre-level cutscenes generally introduce the layout of the level more than the motivation itself. While there are a couple standout story moments that add context and depth, it feels relatively insubstantial to the overall experience."

One issue that most levels run into is that the freedom of control runs into problems with the camera. You can zoom and rotate the camera at any point, but levels sometimes feel at odds with each other as to whether they want you to rotate the camera. Some of the environmental verticality blocks other features or enemies if you’re not looking in the exact right direction, and the camera can be an all-around hassle to control, from its wonky zoom controls to its inconsistent centered view.

Despite a wealth of inconsistencies in its gameplay and level design, Desperados 3 often makes the most of its real-time tactics gameplay. While it tends to create artificially drawn out levels or contextual kills, its highlights come when it removes any overt hints and lets you figure it out for yourself. Its encouragement to experiment with anything you can think of allows it to bring out the clever mastermind in the player, even if its quicksaving feature and camera hinder true freedom. There’s no perfect aspect of Desperados 3, but I always wanted to push forward in spite of its problems to see how I could use my powers as an outlaw in another unforeseen crafty way to outsmart the seemingly unbeatable enemies in front of me.

Final Verdict:
GOOD
While its structural, environmental, and contextual inconsistencies hold Desperados 3 back, its ability to facilitate clever and crafty strategies in its best moments kept me coming back for more.
A copy of this game was provided by Developer/Publisher/Distributor/PR Agency for review purposes. Click here to know more about our Reviews Policy.