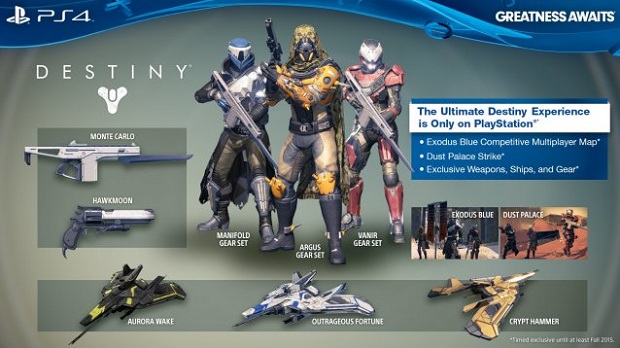 Well the PlayStation 4 is set to receive its own exclusive content and the details surrounding it were, for a time, kept secret. But no more! Amazon, the online retailer, have revealed what will be bundled into the exclusive package for the PlayStation 3 and PlayStation 4.

So. What have we got?

Last, but by no means least are the PlayStation exclusive maps, the Exodus Blue pvp map and the Dust Palace strike mission.

Now, keep in mind that this is a time exclusive until sometime around fall 2015, so Xbox Gamers will indeed be getting their own version of this content in due time. So if you were going to start calling for a fanboy war, you can stop. It’s just companies doing business.