Digimon Story Cyber Sleuth: Hacker’s Memory Wiki – Everything You Need To Know About The Game

Everything you need to know about Digimon Story Cyber Sleuth: Hacker’s Memory. 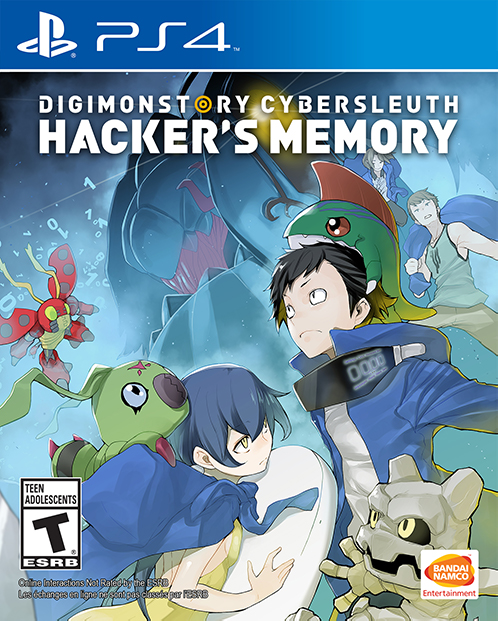 Digimon Story Cyber Sleuth: Hacker’s Memory returns to the Neo-Shibuya and Digital Eden, the setting of 2015’s Digimon Story Cyber Sleuth. The game retains quite a lot of elements from the previous title, including available Digimon, gameplay mechanics like its Shin Megami Tensei lite style battle system, and entire in game areas like the Pokemon series.

First announced by V Jump Magazine as the follow up to the original title in March 2017, Digimon Story Cyber Sleuth: Hacker’s Memory was revealed in March 2017 for release in Japan later that same year on December 14th. Masafumi Takada would return to create the music for the game and Suzuhito Yasuda would reprise his role as character designer. The game is a side story that shows events important to 2015’s Digimon Story Cyber Sleuth from the perspective of Keisuke Amazawa, a young man who becomes a hacker to clear his name from a crime he didn’t commit.

Through different interviews such as one given to Siliconera by producer Kazumasa Habu, it becomes clear that Hacker’s Memory was created somewhat as a stopgap game. The success of Cyber Sleuth overseas was the driving factor in the decision to develop the next Digimon Story title with the PlayStation 4 as the lead platform. However, as that would necessitate the rebuilding of the game engine and visual assets from basically nothing, and create a long wait between titles, Hacker’s Memory came about as a way to get something new to the fans in the meantime.

Creating a side story on the established Cyber Sleuth allowed the team to create Hacker’s Memory and release it just under two years after the original Digimon Story Cyber Sleuth. According to that same interview, maintaining consistent releases is important to the Digimon IP and the branding as a new Cyber Sleuth game instead of a new Digimon Story game was intentional to understanding what the game was. 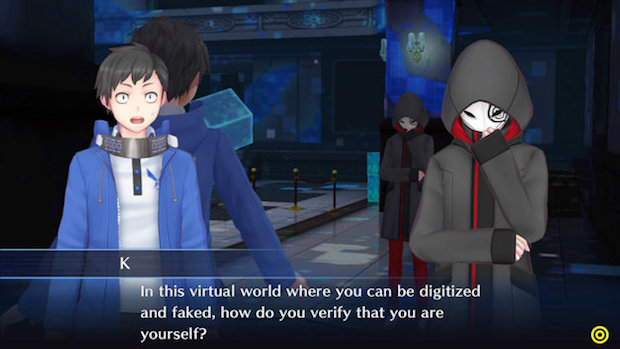 The game is something of a Majora’s Mask style side story to the original Digimon Story Cyber Sleuth. Timeline wise, the title takes place more or less alongside the last title and major characters and story elements return, just viewed from a new perspective.

This time the lone player controller character is Keisuke Amazawa, an otherwise normal young boy who is thrust into Eden when he’s framed for a crime he didn’t commit by cyber-identity thieves. In order to clear his name, he joins up with the hacker group “Hudie” and searches for the real culprit on his own. He is supported by Erika Mishima and her Wormmon, with Erika being somewhat special in her own right. Many characters return in both major roles and cameos from Cyber Sleuth’s characters, among others. The journey of Amazawa will show the player new angles to the story of Cyber Sleuth and what characters were doing offscreen in that game. 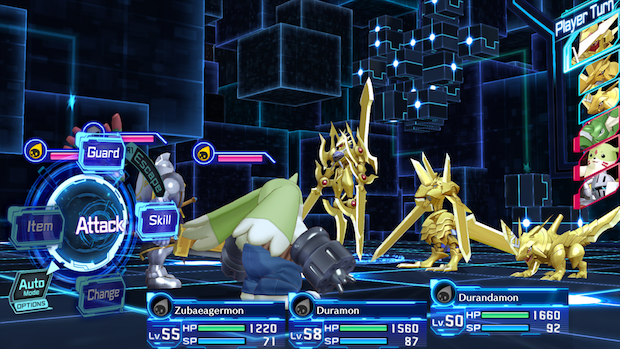 Digimon Story Cyber Sleuth: Hacker’s Memory makes use of a majority of the areas, both real and digital first seen within the original Cyber Sleuth, Though several new areas are also created for this title. Players will dungeon crawl from a third person perspective, solving basic puzzles and grooming his Digimon companions to battle against aggressive Digimon and other hackers who would end his quest.

The battle system can largely be likened to the Shin Megami Tensei series, as well as offshoots of it like Persona. Battles are turn based affairs with the turn order evident to the player along the side of the screen. Up to three Digimon can appear per side, and up to 11 Digimon can be carried with the player at any one time. Digimon fall under three different affiliations, being either Data, Virus or Vaccine, each having a Rock/Paper/Scissors relationship to the other two. Attacks can follow along similar elemental properties, such as Plant, Water, Wind, Dark, Light, Fire, ect. Attacks can have additional effects. The kinds of moves that grant those effects often also burn SP which is needed to power them.

By battling, Digimon can reach various thresholds which allow them to Digivolve. However, unlike the Pokemon series, Digimon can degenerate to previous forms while maintaining relative strength, the Digimon will in return see higher stat growths when it continues to grow, which is usually necessary to achieve higher forms later in the game. Players don’t capture Digimon, and will instead through repeated encounters with specific monsters collect enough data to spawn them on their own, and from there be able to influence how they develop.

New to Hacker’s Memory is the Domination Battle, where two hacker teams take each other on in turn based strategy maps. A similar example is seen from Megaman Battle Network 5’s Liberation missions. where the player commands a team of hackers against the enemy, with various victory conditions from map control to just earning enough points by a time limit. Outside of the strategy elements of the larger battles, fighting against the enemy team uses the same battle mechanics. 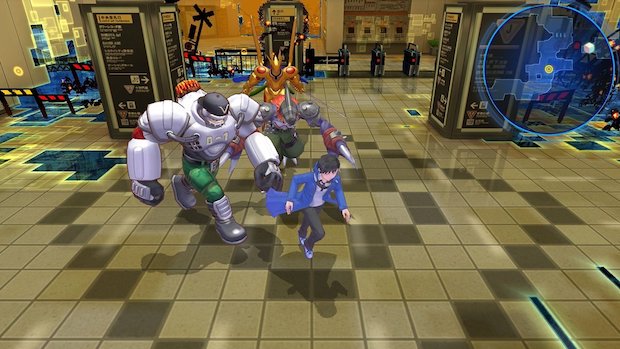 Keisuke Amazawa is an ordinary young man who’s just trying to live his life in the digitally advanced near future setting of Neo Shibuya. After being framed for a a crime he didn’t commit, he promptly escaped into the Eden Underground where he is still wanted by the government.He hopes to clear his name by tracking down the criminal who stole his identity to begin with.

Amazawa is supported by Erika Mishima, a brilliant hacker who has the amazing ability to link her mind directly with the EDEN Network to hack it. She partners with Wormmon, who serves as Hudie’s mascot. Her brother Ryuuji leads Hudie and is the one who talks Amazawa into joining the hacker group.

Another helpful face is Shitose Imai. A sociable young man who creates his own hacking tools with his Ankylomon. You Nogi is an old childhood friend of Amazawa who becomes wrapped up in the story as things progresses.

Standing against Amazawa is K, a masked hacker who also has an interest in the same criminal who framed Amazawa for his own, unknown reasons. His appearance and what drives him are both mysteries. They use SkullSatamon as a partner, so of course he has only the purest intentions. Throughout the story of Digimon Story Cyber Sleuth: Hacker’s Memory, major characters from throughout that entry will show up in some capacity, though the exact roles they play varies from relatively major such as Yuuko Kamishiro, the young woman who hired the Kuremi detective agency to investigate her father’s death connecting with Amazawa at points, and occasionally running across Arata, and with cameos from many others.