From humble beginnings in 1998 as the fully-licensed and official game of the World Rally Championships, the Colin McRae series has come a very long way. With DiRT 2 the last title to feature his name and DiRT 3 still possessing his ‘influence’ and ‘ethos’, apparently, DiRT Showdown is perfect microcosm for this new era in Codemasters’ proud racing history, the first child of the Codemasters Racing label. That said, a game where the primary objective is wanton destruction wouldn’t exactly be a befitting tribute to a man who tragically died in a helicopter crash along with his 5 year-old son and several close family friends.

Pining after Mister McRae aside, Showdown does feel like the logical progression for the series, and as sad as it is to say this, a thoroughbred rally game just wouldn’t cut it anymore. In an age of Monster Khaos, with a K, and True LAD, one cannot be simply worrying about what sort of suspension setup would be more appropriate in the gravel-laden New Zealand countryside, we’d rather be causing severe spinal damage to fictional Europeans in Vauxhall Corsas.

DiRT Showdown is just about the most bombastic racer going, even the menu falls out of the sky like a concrete donkey, with the entire game covered in a thick film of crisp, bright colours. It’s okay to take a leaf from the Big Book of Burnout, but the decaying, termite-ridden branches of this tortured metaphor? I doubt there’s a single person alive to fondly recollects the parts in Burnout 3 where DJ Stryker was speaking, using the word ‘radical’ like a ordinary people use cutlery, like Criterion watched Bill and Ted and thought ‘Yes! This is the sort of person we want playing our game’. At least they had the decency to let the player disable him, the best I can do with the criminally irritating Christian Stevenson is send him to half-volume, which is almost worse. You can’t hear exactly what he’s saying but you know he’s still there, making laboured attempts at witty observation making Stryker, and to a lesser extent Atomika, sound like David bloody Attenborough. 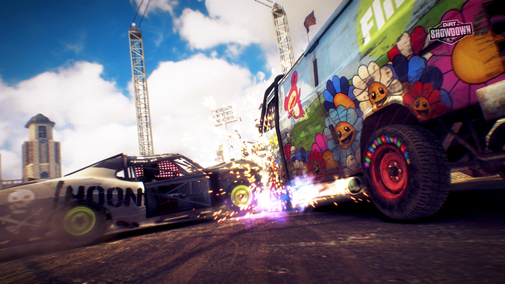 Embittered muttering aside, impact between vehicles pack a satisfying amount of punch, but you’re often feels like they have something to be desired. The ‘Crashback’ replay function, which pops up for particularly brutal encounters, seems needless when very crashes very rarely seem to carry the sort of spectacle that’d warrant repeated slow-motion recollection, lacking the finesse of Burnout: Paradise. In that sense it almost feels like the FIFA Street of the series, whilst taking a different direction to the core franchise it still seems to be based on essentially the same game engine a games gone by with only a few tweaks for good measure.

That said, for everything Showdown does worse than Burnout, it manages to so something better. It is truly a joy to drive in Showdown. Cornering is weighted just enough for drifts to feel both challenging and rewarding, without being too ‘realistic’. Yes, it’s clearly an arcade title but that doesn’t mean that cars have to feel like they’re made of paper and dreams. Heavy, bulky cars feel as such and your opponents with think twice about a head on showdown. Likewise, the feathery but nippy gain a significant enough speed advantage for them to be in consideration, but so much as a gentle prod will see you spinning wildly into oblivion.

Game modes have a welcome degree of variation, and whilst Showdown isn’t exclusively a smashy-smashy affair, the better game modes are the ones with the most carnage. 8-ball is a tidy mixture of racing and chaos, unbridled Banger Racing on an often-intersecting circuit. You will be frequently side-swiped into last place, unfairly punished for something almost entirely out of control but rather than feeling like a burden, it adds a marvellous degree of unpredictability and you’ll give as well as you’ll get. One of the few non-destructo gametypes is Hoonigan, sounding like Jools Holland at new year, it plays like a Super Special stage as done by Boy Racers. Competing head-to-head, you’re tasked with getting to the finish line as quickly as possible, performing specific ‘tricks on the way’, ranging from drifting and donuts, to crazy jumps. 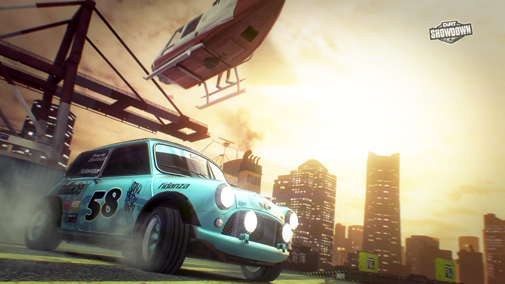 Like every Modern Game going, online play requires a VIP pass, £6.29 for the scoundrels who dare to buy second-hand, but Showdown also bucks the trend of Modern Gaming, Showdown features my old friend split-screen multiplayer. Far too few games, racing titles especially, seem to be entirely devoid of any local fun so it’s hugely refreshing to be able to play with real people, in the same room, at the same time. Okay, it’s only two-player, plus up to 6 AI, but at least it’s there.

DiRT Showdown is clearly no longer under the pretences of simulation and rightly so, previous DiRT games seemed to skirt a fine line between arcade and realism and whilst it worked pretty well, it’s pleasing to see Codemasters have made up their mind. However, Showdown loses more than a few marks for letting me exile Christian Stevenson to the land of wind and ghosts. It’ll be interesting to see what path DiRT 4 take and wether it follows in Showdown’s footsteps or reverts back to type. It’s certainly a solid entry into the series but doesn’t quite feel finely-tuned enough to be a… smash-hit. I’m so sorry.

Final Verdict:
GOOD
DiRT Showdown is just about the most bombastic racer going, even the menu falls out of the sky like a concrete donkey, with the entire game covered in a thick film of crisp, bright colours.
A copy of this game was provided by Developer/Publisher/Distributor/PR Agency for review purposes. Click here to know more about our Reviews Policy.