Dishonored PC Review – A Refreshing tale of Betrayal and Revenge 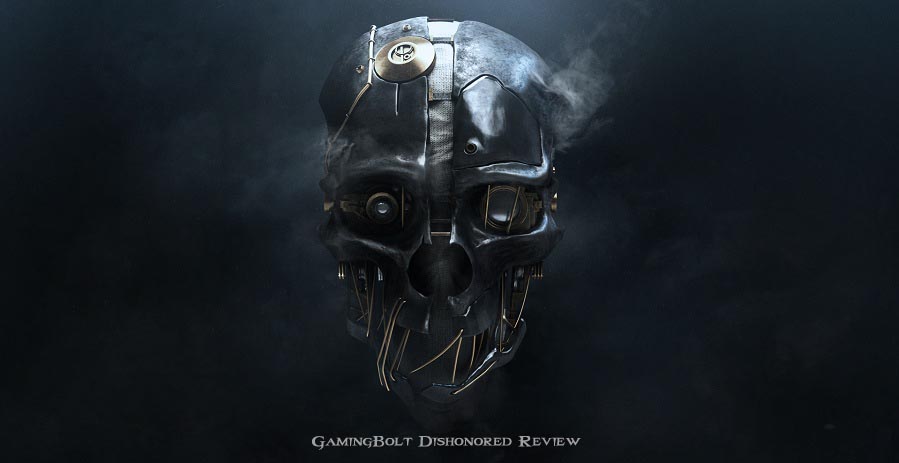 When Arkane Studio’s presented the Dishonored concept last year, I was smitten by it. It was unique, refreshing, and also something which we don’t really see nowadays–an old school stealth game. As a big fan of stealth games in general, I knew it would be a hard task for Arkane to live up to their promises, but I was wrong.

Dishonored is a fantastic game.

Dishonored’s main protagonist, Corvo, finds himself at the center of a huge conspiracy involving the Empress and her daughter, Emily Kaldwin. The Empress meets her end at the hands of a mysterious assassin who had come prepared with his goons.  Emily is kidnapped in front of Corvo–who was also the royal bodyguard of the Empress. 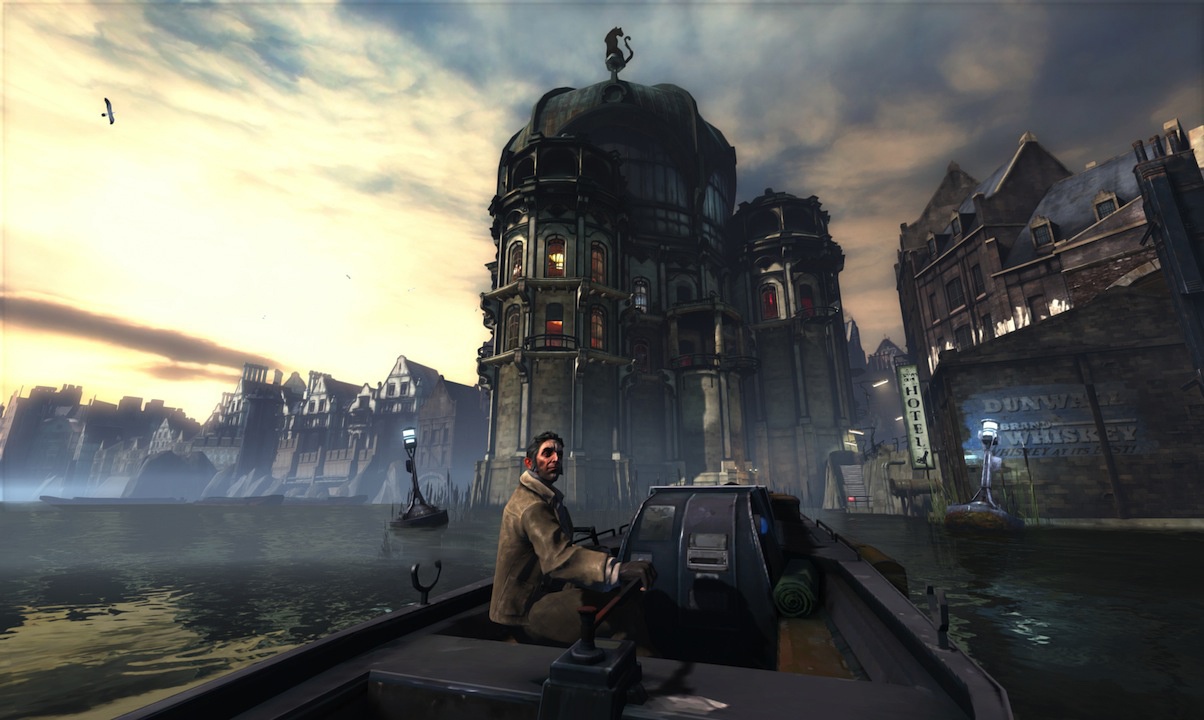 The assassin’s vanish leaving the failed bodyguard vulnerable, dazed, and confused. He is then thrown in prison and is blamed for killing the Empress. His world is destroyed in an instant. It’s time for revenge. You must have read such stories before, but the way the game starts set the mood initially makes a big emotional impact. As you take control of Corvo, staring at the desolate cell invoking feeling of hopelessness, you are eventually offered a way out of the cell.

As you pick up a sword, and try to exit the first area, you are faced with three guards. So what do you do now? Slit their throats, or sneak past them? The latter is preferred because this is not a game where the enemies will not put up a solid fight. You will die fast if you face yourself surrounded by a bunch of them. Why go that route anyway? That’s not satisfying–not at all. What’s satisfying is ghosting past everyone and leaving them bewildered thinking how the hell did you manage to do that.

The satisfaction you get after pulling a difficult sneaky escape is something that makes all the time spent so much worth it.

You can, however, engage them with your sword, pistol, crosswbow, or a myriad of powers available at your disposal. Yes, you heard that right. Dishonored gives you a lot of abilities to sneak past or manipulate your enemies. One such ability is Blink, which allows you to teleport past enemies or reach locations that you normally can’t on foot. Sounds overpowered, doesn’t it? It is. I will explain why I feel this way later. 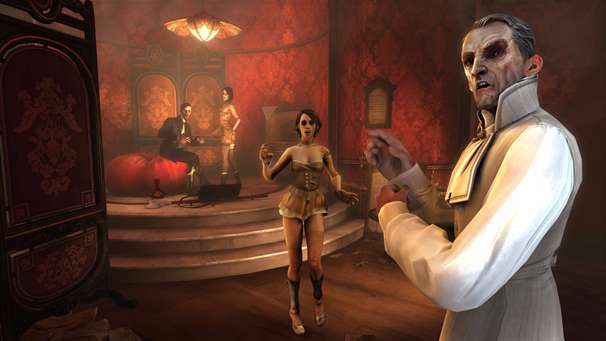 There are abilities which will incinerate any enemy that you kill stealthily, or allow you to see through walls. The game doesn’t force you to use them either, and it’s something that I consider as a very positive example of game design.

It’s such a joy to instantly teleport behind a guard and knock him out, later dumping his body in a place no one visits.  Bodies can be found, however, and will count toward your rating at the end of each mission. If you play the way a master assassin should, you should be able to ghost a mission. There are ways to not directly kill your prime assassination targets, and do something non-lethal instead.

Dishonored allows you to complete any mission the way you want–lethal or non-lethal. There are multiple ways to take down an objective. The powers in your arsenal can be used to create unique scenarios that will undoubtedly make you devilishly grin if successfully pulled off. You can be a psychopathic murderer or a lover of kittens. You will get complete satisfaction either way, I assure you. 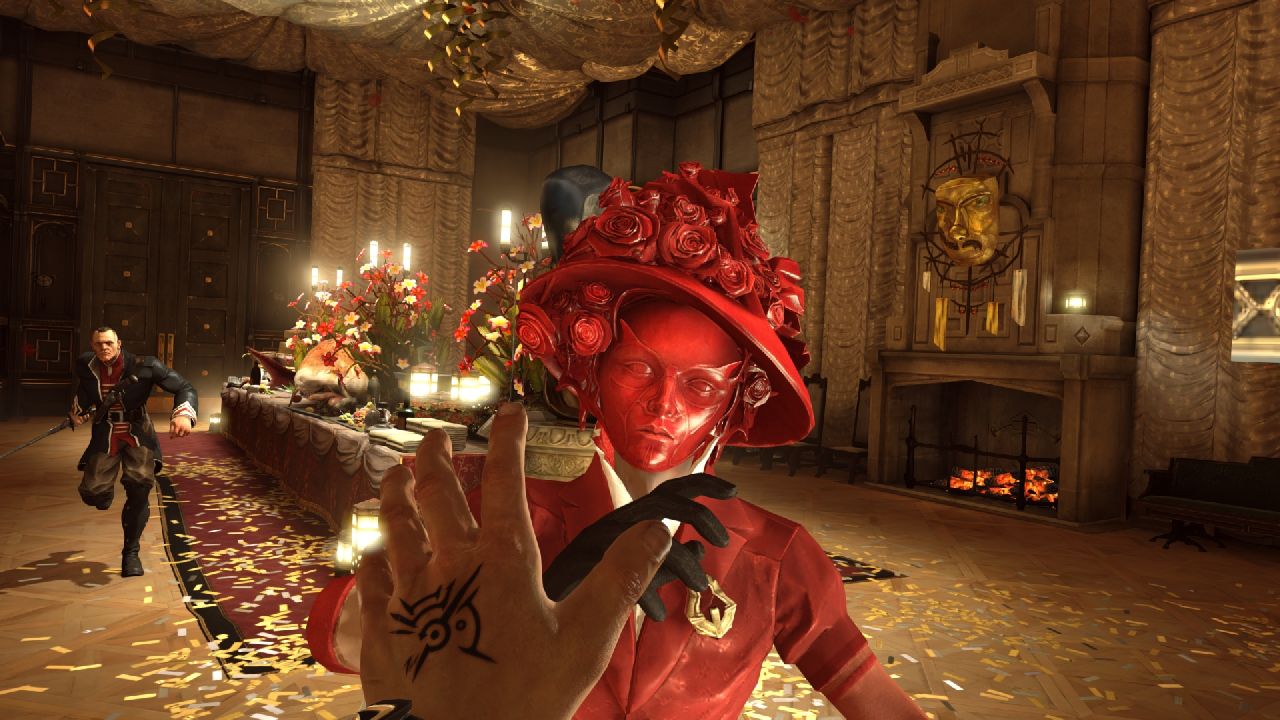 Each action you do in the city of Dunwall has its consequences. The game has a ‘Chaos system’, where the amount of people you kill proportionately increases the amount of rats found in the streets. You must be like, “Rats, eh? What’s the big deal? How’s this even relevant?”

Oh but is. These rats, you see, when found in groups can chomp down on a human and make a mincemeat out of him in seconds. They are hungry, they are baying for blood, and they are looking for you. Don’t go too close to these little vermin, or you may find yourself reloading the previous save. The developers want you to play stealthily, explore other options, study the beautiful environments they have so lovingly rendered.

It’s easy to have a blood for blood philosophy as you destroy your enemies with the sheer rage built up in your heart seeing the Empress pass away in front of you. It’s not necessarily the right way, though. Your powers are given by a mysterious deity called Outsider. Let’s just call it the tools of trade.

The heart shows you the way

There are plenty of things to do in Dishonored. Your powers can be upgraded by finding runes–artifacts of immense power that allow you to enhance your abilities. The deity gives you this heart which tells you what type of a 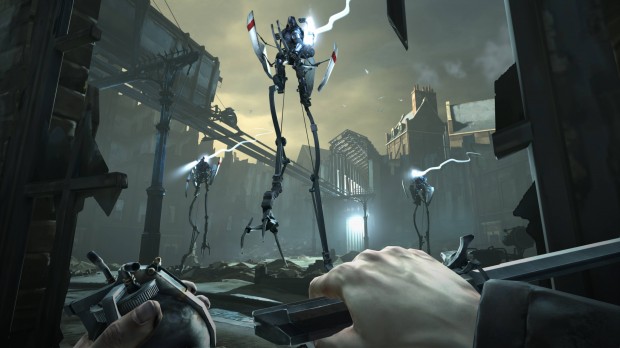 person someone is, and also shows you the way to these runes. These are collectibles that you have to find before the mission ends, and counts toward your tally in the end. These runes are placed in hard to reach locations, obviously; what did you think?

Overall, it’s something I felt was pretty unsatisfying and I just wanted to do the main mission. Seeing the severed heart in your left hand is quite a nasty sight, but hey, got to find those runes, right? The level design can be pretty tricky but it’s also a testament to the effort put by the developers in creating this game. The mission called Kaldwin’s Bridge should be shown to all novice game designers, in order to give them inspiration by learning from the best.

However, there are inconsistencies here and there, and not all levels are created with equal attention. There are 9 missions in total, and let me get one thing very clear. You must not speed run this game killing everything in your way. It’s simply pointless and won’t offer you any satisfaction. It took me 25 hours to finish the game, playing stealthily, with 5 hours spent on the first mission itself. You can finish the game under 10 hours too, but why would you do that, really?

Sight of the Overseer

Dishonored is a magnificent looking game. In fact, you can max out the visuals and still get a silky smooth 60 fps on the PC. The game is optimized very well. It’s not a technical masterpiece, though; with poor textures sticking out like a sore thumb, but you know what the interesting thing is? The art design totally nullifies all this, and what you will see is a concept art in motion. It looks that good on the PC. 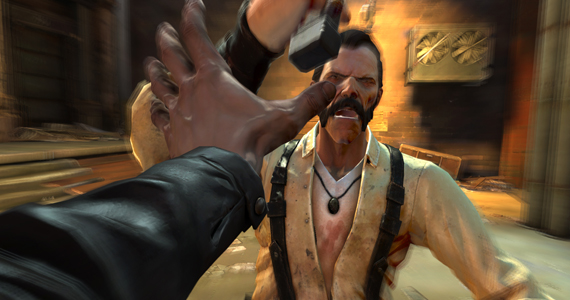 I’m not really sure if the gaming community will unleash some amazing mods for the game, but what we have here by default is something truly stunning. I was, however, displeased with the fact that there is not a lot of variety in the environments, sometimes you visit some places twice. It’s not a bad thing, but considering it’s purely a single player only game, it would have been nice to get more missions or locations in the final build.

I am not complaining though. I am an advocate of innovation. I love new IPs, I love creativity, and I love Dishonored. Now, is it a complete value for your money? That is… a tricky question. It depends on your tastes. If you’re the type that demands an incredible amount of content, you won’t find that here. What you will find is a game that is created with love and affection, oozing with creativity.

I feel that the powers that are available to you in the game sort of hampered it as well. For example, I feel that Blink was completely unnecessary and just made navigation too easy. I would have loved the slow pacing like the Thief games. I am not saying it’s a negative thing, but as you keep playing the game using or abusing Blink, you sort of in a way lose some enjoyment since repetition kicks in. Of course, this could be just me, but Blink should not have been in the game.

Dishonored is a plot-driven game offering you a lot of freedom to do things in a way you want. Not only does it look stunning but plays well, too. People sometimes say “Beauty with no brains” to describe a shallow thing. That wouldn’t apply to this game, though. It has both.

Great art and level design. Choice to tackle missions as you want. Innovative gameplay mechanics. Lot of side things to do in each mission. Stealth mechanics are great. AI is decent.

The powers are sometimes detrimental to the game. The game lacks significant content but isn't necessarily a negative thing. Poor textures.

Final Verdict:
EDITOR’S CHOICE
Dishonored is a plot-driven game offering you a lot of freedom to do things in a way you want. Not only does it look stunning but plays well, too. People sometimes say "Beauty with no brains" to describe a shallow thing. That wouldn't apply to this game, though. It has both.
A copy of this game was provided by Developer/Publisher/Distributor/PR Agency for review purposes. Click here to know more about our Reviews Policy.