Mike Laidlaw from Bioware speaks to GamingBolt about the upcoming role playing game.

We were able to discuss a wide range of the game’s new features such as the world’s size, weapon and armor customization, the new consoles and more. Check out Laidlaw’s response below.

"Putting it on all 5 platforms, which was a fundamental decision from day one, and being able to retain our focus on that has really worked for Dragon Age which makes it kind of unique and stand out."

Leonid Melikhov: Tell us from a top level what has changed in Inquisition? How is it different from Dragon Age 2 and yet has the same feel and vibe as Dragon Age Origins?

Mike Laidlaw: Well, that’s a good question. There are really two big things that have shifted. We’re really trying to do “best of” for the Dragon Age feeling, because we talked about this as making it the defining Dragon Age experience. That means pulling in the tactical camera from Origins which was only good on PC.

Putting it on all 5 platforms, which was a fundamental decision from day one, and being able to retain our focus on that has really worked for Dragon Age which makes it kind of unique and stand out. Focusing on the party, party dynamics and interaction, both when you’re engaging in dialogue and when you engage in combat. You’ve got four characters direct under control the way you go.

Those are the things that I think are really critical to keeping it feeling it like Dragon Age, but our opportunity was when we moved to Frostbite, the new engine. It was like “oh wow, we need to retool a lot of stuff” but it was an engine that was used to make jet fighters fight over the top of tanks, fight over top of guys and we were like “well we could do big spaces right?” We could actually go back to exploration and in Origins I think we wanted that feeling but the engine could never quite match it.

With Inquisition, we’re letting you set a few of your own objectives to pursue your own goals and basically be able to crest the bridge and go “hey, what’s that thing down there? I wanna find out..” and that sense of discovery is just so much better.

Mike Laidlaw: It really is, I think for us and for players.

Leonid Melikhov: How big is the world when compared to Dragon Age Origins and 2? Is it bigger than the two combined?

Mike Laidlaw: You can take the whole of Dragon Age Origins and the level we are demonstrating today and it will fit, all of it. The game is a multi-regional open world, it’s not like one big space. But if you travel you will come across places which are full of demons or may be a desert. They all have a distinct feel. So yes, if you can fit one game in one of the levels, we can fit of two of them with no problem in Inquisition. 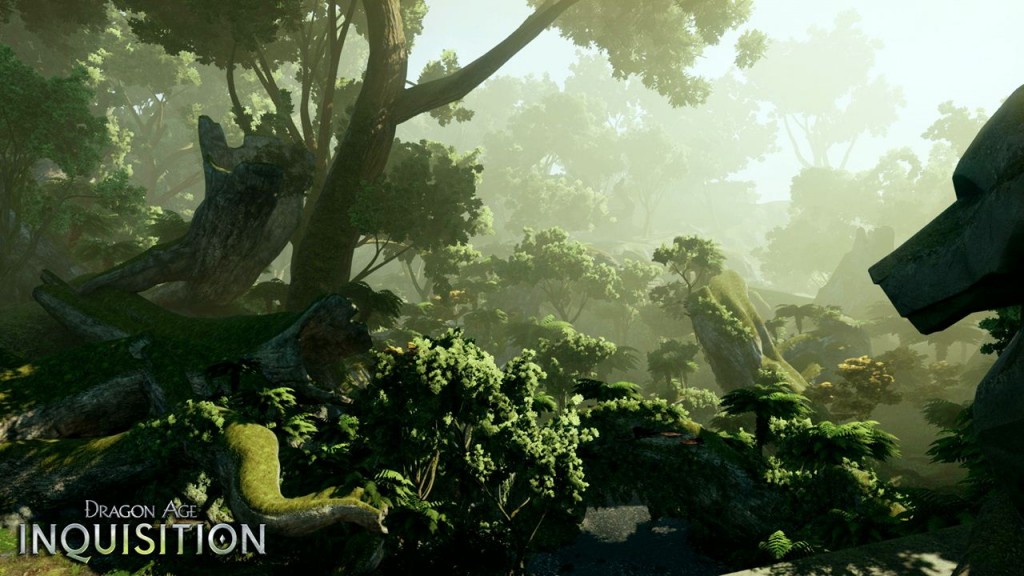 "There is some value to the "go there quest" because it usually pushes you into a new section of the map. You don't want that to be all you doing, that gets very boring very fast."

Leonid Melikhov: Let us talk about the side quests. How are you making sure that those are intriguing and won’t have the general ‘go there and fetch that’ kind of thing?

Mike Laidlaw: There is some value to the “go there quest” because it usually pushes you into a new section of the map. You don’t want that to be all you doing, that gets very boring very fast. A lot of the work we’ve done is to try and move away from “explicit” quests and instead talk about how there are opportunities. Over the course of the game we built up the awareness of “oh hey! I would get more power for my Inquisition if I establish a new camp or close raid rifts” and we did and that’s where we say “that’s where the camps and raid rifts!” Instead of explicit shallow questing we say hey “here is the stuff you could do, let us know what order you wanna pursue them in”

Leonid Melikhov: Are you guys targeting 1080p/60 fps on the PS4 and Xbox One?

Mike Laidlaw: Actually, I don’t know what the target is for sure. The tech guys are still hammering that, we’ll get details out before launch.

Leonid Melikhov: Tell us about the PC version, what kind of graphical options will it have?

Mike Laidlaw: I am not sure what the final list is going to be. But I know with certainty that we will be taking advantage of the hardware, obviously supporting all the features of DirectX 11. The other biggy for the PC players is we’ve added the option for you to plug-in a controller and play with that which changes your user interface entirely to match the consoles. 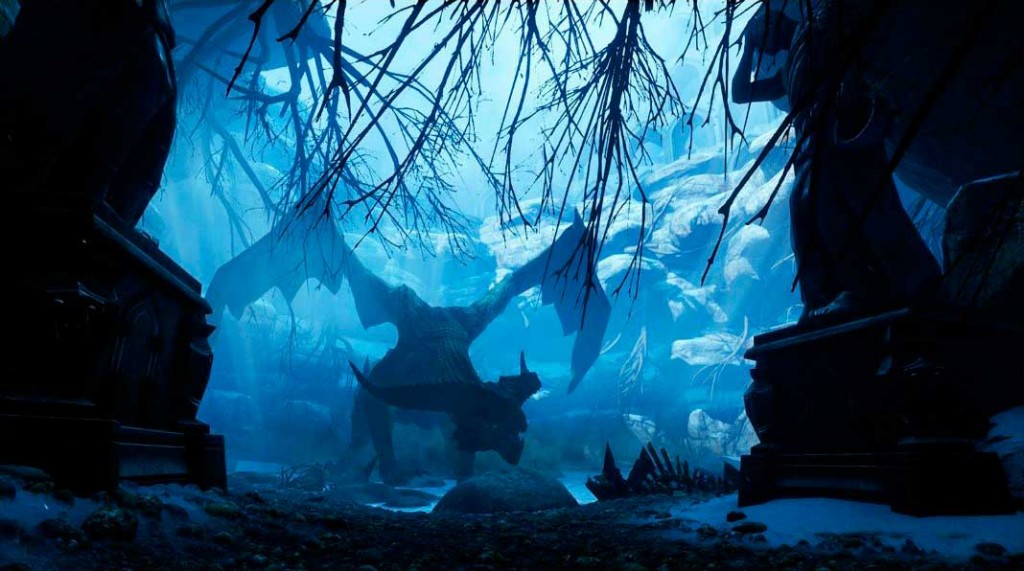 "Inquisition has crafting for weapons and armor which we've never done before. It's kind of a material based system, so if you find iron you're going to be able to make a sword. If you find silver-rite you're gonna be able to make a much nicer sword and it will do more damage and so on."

Leonid Melikhov: Can you tell us about the skill-trees? What kind of abilities will the players have at their hand?

Mike Laidlaw: There is a wide range of them. When you add together all the upgrades, all the abilities, all the passives and everything you put towards your combat to make it all better there is an excessive of 200. The player will be able to purchase them, actives of course can be mapped so people can use them and other ones that permanently take less damage from arrows from the front are passive.

And of course, they do divide by class, so your Warriors have a different tree from the Rogues, different trees for the Mages. In addition to that, there are specializations as well. We’ve actually doubled-down on it being “special” because you have one now and you have too choose. The specializations are more robust than they’ve been in the past, they offer few more talents and really kind of push your character in a different direction than they would otherwise.

We’ve talked about some options such as the Assassins who’s a classic damage dealer, big hits, single target kind of vibe for the Rogue, great with an Archer and works well with daggers too. Then the Articifer is more of a trap-master, he is the guy who sneaks up and knows that everyone’s doomed as soon as they start walking to his direction. Letting you feel like there is a distinct play-style that you can adopt and say “oh ok, cool. This is how I am gonna pursue my class and my character and build my party.” I think is really intriguing.

Leonid Melikhov: Can you tell us about gear and weapon customization?

Mike Laidlaw: Inquisition has crafting for weapons and armor which we’ve never done before. It’s kind of a material based system, so if you find iron you’re going to be able to make a sword. If you find silver-rite you’re gonna be able to make a much nicer sword and it will do more damage and so on.

Ultimately, this system is based around patterns and schematics. This sword takes some metal and you have a selection of metals and obviously you may want to use the best one, but you might have some that are comparable and say “oh no, I want the one that does extra damage to demons, etc..etc..”

So, you’re making choices, you’re trying to be kind of tactical with how you use it and you might have limited resources because you haven’t gone out and found any. When you make your own blade, I want you to feel like you built to your spec, but you can have the appearance you want. 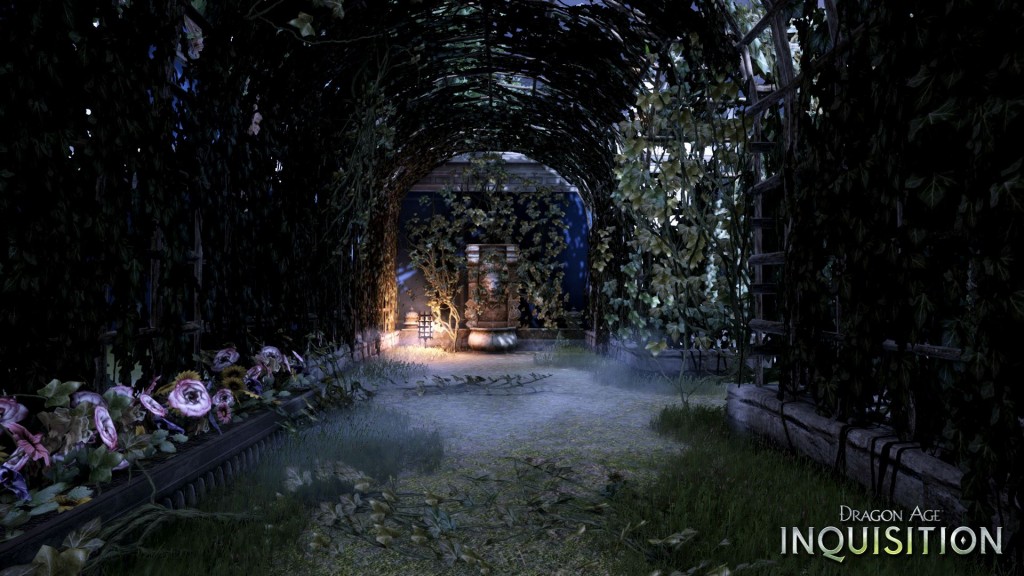 "They key is to not have a cap. When you arbitrary just stop getting experience, it honestly kind of sucks in my opinion. The way experience is granted in Inquistion is as you tackle monsters and going after things and as they get too low level for you they stop granting you experience."

Leonid Melikhov: What is the maximum level cap in Inquisition? If the player does reach that cap, how are you making sure that he or she is still invested in the world?

Mike Laidlaw: They key is to not have a cap. When you arbitrary just stop getting experience, it honestly kind of sucks in my opinion. The way experience is granted in Inquistion is as you tackle monsters and going after things and as they get too low level for you they stop granting you experience. This is a fairly standard RPG mechanic and by the time you’re capped out and no longer gaining experience, you’ve killed some of the toughest stuff in the world.

You’re probably done with the game because you’ve killed almost everything, so that’s kind of our approach. It’s more of a soft-cap and there will be a point at which you stop leveling up somewhere.

Leonid Melikhov: Roughly speaking, how many hours of gameplay are we looking at in Inquisiton?

Mike Laidlaw: It’s borderline impossible to tell at this point, it’s a lot. We built it basically to say “here is a bunch of content, you do not have to do it all of it by any means to finish the story, but you may want too.” So, we want players to feel like they kind of have their unique experience and to do that you need to spread things out say “look, you may pursue this, you may pursue that.”

Mike Laidlaw: Yep. We don’t want you to be going literally everywhere all the time. But it’s not a very restrictive lock, it’s more of about you having to earn the right to go to hidden places and part of that is playing the game. We’ll let player discover how that flows.