Dragon Age: Origins is bound to go down in history as a classic of the RPG genre. BioWare, the developer of Baldur’s Gate and Knights of the Old Republic fame, has made magic again, this time in a more medieval setting.

Taking on the role of a Grey Warden, one of a small group of elite fighting men, you travel the fictional world of Ferelden where a blight of Darkspawn has gripped the land. The Darkspawn are demonic creatures who rise up and are attempting to wipe out the good people of Ferelden. This might sound a little cliché, and truth be told it is. However, the overarching plot isn’t where the magic of the game lies. The beauty of Dragon Age settles with the various characters and the ways you can interact with them. 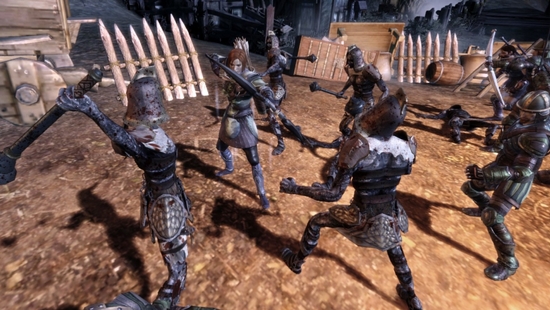 You will often fight multiple enemies at once.

The voice acting here is top notch, and this really helps to create a sense of immersion and realism. When your party members are injured, you feel their pain (or the pain of having to load up a previous save game- the lines are a little blurred) and you want them to succeed. The characters go above and beyond a simple clump of pixels you take from one scenario to the next.

When you start a new game, you are given the option to completely customise your character; from face to hair to specialities to background, your character is unique. Even better, this adds a huge amount of longevity to the game, as playing with a mage is a completely different experience to playing with a warrior.There are three main classes available to you; warrior, rogue or mage. The warrior is the tank of your party; they trade blows, delivering lots of big hits while staying steady on their feet. The rogue is a crafty one; specialising in making traps and poisons, the rogue is not a great front line soldier, but can backstab enemies and pull off gory special moves once behind enemies. The mage is a terrible melee fighter, but is crucial to your party. Mages can heal your party members, enchant weapons, shapeshift and provide covering fire for your team from afar. The most fun parts in the game will often be had with a mage, as there are all kinds of secret spell combos you can unleash for maximum potential.

The presentation of the game is superb, and the HUD makes the characters easy to control. While the camera movement might take a little getting used to, once you master it, making your way between different areas of combat becomes a synch. This is important, because the game is hard. Very hard. So hard in fact, that your poor old space bar might get a bit knackered from overuse, as pausing the game is essential. While its console counterparts require no such vehement enthusiasm on stabbing the keyboard as the PC version, if you are playing this game with a mouse then you will need to pause often to survey the battle and dish out commands to your party. Picking your targets is another essential part of Dragon Age, as there is little point going after the grunts if they surrender once you kill the Alpha enemy. 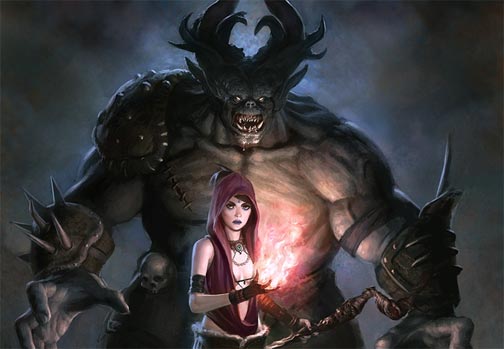 This game will suck you in instantly.

The sound in the game is another part that takes it above and beyond many bog standard games out there. Your group will tell you what’s happening to them in battle, they will exchange the occasional witty banter and of course, the sound of a Darkspawn head thudding on the floor is one to cherish.

The graphics in the game are extremely well done. There are very few graphical hitches, and the game ran at a steady 60 FPS on a HD4850, so no problems there. The blood may be seen as a little distastefully excessive, but for a blood thirsty gamer like myself it posed no issue. The game graphically speaking is sharp, even when zoomed in (which you will want to do occasionally to get a closer look at the action).

All in all, Dragon Age: Origins is an incredible game that reeks of high production values. It is another fantastic game to come out of BioWare, successfully fusing combat and RPG with storytelling and great voice acting. While the game is almost good enough to buy just due to the incredible story, any PC gamer even remotely interested in the genre should pick this one up.

Occasionally slows its pace, cutscenes can be overly lengthy

Final Verdict:
EDITOR’S CHOICE
Dragon Age is yet another incredible game to come out of the labs at BioWare, successfully merging gripping role playing, brutal action and incredible storytelling in one beautiful package.
A copy of this game was provided by Developer/Publisher/Distributor/PR Agency for review purposes. Click here to know more about our Reviews Policy.