Dragon Quest IX marks the second title of the Dragon quest series to be released in Europe. I’m certainly glad the games have finally made it to my home-land, but there’s no doubt that the series has yet to make the impact over here that it holds in its native country. This is where DQIX doesn’t translate well in that, whilst it’s notable for being the first canon Dragon Quest to be released on a hand-held, it’s also the first game in the series to have a very strong multiplayer focus. The whole game can be played in co-op, and as fun as this feature might be, the likelihood of you just happening to know multiple people with their own copy of the game is minimal. The sad lack of an online mode makes it even harder to enjoy this feature. It’s with this in mind that I set out to review DQIX as a single-player experience, as this is what Dragon Quest has always been about in the past and this is how many of you will be experiencing the game. 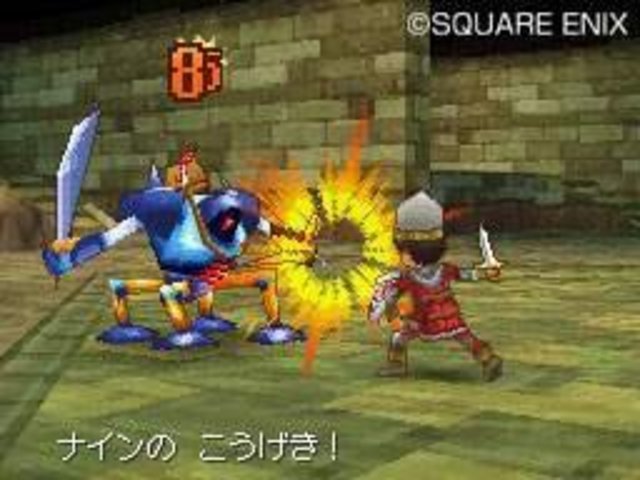 The picture is a little grainy, so you’ll have to take my word for it. The graphics are actually really good.

Most RPGs are bound together by their narrative and plot, but with Dragon Quest this hasn’t always been the priority. More on the plot will be revealed later, but the main attraction I’ve always found in the DQ series has been in its undeniable charm that is usually the result of the presentation. The usually high quality of visuals in the series has been upheld in this latest instalment, and even though it can’t compete with some of its console brethren, the graphics are simply phenomenal for a hand-held title. Everything from the full 3D environments, to the added visual flair in the character customization elements, show that series has taken a few steps forward. Unfortunately at the same time it has taken a step back as well. The visuals are great for a DS title, but I was constantly wondering as I played what the visuals may have been like if Dragon Quest had stayed on the home consoles and received an inevitable PS3 release. I understand it was necessary for the series to attempt to re-invent itself, but I feel a real treat for the eyes has been missed because of this. Technical alterations aside it’s nice to see that the characters are as well realised as always. Akira Toriyama of Dragon Ball fame has returned as character designer once more and his unique visual styling really gives the game a big boost.

The aural side of the presentation also retains the quality the series is known for. A lot of familiar melodies from previous games are well mixed in with new pieces and arrangements to create an engaging musical score that always sets the mood for the quest ahead. It’s just a shame that the direction taken in DQ8 to merge the pieces together and fade them in and out has been dropped, as I found the musical transitions didn’t feel as smooth in Dragon Quest IX. Regardless of a missed opportunity, Dragon Quest is a game that is most certainly pleasing to the eyes and ears.

Now we move on to the elusive plot I spoke of earlier. You play as a silent protagonist who is a member of the Celestrian race, a group of angelic beings (wings, halos and everything) who look after the mortals from afar. A mysterious accident robs your character of some of his angelic powers and he travels the earth attempting to help the people so that he may gain their benevolessence, in the hope that this will restore him to his true Celestrian form once more. It has always been the sense of adventure that has kept me playing Dragon Quest over the years as opposed to a gripping plot, but I must admit I found the story to DQIX was the weakest so far of the series. The overt and rather predictable religious symbolism annoyed me in DQ7 and it has returned here in full force. 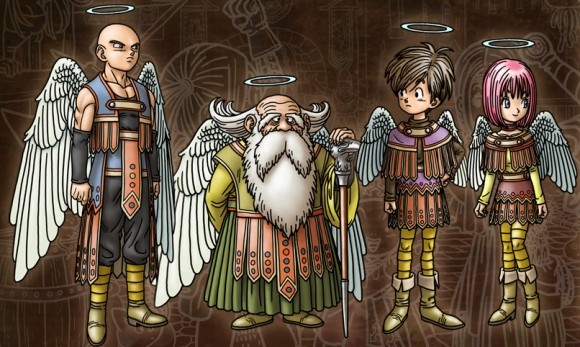 The narrative structure of the Dragon Quest series has also been unbalanced by the multiplayer orientation, resulting in a story very much lacking in personal engagement. The silent protagonist has been a staple of the series since day one, and I actually found this helps the player to project their own personality onto the nameless hero. The only way this works within the narrative structure, however, is if the supporting characters in the party have large and vibrant personalities that can cover for the neutrality of the player’s character. However as the game is designed to be played with a party made up of friends, when you play solo you just create another three silent characters to join your party. Whilst this offers a degree of customization not found in previous iterations in the series, it also makes the plot and character interactions horribly dull and near non-existent in a lot of cases. The pace of the quest also feels much more like a series of small steps rather than the giant adventures you felt you were embarking on in previous Dragon Quest games. Whilst this suits the hand-held hardware the series now finds itself on it also means the epic mood of the previous games has been sadly lost.

Despite my rants of the plot slipping as the series has progressed, this is a game we’re discussing here and not a book, so does it play well? This is where the complaints end, as the answer to this question is a resounding yes! The core gameplay revolves around a combination of inventory and skill management, dungeon exploration and turn-based combat. The combat is what will take up the most amount of time of the three, so it’s a good thing that it is as solid as it has ever been. Not a huge amount has changed over the years with the combat in Dragon Quest, but why fix what isn’t broken? It’s a straight up turn-based affair with no whistles and bells, but the simple to learn, tough to master aspect of it keeps you coming back for more. You kill your enemies, gain your XP and eventually level up, enabling you to learn new skills and abilities. The depth in the system comes through the sheer amount of content and customization on offer. Whilst your class is set to begin with, you soon gain the ability to choose one of six classes for each of your characters, each with their own skill set and unique weapons. Each class also has five skill trees that players can invest skill points earned through levelling into, further allowing a diverse mix of play styles. Don’t even get me started then on the weapons, armour and equipment as well. There’s a huge amount of gear to buy, find and even create once you find the alchemy pot. It really keeps the gameplay from getting stale and gives a constant sense of progression throughout. 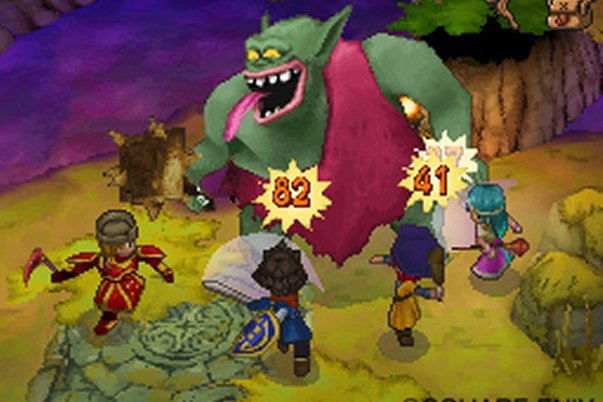 Health points, ogres, what more could you ask for in an RPG?

The item management within the game has to be pretty solid to help the player keep tabs on all the gear they collect over the course of the adventure. Thankfully the user interface is clear and concise. It’s fairly old-school (much like DQIX as a whole), but is simple and effective. In terms of the exploration, it must be said that it pales in comparison to other entries in the Dragon Quest series. There are a huge amount of side-quests that certainly make exploration worthwhile, but the smaller scale levels feel less expansive. The world map is also much smaller in scope and the removal of the monster capturing side-quest made me feel much less inclined to explore all the corners of the globe. It’s truly one of the saddest omissions that this is now lacking, as the pokemon style antics of building up the ultimate monster team was one of my favourite aspects of Dragon Quest 8. Still, I can understand why this is no longer present seeing as how Dragon Quest: Monsters, a spin-off title entirely based upon this mini-game, has been available on DS for some time.

Now we come to discuss how much value you’ll get upon purchasing DQIX. Those of you familiar with the series will understand why it seems odd for me that I need even discuss this point at all. This game is long. Really long, (no Freudian comments please.) Even if you just plough through the main quest as fast as you can there’s at least a good thirty hours required to clear. If you get wrapped up in the inevitable level grinding, item hunting and side-questing, the game could last a metaphorical eternity. If you are one of those lucky people who has friends who have their own DS and copy of the game within sane travelling distance, then the array of multiplayer features will extend the amount of content in DQ9 even further.

It’s on this note about multiplayer that we find ourselves at the main heart of Dragon Quest IX’s success, and inevitable failings as well. Dragon Quest IX is a really good game, but it just isn’t as polished or engaging as its predecessors, especially when played on your own. I do feel for DQIX though, as it champions an ageing genre that is attempting to re-invent itself and stay relevant to the modern audience. Lord knows it has certainly made a better attempt at this than the Final Fantasy series, but I personally think the changes made to the series have diluted the experience to a degree and that a new direction needs to be taken to improve future sequels. I’d highly recommend DQIX to all DS gamers, as there’s nothing quite like it on the system at the moment, but I will point out that it is the weakest link in the series by a long way. Here’s hoping that future instalments will return to the home consoles, where the series’ heart truly lies. If you haven’t played the fantastic eighth game in the series, or the DS remakes of DQ IV and V, I’d recommend you start there first. If you’re looking for a new fix then you won’t go wrong getting DQIX, but it still feels like a missed opportunity in many ways.

Classic turn-based combat, A huge amount of weapons, items and skills, Lots of things to see and do, Fantastic graphics, Character design is full of life

Multiplayer focus results in a weaker plot. Support characters are player generated and lack personality. The adventure lacks scope in comparison to previous games in the series

Final Verdict:
SUPERB
Putting the “J” back in JRPG Dragon Quest returns with an all new instalment exclusively on DS, but has the new multiplayer focus made the game less appealing to the single-player audience?
A copy of this game was provided by Developer/Publisher/Distributor/PR Agency for review purposes. Click here to know more about our Reviews Policy.