Dynasty Warriors 9 Review – Army of One

Take on hordes of battalions to win back peace.

For most of the Dynasty Warriors series’ lifespan, Omega Force, longtime developers of the franchise, have set their goals for this hack and slash series pretty high, but the results have always been mixed. With Dynasty Warriors 9, Omega Force have overhauled the series with some interesting features along the way. But do these new features add up to a whole new experience, maybe one that can finally reach that illusive goal of greatness? Let’s find out.

Dynasty Warriors 9 is a third-person hack and slash, one versus 1,000 gameplay style series, where you’ll take on hordes of enemies as you try to bring peace back to the land. The story is massive and is spread out in over 10 chapters. The sprawling world of China has been invaded by several armies. Each of which is controlled by their leader who wants to take over China one way or another. So it’s up to you to destroy the many armies and bring peace back to your people.

The land of China in Dynasty Warriors 9 is huge. For the first time in the series’ history, the world is a single map that allows you to go off and do almost anything at any time. The dynamic story is based around your character’s actions, as well. What you choose to do will effect the story and change the outcome of many moments throughout the game. You do have the ability to choose which side missions you want to accomplish, which armies and battalions you want to defeat, or go all in and defeat the chapter’s boss right away. Critical missions are spread throughout the land and which you choose expands on the story even further. Listening to the story is a bit mind-numbing, however, as the talking and reading goes on and on, and the gameplay doesn’t express the story well enough. Language for the time the game takes place (around the first-= century), is out of place and many times cringe-inducing, especially when it comes from voice-overs that almost sounds like cartoon characters. Luckily, the story isn’t the key to experiencing the frantic gameplay. 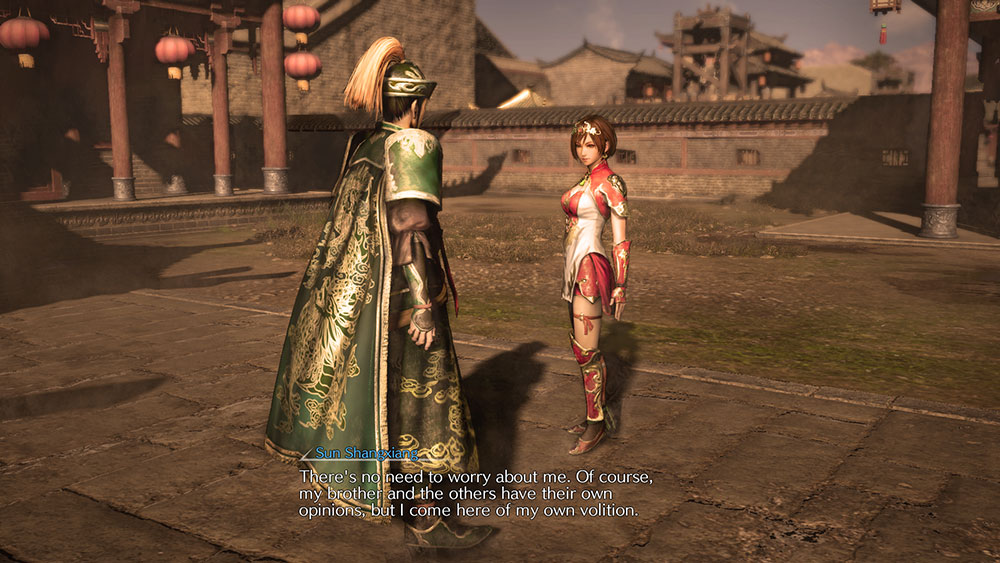 "Listening to the story is bit mind-numbing, however, as the talking and reading goes on and on, and the gameplay doesn’t express the story enough."

Missions are based around strategy. You have the option to go in and attack head-on, sneak in and take on the hordes of oppressors, or even use night time as an advantage. I found that exploring the vast land until night approached was my best strategy. Enemies throughout the game are indicated by red and your team of warriors that help in the battles are marked as blue. These colors of red and blue are called influence, and they determine how much control you need to take back to change the tides of battle. As you progress, you’ll get the ability to upgrade you and your officers. Abilities include attack, speed, health, and many more.

As is the case with this franchise, you’ll encounter groups of 30 or more enemies on the screen with several other groups waiting in the backdrop. With the advanced combo system, which is new to Dynasty Warriors 9, taking down these battalions is as easy as a few button clicks. Each group of enemies have a few different battalion leaders in the form of a general, captain, etc. The key isn’t always to try and take down the entire group, as more of them keeping on coming, but rather defeat the leaders first and then move onto the next series of enemies. Like all the other Dynasty Warrior games, the enemies are mindless most of the time. I had to change the difficulty to hard just to make the experience a bit challenging. However, as you approach the boss of each chapter, the game’s difficulty tremendously spikes. Boss fights becomes less hack and slash and more strategic. 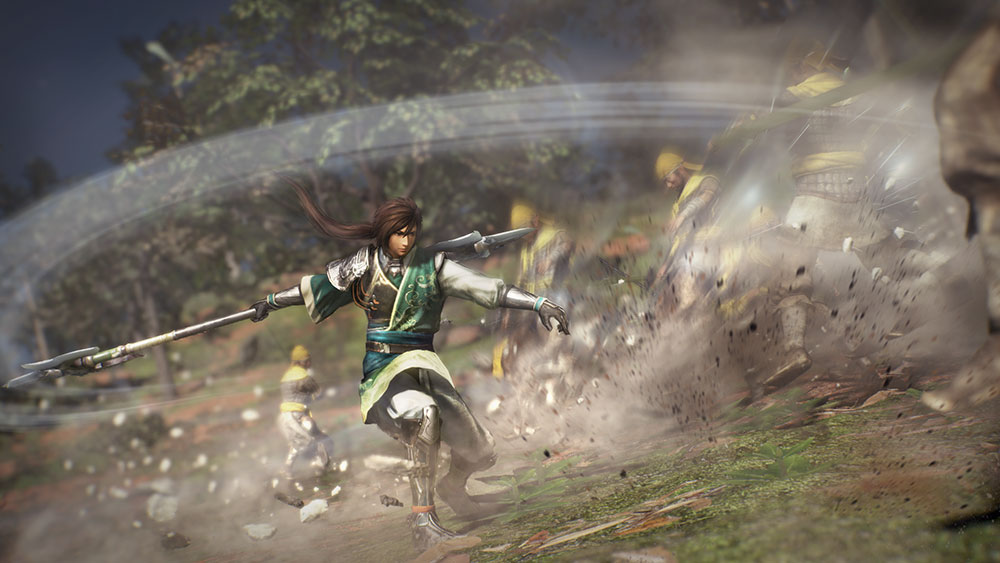 "One of the most bothersome aspects of Dynasty Warriors 9 is the inconsistent frame rate. Its choppy refresh rate makes the game feel stunted and it almost never ran smoothly throughout my experience."

When enemies do attack or you finally get to a boss, the combo system is key to winning. The main-face-buttons are the usual ones for taking on the waves of enemies by mashing them all in different orders. Continually hitting Square on the PS4 will gain you massive combo hits, and finishing it off with a follow up attack almost guarantees an instant death. Boss fights are a little more complex. Using a combo system isn’t good enough for most boss battles. You’ll be using a series of items to defeat them. I found exploding jars to be a great help, and they can be found almost everywhere as you make your way around the world. Bosses also have special abilities but the player’s elemental powers help keep you on your toes so you aren’t just hacking and slashing, but rather dodging around from spot to spot.

Weapons within the game are very interactive and can be somewhat customized. You can purchase weapons from a blacksmith or collect materials scattered throughout the land, and upgrade them or use the Re-forge system by attaching gems that change the powers of the weapons to a variety of degree. Each added gem randomizes what powers each weapon gets making the customization of weapons a rather interesting mechanic.

One of the most bothersome aspects of Dynasty Warriors 9 is the inconsistent frame rate. Its choppy refresh rate makes the game feel stunted and it almost never ran smoothly throughout my experience. The camera is also a major problem throughout. I found myself sometimes flying in the air in the middle of a combo, with an on screen button command I could not see because it was out of the camera’s view. It would have helped if there was an auto-camera feature during battles that allowed the entire fight to be captured instead of leaving it up to me and my only two thumbs. 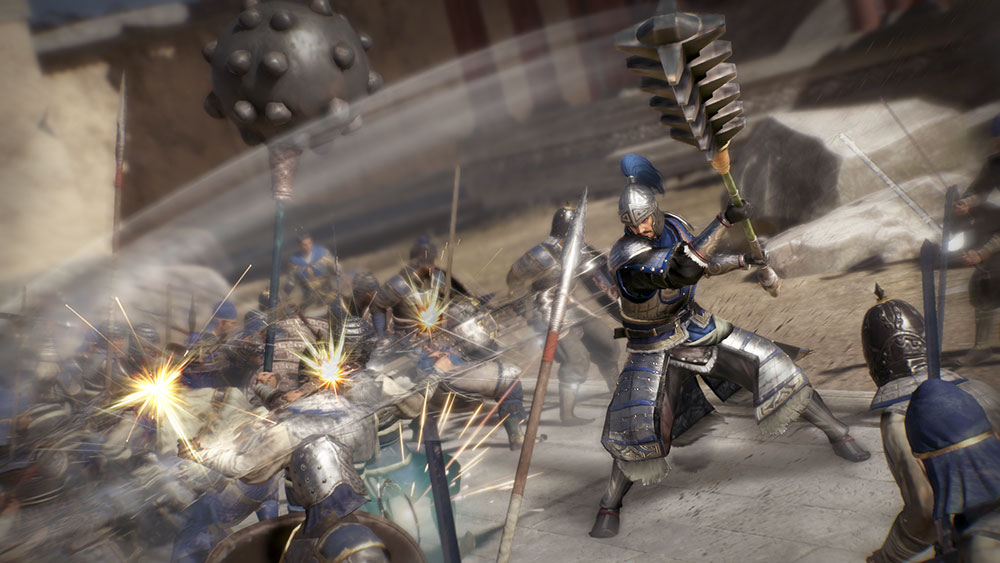 "The graphics and textures feel like the game is running on the PS3."

The in-game world is okay for the most part but there isn’t much to do there. Sure, the land has opened up and you can go just about anywhere, but you won’t find much on your way. I found myself using fast travel methods after a few hours once I realized there wasn’t much to see by way of exploration. The graphics and textures feel like the game is running on the PS3. You won’t find Dynasty Warriors 9 to be a beautiful game, but it has its own beautiful moments through the on-screen action from time to time.

Overall, even with the improvements bought by an overhauled combo system and the introduction of an open-world, the game is still largely the same as previous entries. It’s not particularly engrossing, and it feels as though it only wants long-time fans to play it. If you didn’t love the franchise from the beginning, you won’t find much here to love, either. It’s fun if you want to just button mash all day in pure Dynasty Warriors style, but other than that, the somewhat empty world, bad camera and framerate, make this new entry rather mediocre.

Framerate can be choppy, camera is bad at times, cringeworthy voice-overs, open world is bland with not much to do.

Final Verdict:
FAIR
One can't help but feel that Dynasty Warriors 9 had a lot of potential. With more time in the oven it could have been a better game than it's now.
A copy of this game was provided by Developer/Publisher/Distributor/PR Agency for review purposes. Click here to know more about our Reviews Policy.