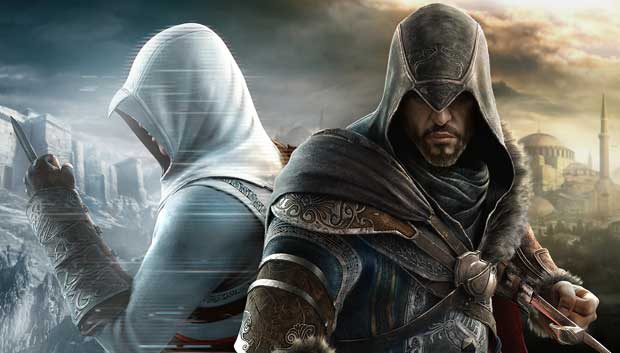 We were able to preview a level from Assassin’s Creed: Revelations which looked great.  The game has really amped it up with all the different bombs you can make and then use, like one particular looked just like a frag grenade once used.  Of course the smoke bombs have returned and there will be many, many other types once the game is released on November 15th, but I was unable to get an exact amount of how many different bombs will be available.  Another huge new aspect of the game is your hook-blade, which is primarily used for zip lines but can also be used for combat.  This does tend to speed up the game a little as throughout the demo there were zip lines everywhere.

From the Assassin’s Dens to your personally trained assassin’s, Ubisoft will be upping the ante for both, giving you a new way to send out your assassin’s on missions, which they have yet to reveal the specifics.  Altair is will be playable in the game, so when asked about Altair’s role, the Lead Designer had stated that you play several sequences as him and relive key moments in the life of Altair.  I mentioned if he could talk a little bit about Desmond and what can we expect when we are in his shoes but he could not go into details, leaving it at while playing as Desmond will be really interesting as well as innovative.

The Lead Designer stated that one of the elements they wanted to change was to take Ezio’s free running to the next level, with having him climb faster and adding the zip line element into the game, so as previously mentioned will make the game a much faster paced Assassin’s Creed.  He did not know much about the new mocam technology that was used during the development of Revelations but did say that this is the best looking Assassin’s Creed game from the gameplay to the cut scenes, which he emphasized on.  There is also a new eagle sense you have in the game which is an enhanced version of the one in previous games letting you see different enemy conditions, among other things.  I had asked if he though it was over powering at all and he responded by saying that along with the enhanced eagle vision, Ubisoft has given the player more challenges to deal with, balancing the new eagle vision out.  I did not get to get a look at the games multiplayer but there will be changes to that as well, including more character customization.