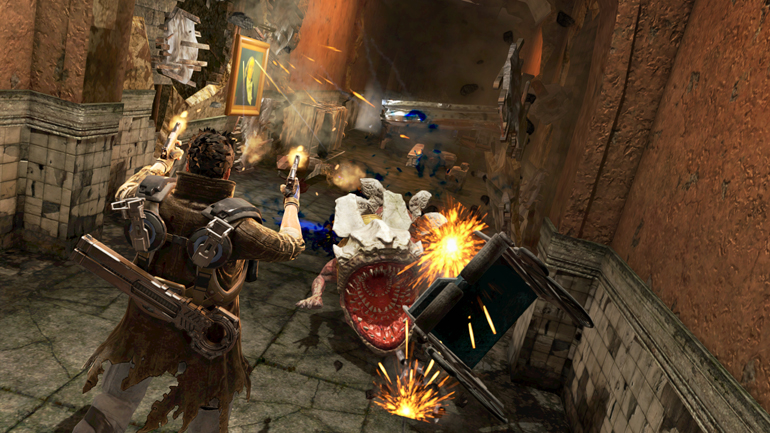 Neverdead is a third person shooter/action game with you taking on the role of the immortal character Bryce.  Bryce has a back story that goes back five hundred years when he was demon hunting with his wife.  After attempting to kill the demon king those many years ago Bryce failed, had lost his wife in the process while the demon king made him immortal by implanting an evil eye in place of his right one.  Now in despair after everything he lost, he still works as a demon hunter for a secret government agency with a partner.  This is where it gets hilarious; being that he is immortal his limbs can be dismembered with no issues as long as he retrieves them.  You will even come to certain scenarios where you might have to throw your head on top of building to complete a puzzle as your limbs or head especially can be controlled independently.

You can use your head to get to places you could not take you full body to whether it is at a high point you can’t reach or simply a small hole your full body cannot fit in.  Bryce also has the ability in certain cases to regenerate his limbs otherwise you can just roll over your dismembered limb to have to reattached.  If your partner dies, it is game over and that is how some balance has been implemented into a game where you can never die.  Neverdead also has destructible environments that can used in different situations one being to maybe take out a platform enemies are stationed on, among others.  You will gain XP points throughout the game that you can upgrade many different abilities with.  For instance you can use those XP points on upgrading, according to your style of gameplay whether that is gun play, sword play or using some of the immortal powers that you will gain over the course of the game.  There will of course be boss battles where you will need to figure out the specific technique to defeat that boss.  After the preview of the game we had a short Q&A session that was unfortunately cut short.

Q: What inspired the whole dismemberment aspect?
A: Everybody asks that question. I only try to provide a unique style and am very anxious as well as concerned to see if it is received well by the audience.

Q: Will Bryce and his immortality be a major plot point for the game?
A: Yes, and the plot is also outlined in one the latest trailers for the game (as seen above).

Q: Has the game been influenced by any other media?
A: Yes, a lot of movies have influenced the development of the game. As far of the dismemberment, that is a unique feature that I came up with influences from everywhere.

Q: Is there multiplayer in the game?
A: There will be 4 player co-op and competitive game play.