UFC Undisputed introduced the gaming public to the sporting phenomenon that is mixed martial arts – dubbed the fastest growing sport in the world. With the official UFC title now in its second year, EA has decided to get in on the action too… and wins the fight easily. There may not be some of the big names associated with the sport, such as George St Pierre or Brock Lesnar, but there are still plenty of famous faces from the sport. Dan Henderson, Shinya Aoki, Randy Couture and Fedor Emelianenko are just some from the roster of around 60 fighters. 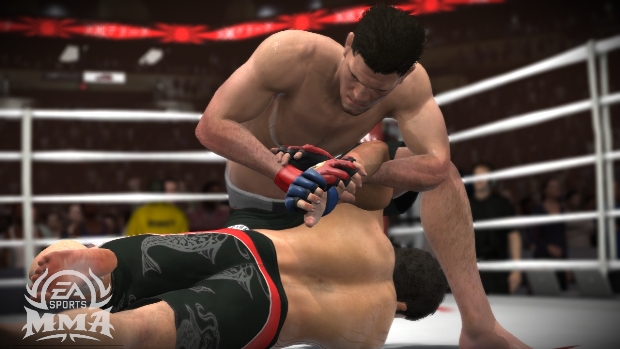 There are plenty of fighters to get to grips with

From the menu screen, there’s the usual option to dive straight into a fight, where you can pick from the huge roster, arena types and rules – including Japanese, Vale Tudo, and Strikeforce. There’s also a quick tutorial or, should you feel a little more confident in your abilities, you can opt for the online multiplayer mode – a superb distraction with good matchmaking and no noticeable lag during bouts. Emerge from a fight victorious and XP is collected, putting you within touching distance of a belt and that all important kudos.

A new Live Broadcast option allows you to have your online fight watched by gamers worldwide. Simply produce a hype video for your fighter, get the attentions of an EA SPORTS promoter and fight for real prizes.

You can also become a promoter yourself and set up a series of bouts with your friends. Customizing fight cards with four fights per card and up to 10 people at once certainly adds to the game’s longevity and is a welcome addition.

But it’s the career mode that really excels. 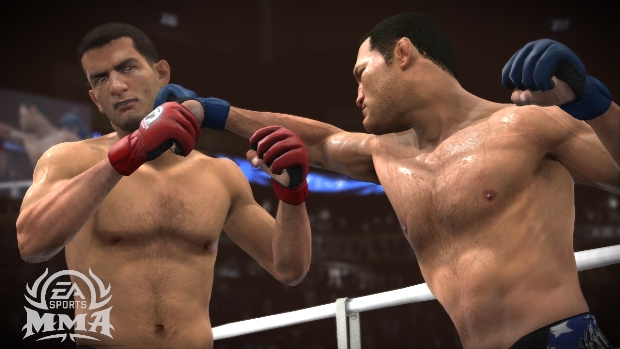 Create a fighter and take him to the top

Create a fighter and customize him to your hearts content – although not as indepth as THQ’s game, there are plenty of options from fighting style, entrance music, victory celebration and all the usual facial feature and hair options.

Learning the basic standup and grappling skills are easy to grasp, with a series of kicks, punches and takedowns explained through various mini games. Unlike the UFC titles, the controls are intuitive and reminiscent of EA’s acclaimed Fight Night series, the buttons responsible for your fighter’s various limbs.

Various gyms around the world allow you to specialise in certain moves or styles from boxing to ju-jitsu. What’s more, there are 16 special move slots available – which can be filled by performing a series of timed exercises. Achieve those and your chosen move is unlocked and added to your repertoire. All your favourites are available, such as the spinning kick, takedowns or the kimura submission. 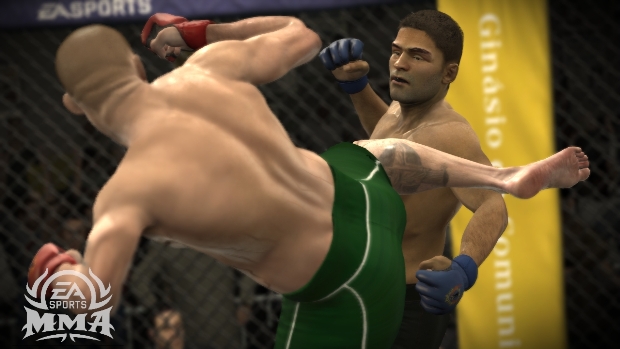 It’s then a case of fighting your way through the various minor leagues to rise through the ranks and chase that sought-after belt. Rematches and titles defences add to the tension, allowing you to try out new tactics against former opponents and further hone your skills.

Button-mashing won’t help you much either as you’ll quickly see your stamina bar deplete, making you more susceptible to strikes and less likely to recover. Instead, a more strategic take on the sport is supported and well-timed button presses and stick gestures will reap rewards.

The tricky topic of submissions have been handled particularly well by the developers and is much better than the UFC series. Chokes require you to move the analog stick until you hit a “sweet spot” that will force your opponent to tap out or pass out. The limb holds, meanwhile, need careful button presses and pacing to prevent your stamina from draining. An X-ray effect on the limb highlights the tension it’s being put under and gives you an idea of how successful you’ll be.

The graphics are great; the fighters look and move accurately and the blood and bruising effects are employed well. Sound-wise, the commentary is decent with a strong voice cast. The resounding thud effects when you land that killer punch or kick are also very good.

EA Sports MMA is an extremely welcome addition to the genre and should certainly not be overlooked. Even gamers who are unaccustomed to the world of mixed martial arts should give this a good playthrough as it’s an extremely rewarding title both on- and offline. The career mode alone is worth the outlay and will definitely keep you coming back for more.

Loads of fighters and plenty of moves to unlock and learn. The ground game and submissions are handled well. Looks and sounds great - and its career mode is absolutely fantastic!

Unlike the rival UFC Undisputed series, there may be few fighters gamers will be familiar with. It lacks some of the sparkle seen in the UFC games too - from customisation to fighters' entry to the ring.

Final Verdict:
SUPERB
EA gets in on the action with its first foray into the world of mixed martial arts. There are few flaws despite it being the first in the series - it's just a fantastic representation of the sport
A copy of this game was provided by Developer/Publisher/Distributor/PR Agency for review purposes. Click here to know more about our Reviews Policy.