Head to head graphics comparison between the PS4 Pro and Xbox One X versions of UFC 3. 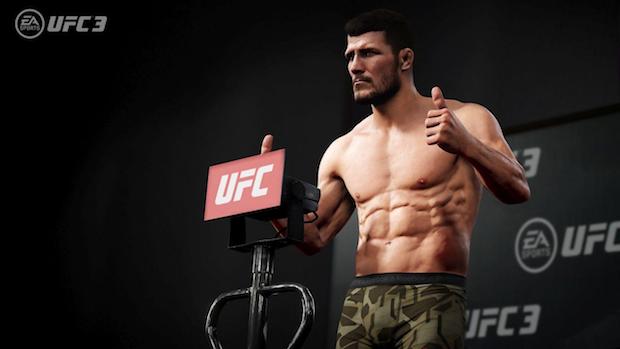 The market is full of exceptional fighers. Mortal Kombat XL, Injustice 2, Dragon Ball FighterZ, Tekken 7, BlazBlue…you name it and the market has it. But in terms of realism, there is nothing that comes close to EA Sports UFC 3. For those who are unware, UFC is a mixed martial arts fighting game that places heavy emphasis on eye-body coordination, and the physics of how two clashing bodies react on the stage.

Buliding on 2016’s EA Sports UFC 2, UFC 3 improves in just about every gameplay mechanic whether it be knockdowns and knockouts, (which by the way look incredibly realistic) or the ground transitions along with fluid and responsive animations. Every blow has its impact which could result into a swollen face, blood getting dropped on stage as the opposing fighter wallops you right in the mouth or a fighter feeling completely exhausted after a long drawn fight. The beautiful thing about all of this is that none of it feels scripted. Every action you do on the fighting stage will result into different effects. Hit your opposing player on any part of the body, that particular spot will be bruised. It all flows nicely into the gameplay and doesn’t seem like a forced injury or artifical in anyway.

As was the case with UFC 2, the presentation in UFC 3 is top notch. There are over 200 fighers in the game and each of them have been modeled accurately right down to the tee. Their respective entries, the background score, the announcer going crazy on the stage and the almost perfect commentary sets the stage for some awesome and bloody fighting on the UFC stage.

And the on-stage action looks even better thanks to the added power of the PS4 Pro and Xbox One X. For starters both versions feature two graphics options. One is the Performance mode that prirotizes better frame rates up to 60fps and secondly, the Resolution mode which allows better image quality on 4K TV sets. Both versions run very close to 4K resolution and in Performance mode we see almost locked frame rates of 60. This is kind of expected given that there isn’t much going in terms of GPU effects like particles, environmental interaction and destruction (seen in games like Tekken 7).

There are also some minor differences in terms of how ambient occlusion is implemented on the Xbox One X. It seems to be more pronounced on Microsoft’s machine. 1080p TV owners can also enjoy supersampling when running the game in Resolution mode making on the screen image quality sharper.

So overall, UFC 3 is a realistic looking game with top notch presentation, fluid animations and complex gameplay. It might very well be 2018’s best fighers, right up there with Dragon Ball FighterZ in terms of skilled fighting and the number of modes it offers. Whether you are playing on the PlayStation 4 Pro or on Xbox One X, you are guaranteed to have a fantastic experience.