Everything you need to know about Earth Defense Force 2025.

Earth Defense Force 2025 (also known as Chikyû Boueigun 4 in Japan) is a third person shooter that was developed by Sandlot (previous Earth Defense Force video games) and published by D3 Publisher (Adventure Time: Hey Ice King! Why’d You Steal Our Garbage) in Japan on July 4th of 2013 for the Xbox 360 and PlayStation 4. It is currently slated to launch in North America on February 18th of 2014 and in Europe on February 21st of 2014. Chronologically it is the sequel title to Earth Defense Force 2017

As with most video games that come from Japan, there is effectively no development details surrounding the game at the moment. These sometimes become available after launch via interviews and/or press release. This Wiki will be updated as and when such details become readily available.

When playing Earth Defense Force 2025, players take control of a EDF (Earth Defense Force) soldier. These soldiers are available to the player in the form of four different classes [Read “Classes” for more information]. Using their soldier and the unique abilities attributed to each of these warriors, the player must engage the enemy in a third person perspective with a myriad of weapons that range from simple shotguns to massive missile launchers and energy weapons.

The player can augment their effectiveness on the battlefield by making use of various vehicles which come in the form of tanks and other armoured vehicles. A staple of the gameplay is making use of destructible environments, sometimes in order to best set up a killzone with a machine gun, it’s best to level a few buildings to clear your line of sight, luckily this wanton destruction of public and private property incurs no penalty for the player. The higher the level of difficulty, the better the player is rewarded, these rewards come in the form of armour enhancements, permanent statistical boosts and seriously powerful weaponry. 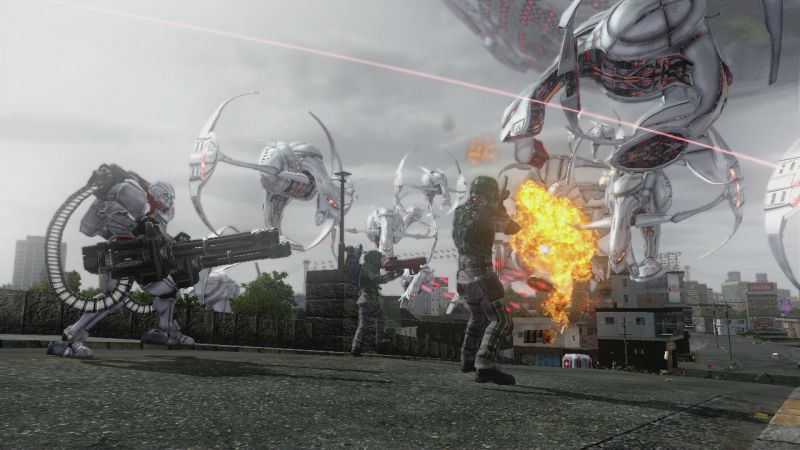 The  Earth Defense Force is a multinational military force of unified nations that is funded by virtually every country capable of doing so, it was founded after the discovery was made that Earth was to be visited by an Alien species. In case these visitors proved hostile, the EDF was conceived to act as a line of defence for humanity. Some time in 2017, a hostile enemy did arrive at earth, attacking with the Ravagers, a giant insectoid army supported by monstrous robots and UFO’s.

After 8 years of bitter conflict, the last of the Ravagers is killed somewhere in Arizona, however the foe attacks again, this time using Retiarius. Arachnid type creatures that makes use of gigantic spider webs and their ability to climb, this time supported by what can only be described as giant bees. Now it’s the year 2025 and the EDF must once again step up to the plate and defend Earth from Alien invaders.

These 4 character classes will also lend some insight into the weapons and equipment made available to the EDF soldiers.

Ranger class: The Ranger is the common foot soldier of the EDF and is versed in the use of vehicles, firearms and mech suits to augment their fighting abilities.

Wing Diver class: This caste of airborne specialists is reserved exclusively for women who make use of high end technology and weapons, they also employ the use of jet packs.

Air Raider class: The Air Raider takes to the field in the role of support, this specialized trooper assists his fellow ground pounders (The Ranger) and airborne allies by deploying various health recovery stations and force shields for added protection. They may also summon vehicles to the battlefield and coordinate air raids over a designated target.

Fencer class: The Fencer is the heavy weapons expert in the EDF, this specialist is capable of holding the line alone with great fire-power. Making use of a man portable energy shield to help against incoming attacks, a Blast-hole Spear that injects high pressure plasma inside anything unlucky enough to be pierced by it. A handheld Gatling gun that (when spun up) will unleash a torrent of fire-power all over the general vicinity in which you point it, accuracy isn’t important when you’re putting this many rounds down range. The Vibro Drive Hammer, a slamming weapon that clears the area of those unlucky enough to be caught in your swing. The AP Hand Cannon, this armour piercing monster slaying weapon will punch a hole through even the toughest armour, but the vicious recoil means you’re going to be left vulnerable for a moment after firing.