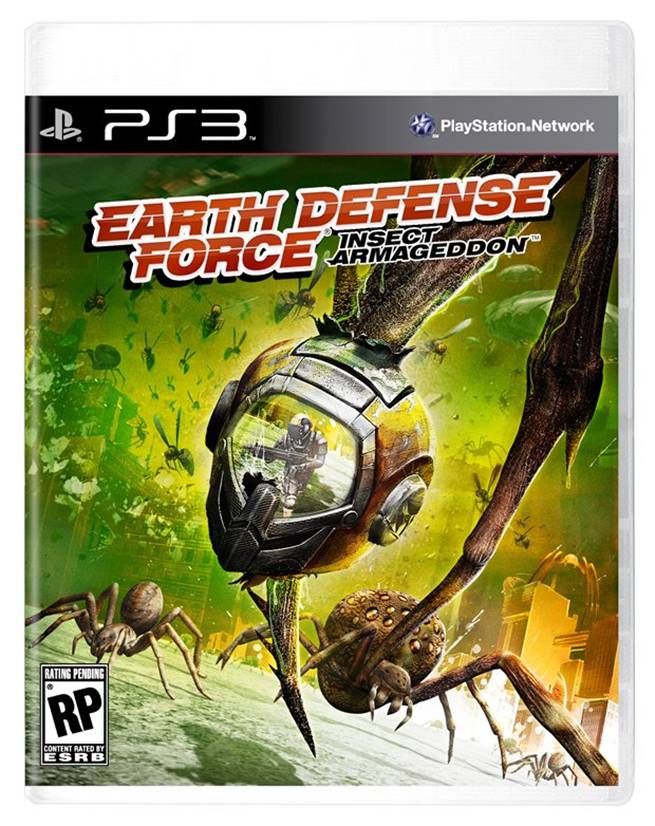 GB: Which of the problems in Earth Defense Force 2017 are you looking to fix first? The visuals of the game were not quite up to the mark, will that change in Insect Armageddon?

Brian: We didn’t really set out to “fix” anything in EDF 2017, especially since we knew the charm of the original game needed to stay intact. Really, what we wanted to do was bump up the feature set to something that is more widely expected for a title here in the States. Looking at the most popular shooters out there, you would be hard pressed to find one without online gameplay, and there’s a good reason for that; people like to play with other people.

GB: Players of 2017 said that it was best when played with friends, but also hated being restricted to couch co-op. This may still arguably the best way to play with your friends, it’s also limiting, so we really wanted to allow people to connect over Xbox Live or PSN to be able to get the same experience. In the end (after some fans poked and prodded), we got the best of both worlds since we now have online and split screen.

Brian: The graphics of 2017 may not have matched other titles on the 360 at the time, but it was a launch title and it had more stuff on the screen than any other title at that time (and maybe still!). With Earth Defense Force: Insect Armageddon we were able to take what had been learned on the 360 since then, combine that with the power of Vicious Engine 2, and get to what we wanted; tons of really good looking bugs and jaw-dropping destruction.

GB: EDF 2017 was a best-selling game, pretty much a surprise hit. A lot of expectations are riding on Insect Armageddon. Do you think you can outdo your previous EDF outing?

Brian: Well, if you’re not trying to outdo yourself, then you probably shouldn’t be trying at all. That kind of reminds me of one of those tough guy shirts that say something like “Go Big or Go Home!”

But yes, I do think we can outdo 2017 because we are bringing everything to the table that fans wanted in the last game. Although the last game performed well for us, it did not get wide-spread popularity outside of the press and fans of the series. I don’t think this is just because it had a whacky B-Movie feel to it (I believe that’s WHY people liked it), my guess is that it just didn’t have the features that people were looking for on the Xbox 360 at the time. Everyone wanted their Live and their 50 Achievements and their online co-op play. Well, now we have all of that, the graphics have been kicked up a notch, and we have even more weapons than before. Basically, it’s all that and then some. 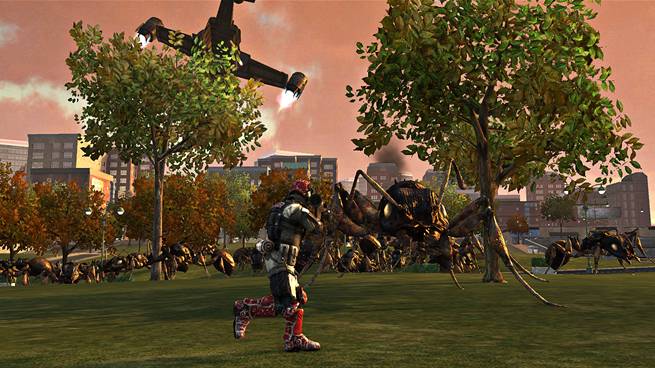 GB: Earth Defense Force 2017 was praised so much because of how fun it was, and because of it’s arcade-style gameplay. Will you be retaining the same style in Insect Armageddon or will you go for a more realistic gameplay structure?

Brian: The gameplay is still arcade-style. Entire buildings come down with a rocket or two. A tiny human with a little assault rifle can mow through an entire column of approaching mecha-ants the size of cars. You don’t have to worry about fallout when a nuke goes off near your player. All of these things are the same. The game is still about holding down the trigger until everything is dead or your finger hurts.

GB: EDF games have been known for featuring a wide range of enemies, weapons and mission types. Will we see more innovation in this new EDF iteration?

Brian: With the enemies, we tried to build on what had been done in the previous EDF games. For example, there was no reason to change the way the flying saucers worked because they were fun. We changed the look of enemies a bit to match our style, but otherwise, they are the same. We also added some new enemies, like a mechanical daddy long legs and a praying mantis… those two will definitely give core EDF fans a run for their money.

As far as weapons go, we have more than 300 this time around. We did try to add a little bit of depth (not realism) with the armor upgrade system. In 2017 you had 1 armor style and in the previous Japanese releases, you had as many as 2. In Insect Armageddon, you now have 4 armor styles to choose from. They gain levels and earn abilities the more you use them. You can focus on one armor to maximize it, or jump into different armors depending on the make-up of your co-op group. They all level independently.

As for mission types, the fans of the series will notice that the missions are longer this time around and with some more varied objectives. We wanted the online experience to take a little longer (on average) than some of the missions in 2017 did, so that when you’re done with a mission, you feel a real sense of accomplishment, not just like you’re waiting for more bugs.

GB: Will there be even more vehicle sections in the game? And will there be any other vehicles other than tanks and choppers?

Brian: In Earth Defense Force: Insect Armageddon, we definitely wanted to address the issues with the controls of the vehicles in 2017, as well as make them more powerful. The premise of the vehicles this time around was that they were supposed to be easy to control and make you feel even more powerful than you already were (which was not easy to do). Also, this way, we could briefly throw even more enemies at you.

To make sure the vehicles felt good, we stuck to just the Tank and the Mech. These were our favourites from 2017 and really played the best if someone else could not get into a vehicle. Now, if you’re playing co-op, everyone in the squad can jump into one tank and man a turret to turn it into a mobile death machine, crushing ants and levelling buildings (on accident, of course).

We also have a number of turret sections, including some level intro sections where you fly in on an EDF lander equipped with turrets for everyone. In some missions you can jump into a number of different turrets (machine gun, anti aircraft, and rocket) and try to hold a position against a massive onslaught. 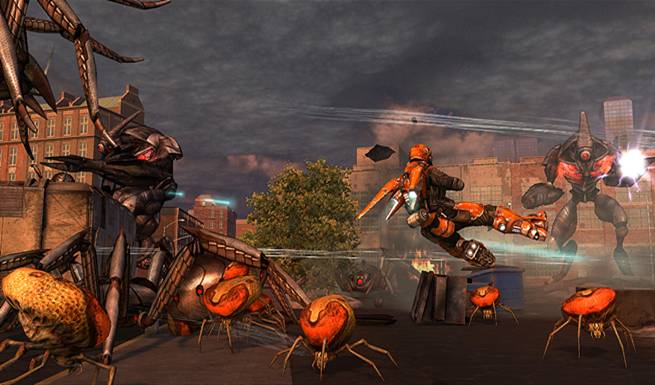 GB: Will we again have a second playable character in Insect Armageddon?

Brian: Earth Defense Force: Insect Armageddon has 4 playable armors. The player always plays as Lightning Alpha, the hero of New Detroit, but Lightning can jump into 4 different armor types to mix it up.

We really wanted to bring back the gameplay style of Pale Wing from EDF 2, so we added the Jet Armor. It not only has the ability to fly, but also uses energy to replenish its weapons, the way Pale Wing did. It’s fast and agile, but very fragile, too.

Trooper Armor is akin to the Storm 1 character from previous games. This armor is no frills, but has access to more weapons than any other armor and also has some really nice upgrades that will make him essential in a group. If you could take your Trooper Armor into an MMO, people would be offering you gold to join their group.

The Tactical Armor specializes in deployables; things like turrets, mines, and radar dishes. As the player advances in levels, they will gain access to new turrets as well as a new gadget here and there. This is definitely a cool class for people who want a wide range of abilities.

The last armor type, and my personal favorite is the slow and hard-hitting battle armor. Not only does it get access to some of the most powerful weapons, it also comes equipped with an energy shield and the ability to bug-zap enemies. If that isn’t good enough, when you get too crowded by enemies, you can blow your entire energy pool in an EMP like electric blast that damages everything around you.

GB: Is there anything else you want to tell us about Insect Armageddon?

Brian: I just wanted to say thanks to all of the people who offered their thoughts on the game in the forums and at all of the events. With their feedback, we were able to get split screen co-op back into the game and make some other tweaks that that fans of the series really wanted to see. If anyone has anything else to say, please speak up! We are listening!