It’s not often that even a few hours into a game you still have little idea what’s going on but El Shaddai: Ascension of the Metatron is one of those games. It’s described as a third person combat title inspired by events in the Old Testament (!) and the premise appears to be as follows… you play as Enoch, a rugged type with big blond hair who is tasked with saving the world. There he was, just minding his own business as a scribe in Heaven – when suddenly all hell breaks lose. 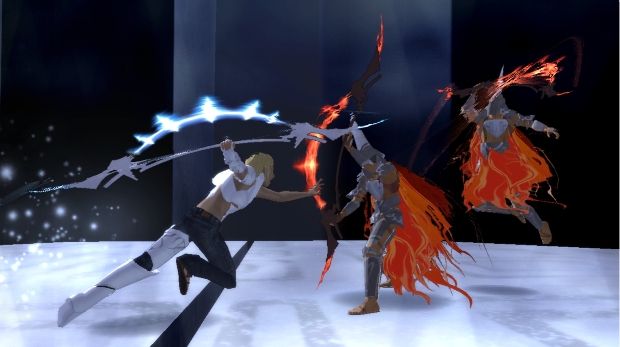 You see, some angels – the Grigori – have defected, succumbing to temptation and deciding to live on the wild side. They’ve headed down to earth and are stirring things up a little. Back in Heaven, there’s some dismay about the Grigori’s actions and they decide to purge the earth with a great flood. Enoch agrees to attempt to track down and capture these seven renegade angels so they can be returned to Heaven and suitably chastised. If he succeeds, the floodwaters won’t come and the earth will be saved. No pressure then.

You’d be forgiven for thinking that a story peppered with biblical mythology from the Book of Enoch, part of the Dead Sea Scrolls, may be a bit heavy going but you’d be wrong. Enoch and his escapades prove strangely compelling – and it’s an amazing journey.

It’s a beautiful game – with an aesthetic quite unlike anything else. The backgrounds look more like a PC screensaver or tech demo than an actual game – and are in many ways quite beautiful like some ancient Japanese painting. The screen is awash with vibrant colours yet it retains a minimalist quality – an expanse of white may be punctuated by only a few splashes of colour one moment only to erupt into a veritable visual feast seconds later. 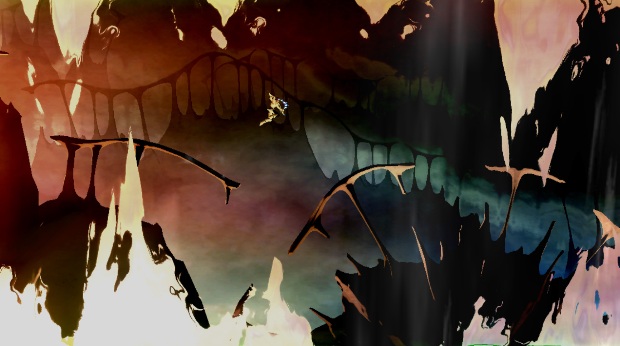 The game often switches from 3D to 2D

But while good-looking, the graphics do feel somehow basic and retro. Switching between 3D and 2D, the appearance of the levels varies enormously – shaking things up a little and offering some welcome variety. The 2D elements of the game feel like something available on the PSN or XBLA – Enoch wandering into the screen one moment and then horizontally the next. It feels truly epic in places, the camera panning in and out to provide a real sense of scale and space. Must admit, visually, I think I preferred the gloriously designed 2D sections.

Besides the baffling story and arty graphics, a nod should also be given to the sound effects that really add to the atmosphere. Booming in places and subtle in others, they are always perfectly suited to the surroundings and the action that’s taking place.

Perhaps a little less positive is the actual gameplay, however, which amounts to basic hack and slash. Combat initially involves a series of punches, kicks and jumps – get hit too often by enemies and your shiny coat of armour is shed leaving you somewhat exposed (it’s very Ghosts ‘n Goblins circa 1985). Although you only need to master the timing of a single button press, combo attacks can be pulled off that result in a satisfying swirl of animation. Blocks and jumps are also key to your progress and attacking ability.

Progress a little further and three weapons can be collected from stricken enemies – each with differing attributes. The Arch is a bow-like blade weapon, Gale allows you to throw darts, whereas the Veil is a powerful impact weapon that also provides a handy shield. 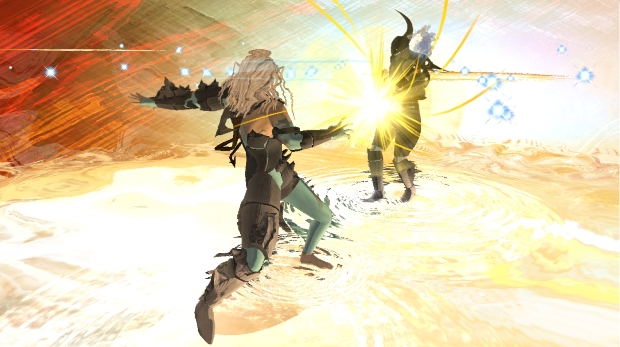 The screen is awash with colour at times

El Shaddai certainly comes from a good pedigree, developed by the guys behind the Devil May Cry and Okami franchises. Japanese influences are on display from the very beginning through its unique art style, voice acting and storyline. As such, it’s a refreshing change from the current crop of games – it’s as mad as a box of frogs but charming with it.

Visually spectacular and quite unlike anything else, El Shaddai is easy to pick up and play, and there's plenty of variety thanks to the switching between 2D and 3D

When it comes down to it, the game is pretty basic. Combat is simple and does get repetitive, and the plot may leave you scratching your head a little

Final Verdict:
GOOD
Completely unique and good fun to play, El Shaddai is a refreshing change and well worth adding to your collection. If nothing else, it's a joy to the senses
A copy of this game was provided by Developer/Publisher/Distributor/PR Agency for review purposes. Click here to know more about our Reviews Policy.