Losing much of the introspection that made Epic Mickey so interesting, The Power of Two drops the thematic intrigue of the original.

The original Epic Mickey fell mildly below expectations for, whilst it sported a hugely innovative take on the Mickey Mouse property, it had a lot of frustrating gameplay flaws. It was a decent enough title, but any game with Thief and Deus Ex designer Warren Spector’s input is bound to be hyped up beyond reasonable levels. Whilst Epic Mickey 1 was the unfortunate victim of unreasonable hype, Epic Mickey 2 is just not that good. Losing some of the story elements that made the original so engaging and offering very few gameplay improvements, The Power of Two is a poor continuation of the Epic Mickey series.

Epic Mickey 2 returns the seminal Disney Mascot to the toon Wasteland, now in a state of disrepair after a mysterious earthquake. The Mad Doctor, now apparently a good guy, warns of a new evil fast approaching and Oswald the lucky rabbit teams up with the doctor and summons Mickey to help out with restoring the Wasteland to its former glory. The plot is delightfully told through classic Disney sing-alongs, with the full voice acting really adding to the Disney magic. The cut-scenes are a bit lifeless and static in comparison to the in-engine action, but the quality of the visuals more than makes up for this, with an elegant and attractive drawing style conveying the story throughout. 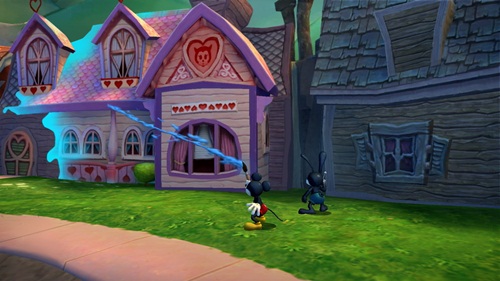 Mickey’s brush powers are back, but Oswald’s electricity doesn’t quite match up.

Much like the original, Epic Mickey 2 is a game that hinges around nostalgia. There are so many Disney characters involved, and in such creative forms, that it hits the soft spots with ease. That said, things get sloppy in the plot department when compared to the original Epic Mickey. The first game took a self-aware look into the occasionally questionable history of Disney, as typified by the often antagonistic relationship between Mickey and Disney’s first creation, Oswald the lucky rabbit. All of that self-awareness and brooding insight is gone the moment the game starts up, with Oswald and Mickey now the best of friends. In some sense the sequel offers a more positive tale of reconciliation as a result, but it certainly feels less creative and original in comparison to the themes of Epic Mickey 1.

Booting the game up as a single player, you’d be excused for thinking things haven’t changed, as Mickey returns with magical brush in hand once more. You can use paint to fill out the environment or paint thinner to destroy your surroundings, as in the previous game, with each type of action often being linked to a binary moral decision. Do you take the easy way out and destroy your obstacles, or labour to help re-create the Wasteland completely? The choices are never particularly insightful, and aren’t likely to warrant an extra playthrough, but it’s a neat feature all the same, and the effects of distorting your environment are as cool to watch as when the original Epic Mickey released back in 2010. 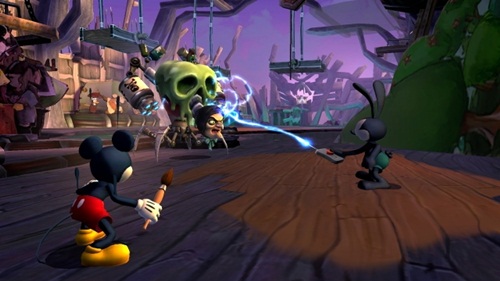 No matter how cool the enemies look, fighting them becomes a real chore.

It’s the now buddy-buddy relationship between Oswald and Mickey that sets up the game’s cooperative gameplay, arguably the biggest new feature in the aptly named Power of Two. A second player can jump in at any time to take control of Oswald, complete with a remote that grants him the power to generate small electric shocks. It’s a drop in and out affair that allows a partner to join or leave at any time, a real boon to encouraging your friends to join in the fray. The lack of online co-op is a bit frustrating, but it offers the kind of experience that works better in a split-screen scenario anyway. Problems are created by Oswald’s inclusion though. His remote controlled electricity just doesn’t appeal in the same way that Mickey’s magic paintbrush does, and his inclusion in single player games highlights some issues with the game’s artificial intelligence. Oswald just doesn’t quite always do what you want him to do. In all honesty it’s impressive how reliable he is in most situations, but his presence throughout the whole game to accommodate co-op play means the single player will find plenty of scenarios during the campaign that will see Oswald cause problems. It’s unavoidable with this kind of game structure.

At least you can’t fault the commitment to the co-op mechanics, as Oswald’s inclusion is factored into all aspects of the game. From combat, to platforming, to puzzle solving, Oswald must work in tandem with Mickey constantly, but it fails to curb the many issues within the game. Whilst combating the oncoming hordes of Blotworx, you must use certain combinations of powers to defeat your foes. Whilst this forces cooperation initially, it soon becomes a repetitive and tedious source of frustration, one that dogs every single encounter. Boss fights serve as a mild highlight, but encountering regular enemies is never a good thing when playing Epic Mickey 2. 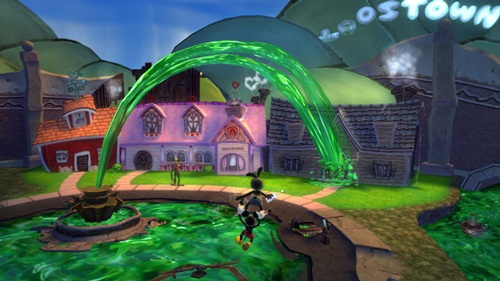 Smaller levels are fine, but the larger sections are poorly laid out and frustrating.

The basic platforming is also an element that, despite some cool tag team moves with Oswald, is a largely unsatisfying part of Epic Mickey 2. Jump heights feel lofty and imprecise, and that blooming camera from the original Epic Mickey is back causing issues once more. Granted, it’s a mile better than it was back in 2010, but it still has a ways to go. The default level of camera pan and zoom often gives a false sense of depth on basic jumps, leading to a lot of frustrating falls. There’s also an issue with the dead zone when using a conventional controller set up that makes firing Mickey’s brush a trying task indeed. Those using Wii remotes or PS Move wands with their respective editions need not worry, but a dual analogue stick set up on Xbox 360 or PS3 means there is an uncomfortable dead zone in the screen center that allows you to move the on-screen cursor before the camera begins to shift. It doesn’t work as well as it sounds, creating a slow and sluggish camera response. You can lock the cursor in place with the select/back button, but it still defaults back to having that same dead zone when you’re firing your paint or thinner. It was a constant source of angst during my play time with Epic Mickey 2, and I was amazed that none of the designers picked up on this during development.

If you can fight against the myriad frustrations and unsatisfying elements of Epic Mickey 2, there is plenty of content to be had. The charm is just about able to sustain your interest throughout, and there is no doubt that the lavish worlds are part of this. The problem is how the content all links together, as the level design is outright poor. Individual chunks of levels offer some decent challenges and gameplay possibilities, but there are several awkward moments throughout The Power of Two where you are left largely unaware of where you should be going next. Good level design funnels players towards their goal without condescending to them, whilst Epic Mickey 2 just gives you voice overs with cryptic and poorly explained directions instead. It’s a poor effort, one that severely harms the gameplay pacing at various points in the game’s reasonably sized campaign. 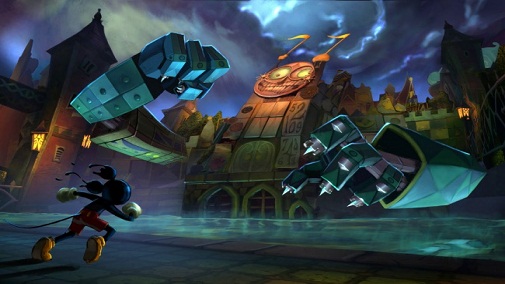 The original Epic Mickey, though a flawed slice of gameplay, offered a dark and insightful critique of the commercialisation of Disney over the years. Epic Mickey 2 defines exactly what the original was trying so hard to bring to the fore for harsh analysis. Despite some truly captivating sing-alongs and an unmatched nostalgia factor, it’s hard to see Epic Mickey 2 as anything more than a cynical continuation of a franchise that only needed one game to convey its message. If you’re a Disney fanatic, you’ll probably find the thematic elements overcome the gameplay shortcomings, but the average gamer should only try Epic Mickey 2 if they’re truly desperate for a new game with local co-op.

Final Verdict:
MEDIOCRE
Losing much of the introspection that made Epic Mickey so interesting, The Power of Two drops the thematic intrigue of the original whilst maintaining its frustrating camera and platforming issues.
A copy of this game was provided by Developer/Publisher/Distributor/PR Agency for review purposes. Click here to know more about our Reviews Policy.