Eternal Darkness Was One Hell of a Game

A look back at Silicon Knights' GameCube horror gem.

As fans of good games generally know, the early-2000s was a fantastic time for horror games and adventure games alike. Technology had rapidly jumped up a notch from the 32-bit era, yet games were still cheap enough to make that they weren’t massive risks that had hundreds of millions of dollars attached to them, so all kinds of crazy ideas could still wind up on store shelves and gamers were far less derivative of each other as they are now. As a result, we got a lot of high budget classics, as well as even more mid-range games that had a lot of the production value that we expected from bigger games but weren’t afraid to cross breed different genres and ideas from different corners in gaming to create unique, memorable experiences. Not everything worked out, but that’s the deal with being creative.

One of the better games from sort of the middle of the budgetary range was Eternal Darkness: Sanity’s Requiem. This is a game that tried some interesting ideas, and ended up benefitting from the vast majority of them. With a game as incomparable as Eternal Darkness, it can be sort of difficult to quantify exactly what makes it such a great game, but we have to at least give it a shot, because a game like this deserves to be recognized for the risks it took, how well it managed them, and how ultimately successful it was in delivering it’s vision to players.

Eternal Darkness: Sanity’s Requiem could be described as an adventure game crossing over with classic survival horror like Resident Evil. With an elevator pitch like that it’s easy to imagine where it could have gone wrong. Action-adventure games are often associated with lots of movement, power, and freedom while survival horror games, especially from that era, are often associated with claustrophobia, limited abilities, and vulnerability. These are two philosophies that might seem like they’re at odds and destined to clash at every turn. This is why back then, and even more so today, these two types of games generally don’t have a lot of crossover in fear of turning into something like Resident Evil 6 as it ends up pleasing nobody despite trying to please everyone. Mixing action and horror is a tough road to walk if you do it that way, where the horror aesthetic is driven by essentially the gameplay of an action game.

But Eternal Darkness: Sanity’s Requiem flips the ratio on that by making an adventure game aesthetic driven with survival horror gameplay. Fixed camera angles, atmospheric lighting, somewhat stilted combat, key-oriented puzzles, you know the drill. But it is improved upon somewhat with more friendly-3D control as opposed to the classic tank controls of its ancestors. It also lets the camera flow around most areas, creating a smooth transition from one angle to the next instead of the sudden cuts that can make walking around in some survival horror games a little disorienting and jarring at times. The game is also broken up into separated levels which minimizes backtracking and your chances of getting lost. This general attitude of taking the groundwork of classic survival horror gameplay and improving on it in subtle – yet effective – ways is a big part of why Eternal Darkness works so well.

The combat system in Eternal Darkness contains perhaps the more interesting and engaging tweaks it introduces into the survival horror framework, and it’s certainly the element you’ll notice first, and most often. Eternal Darkness’ melee weapons as well as projectiles and firearms have a nice aiming mechanism that helps you direct your blows without breaking immersion like, say, Parasite Eve did with it’s almost turn-based JRPG approach to combat. While survival horror games of that era and before it did technically usually allow you to aim a weapon up or down, they rarely gave you much of an indication of how that shot would impact the enemy you’re aiming at without breaking the mood of the fight with complex interfaces and stopping the moment. Usually, games with this combat would just stay on the safe side and let you figure out the rules of aiming on your own. While that did protect the fragile purity of the horror, it would come at the cost of a steep and occasionally frustrating learning curve. Sometimes, you’d get the headshot of a zombie that’s right in front of you, sometimes you’d miss, it was just a crapshoot a lot of the time. 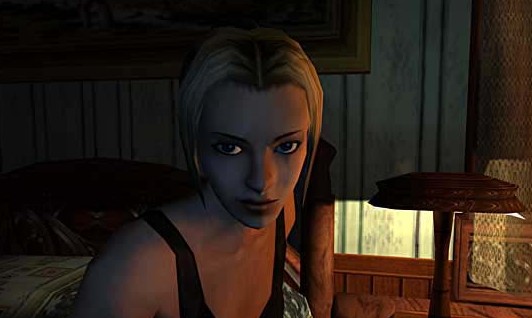 But Eternal Darkness approached that problem with an elegant solution of highlighting the exact body part you’re aiming at and letting you select the portion of the body you wanted to attack with the GameCube’s analog stick in real-time. This would result in the game highlighting the enemy’s torso, head, or other extremities for a quick and simple indication of what you are poised to hit should you choose to hit the attack button at that time. This does perhaps come at the cost of a little bit of immersion for some horror enthusiasts, but I think it’s a fair trade for how much more playable it makes the combat. Infact, I think this simple solution makes the combat in Eternal Darkness one of the best combat systems in the entire adventure/horror genre. At least from this era. It lets you have your cake and eat it too, with the atmosphere and tension that a fixed camera can provide, but minimizing the stiffness and imprecision that it can bring to the combat of so many other similar games.

Of course, this isn’t nearly as big of a deal as the sanity meter in Eternal Darkness. The sanity meter is something that can make or break you during play, as it goes down with every monster encounter and other moments. This is something you want to avoid as much as possible, as the game will absolutely start turning your experience upside down with more disorienting camera angles, strange voices, and even your items disappearing from your inventory. It messes with you the player more than with your actual character in a way that reaches near Hideo Kojima levels of wackiness. If you’ve ever played a Clock Tower game or Amnesia, you’ll probably recognize the general idea of how the sanity meter works, but Eternal Darkness turns this up to 11 and really leans into it to, I think, great effect.

This is where a lot of the game’s finer audio and visual design elements start to show themselves with cool effects and noises that you rarely saw or heard in games from this time, and even less often on the GameCube. Some of them are so fun and entertaining that you might want to play through certain sections multiple times just to see more of them. However, as these “sanity effects” are technically not regarded as a good thing by the context of the game, you do eventually need to snap out of them or avoid them to progress as intended. Your character’s grip on reality can be repaired through either executing enemies or casting one of the game’s many spells. Spells are also used for solving puzzles, revealing doors, and even buffing weapons, so there is that little dash of fantasy in the mix that makes the game all the more unique among its contemporaries.

Overall, Eternal Darkness: Sanity’s Requiem is a game worth playing for many reasons. It’s not the scariest horror game, nor is it the most intuitive action game, but it’s ability to improve on some of the blind spots of survival horror gameplay while providing some fun action and a well-paced story do make it stand out among both genres. While the plot does bounce around the timeline a bit much for my taste and the horror isn’t particularly scary most of the time, it’s still an incredibly unique game that manages to gracefully meld many great ideas that normally wouldn’t go together at all. For all of this, it’s definitely one hell of a game.