Another Etrian crossover manages to get it mostly right.

At first, this fusion might baffle- although both series are old school and unforgiving role playing games, which lay the onus of success and failure entirely on the player’s preparation, how are the two franchises going to work together in tandem? After all, Etrian Odyssey is known for its meticulously crafted maps, its famed mapping system, and its high difficulty that requires just the correct party composition to get through. Meanwhile, Mystery Dungeon is more real time, featuring procedurally generated dungeons, and difficulty that derives chiefly from resource management and party movement.

How will all of this work together, you ask? Surprisingly well, as it turns out. 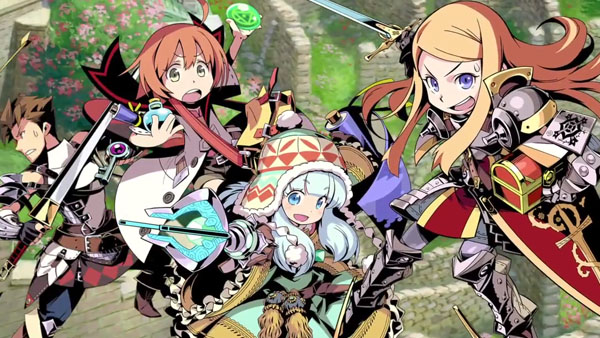 The hint to how Etrian Mystery Dungeon plays is right there in the title: this is more a Mystery Dungeon game than an Etrian Odyssey game. Most of the Etrian Odyssey components seem to be aesthetic window dressing, or just those specific portions of its formula that could be fit into the Mystery Dungeon setup without compromising it too much. Dungeons are all procedurally generated, and you and a party of your choice make your way into them. Like Etrian Odyssey, your inventory space is limited. Like Mystery Dungeon, death can come to you quickly, particularly since fatigue is a very real factor now- every step costs you food points, and the more you garner, the higher your hunger goes. Hunger can be debilitating and can entirely take party members out of commission, meaning it’s in your best interest to keep your party well fed.

That would, in turn, imply that you should stock up on food as much as possible, but that’s a terrible idea. As mentioned before, inventory space is limited, and hunger is but one thing to consider. You also need healing items, especially since the enemies can be so brutal, and you must leave enough space for any loot you find as well.

This kind of resource management has always been central to the experience of Mystery Dungeon, and so it is here as well. Every dungeon and every enemy encounter in Etrian Mystery Dungeon is high stakes, particularly since death has actual consequence this time around, and since you don’t get to keep your loot unless you escape the dungeon with it.

Actual enemy encounters are pretty much the same here as they are in other Mystery Dungeon games- you and your party of three are on an enemy grid, and your movement and positioning matters for a lot. The battles are all turn based, meaning your enemy does not move or attack until you do. This lends an element of tactical strategy to each encounter, as you try to get into an advantageous spot before you are forced to engage with an enemy, try to surround them, or just try to escape unscathed. Enemies in Etrian Mystery Dungeon are very difficult- sometimes they are just ridiculously powerful, and the worst part is, each time they defeat your party member, they level up, in the middle of battle, just as you would, making them tougher still.

All of this said, the one Etrian Odyssey convention that makes it through to this game is the importance of party composition. This cannot be stressed enough- your party composition can single handedly decide the outcome of your sojourns into the dungeons. You have four slots, and a slew of characters, each from different classes, to choose from. What classes you take with you determines how the battles in the dungeon will play out. 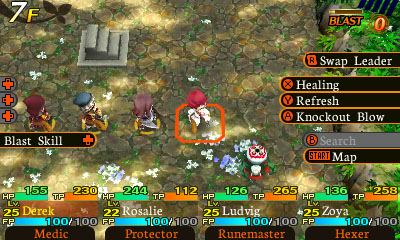 "Unfortunately, there is no direct control over your party members. Worse still, the 'gambits' that let you decide just how they will act and react on the field are pretty limited too. "

Unfortunately, there is no direct control over your party members. Worse still, the ‘gambits’ that let you decide just how they will act and react on the field are pretty limited too. This means you are often at the mercy of CPU characters making just the right choice at the right time, which they often do not, leading to a complete loss of progress in a given dungeon. While this would be frustrating at the best of times, here, it’s flat out diabolical- since the penalty for failure is so harsh, and since, in this case, the failure is not even your fault, it just stings.

Thankfully, more often than not, CPU characters do make the right choices- I just wish that some form of direct control, or better gambits, would have been offered.

If all of this sounds too intimidating, it should. Etrian Mystery Dungeon is a very difficult game, and it makes you work for your success, instead of just handing it to you on a platter like so many other modern games do. More than, perhaps, even the mainline Etrian Odyssey games, which are notorious for their high difficulty level to begin with, EMD is a game that is more than happy to stack the deck against you, without apologies.

That said, it is also a fair game, and as such, it gives you multiple tools that, if used correctly, can make the experience far easier than it would be otherwise. For instance, you are allowed to build forts. Forts are highly useful structures- they ‘lock’ a dungeon floor (meaning it is no longer procedurally generated after the fort is built, and instead is stuck to the layout it was on when the fort was built), they allow you to continue your dungeon run straight from them, instead of having to start all over again, and when really powerful enemies known as DOEs try to make their way towards your home base city to wreak havoc, forts act as a line of defense and turn them away.

Forts also let you send secondary party members there to train and gain experience passively, and they are just all around useful structures. Because of all of this, they also cost a lot of money to build, but they become an integral part of the metagame. 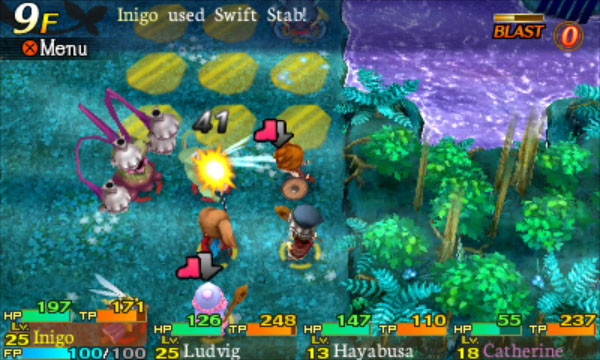 "In a sense, Etrian Mystery Dungeon is made from the same mold as games like Monster Hunter 4 Ultimate or Bloodborne. It is a game that makes you work for success, it is a game that likes making things difficult for you, but it is also never unfair."

You may have noticed that I have talked mostly about the gameplay here, and that’s because the gameplay is really all that there is. Etrian Mystery Dungeon is a game that lives and dies solely by its gameplay. Yes, there is a story, but it’s barebones, receded into the background, and almost entirely inconsequential. The graphics are bright and charming, but nothing more or less. Above all, they are functional, conveying all the necessary information. The sound is catchy and upbeat, but can quickly begin to get annoying.

In a sense, Etrian Mystery Dungeon is made from the same mold as games like Monster Hunter 4 Ultimate or Bloodborne. It is a game that makes you work for success, it is a game that likes making things difficult for you, but it is also never unfair. Success in EMD is hard won, and it is all the sweeter for that. It is a very long game, and it lends itself to further replays, meaning you are going to be spending a lot of time with it if it ‘clicks’ with you.

But that’s the thing- it might not. Even if you’ve been an evangelist for the core Etrian Odyssey games, there is no guarantee that you will like Etrian Mystery Dungeon. It’s a completely different breed of game, albeit cut from the same cloth.

If it does, however- then you’ll be playing Etrian Mystery Dungeon for a very long time to come.

Engrossing and demanding gameplay that values and emphasizes player agency over anything else; success is earned, not handed, in Etrian Mystery Dungeon; countless hours of play time, should the game click

Highly difficult and demanding, made even more frustrating by automated party members; unyielding and uncompromising gameplay design, which might not endear itself to all players

If it does click for you, then you'll be playing Etrian Mystery Dungeon for a very long time to come.

A copy of this game was provided by developer/publisher for review purposes. Click here to know more about our Reviews Policy.
Tagged With: Atlus, etrian mystery dungeon, etrian odyssey, Nintendo 3DS, spike chunsoft