Exception developer Will Traxler speaks with GamingBolt about the upcoming 2.5D action platformer.

Exception immediately grabs attention with its visual aesthetic, but looking beyond that, it’s still looking like an interesting concept. Combining its 3D environments with 2D platforming and combat, the 2.5D side scroller is looking like it could be worth experiencing, if done right. Recently, we sent across some of our questions to the game’s developer, Will Traxler, hoping to learn more about it- scroll on to read our conversation. 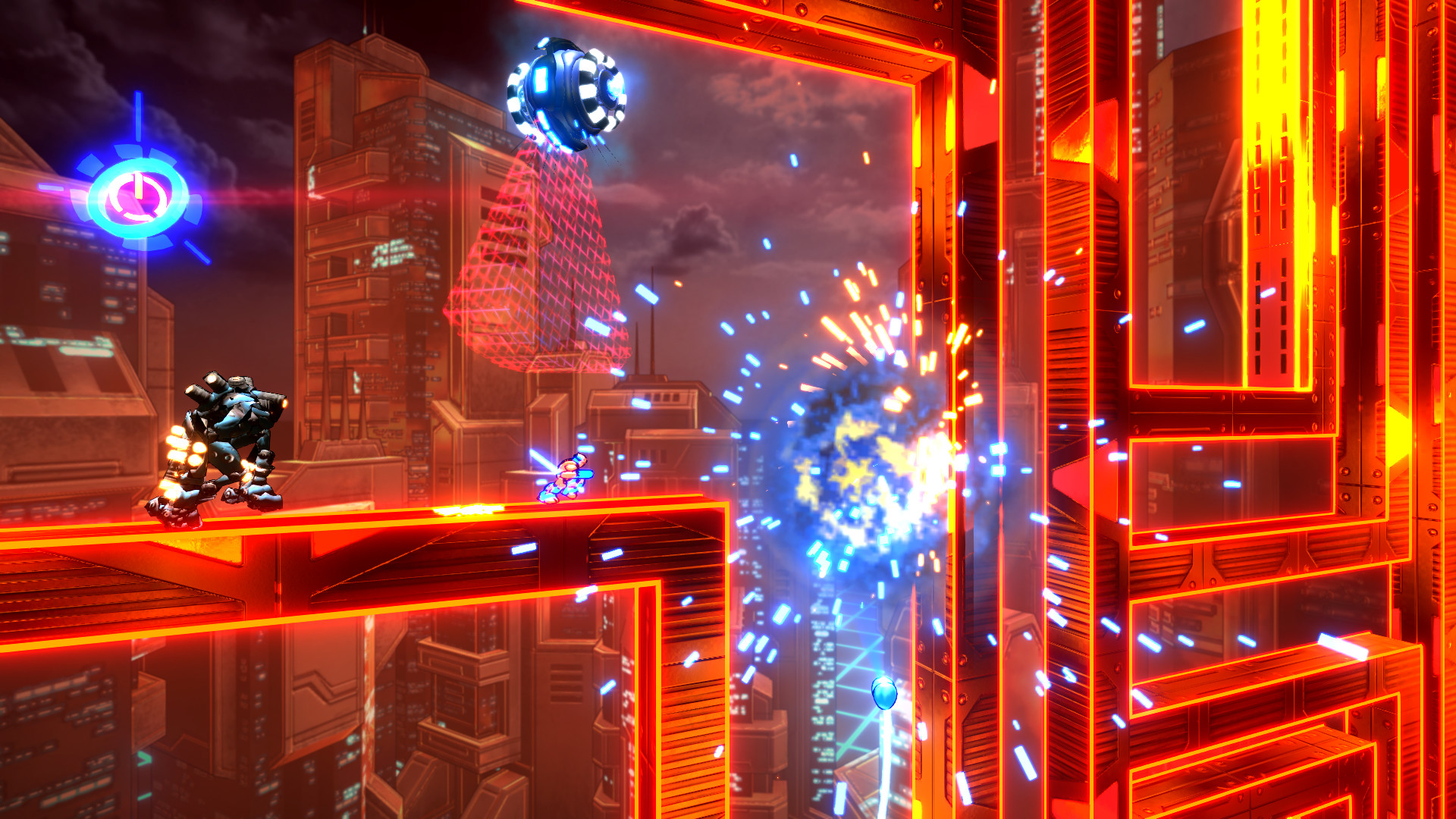 "Most platformers are sprite-based with 2D environments. I wanted to make a platformer that was built in a 3D environment with 3D models, particle effects… the whole nine-yards. "

How did you land on the concept of 2D gameplay in 3D environments?

The concept sort of came about by accident. Most platformers are sprite-based with 2D environments. I wanted to make a platformer that was built in a 3D environment with 3D models, particle effects… the whole nine-yards. The main goal was to introduce some visual elements that typically aren’t available in 2D platformers.

After creating a basic platformer framework, I started toying with the idea of levels that transform in simple ways. It started with some basic platforms that would shift around as the player moved through a level. This evolved into more elaborate transformations where multiple floors and walls would shift in unison at various points of the player’s progression.

Finally I was playing with the game engine one day and realized I could just make the entire level transform. In a 3D engine there are really no restrictions on what you can manipulate. It’s not much more complicated to rotate or move an entire level than it is to manipulate a single object like a cube. From there on I decided to just focus exclusively on the level transformation mechanic.

How does that style of gameplay affect combat in particular?

The most interesting combat element presented by the level transformation mechanic comes from the fact that enemies all exist in what is called ‘local space’. This means that as levels rotate and transform, the enemies maintain their original orientation, gravity etc. So if an enemy is patrolling a platform and the level flips upside-down, that enemy will end up walking on the ceiling. They will still attack and chase the player, but the altered orientation introduces some unique combat elements.

Can you tell us about how that affects level design and progression through levels itself? Are we talking puzzle solving, branching paths, and hidden areas?

Level design was probably the toughest aspect of Exception’s development. It took a lot of trial and error to design levels that don’t overwhelm the player with complexity. At its core, Exception is an action game and I tried to avoid situations where the player needs to stop and analyze a situation. Instead, the player is given the opportunity to explore a level and discover how it unfolds.

When you have a level that rotates sideways or upside down, this can open up a lot of interesting opportunities for the player. Although each level was designed with a particular path in mind, there are several points in the game where a player can bypass the intended path and find creative ways to complete the level. There’s actually a bonus awarded to players which complete a level without activating all of the transformation points. 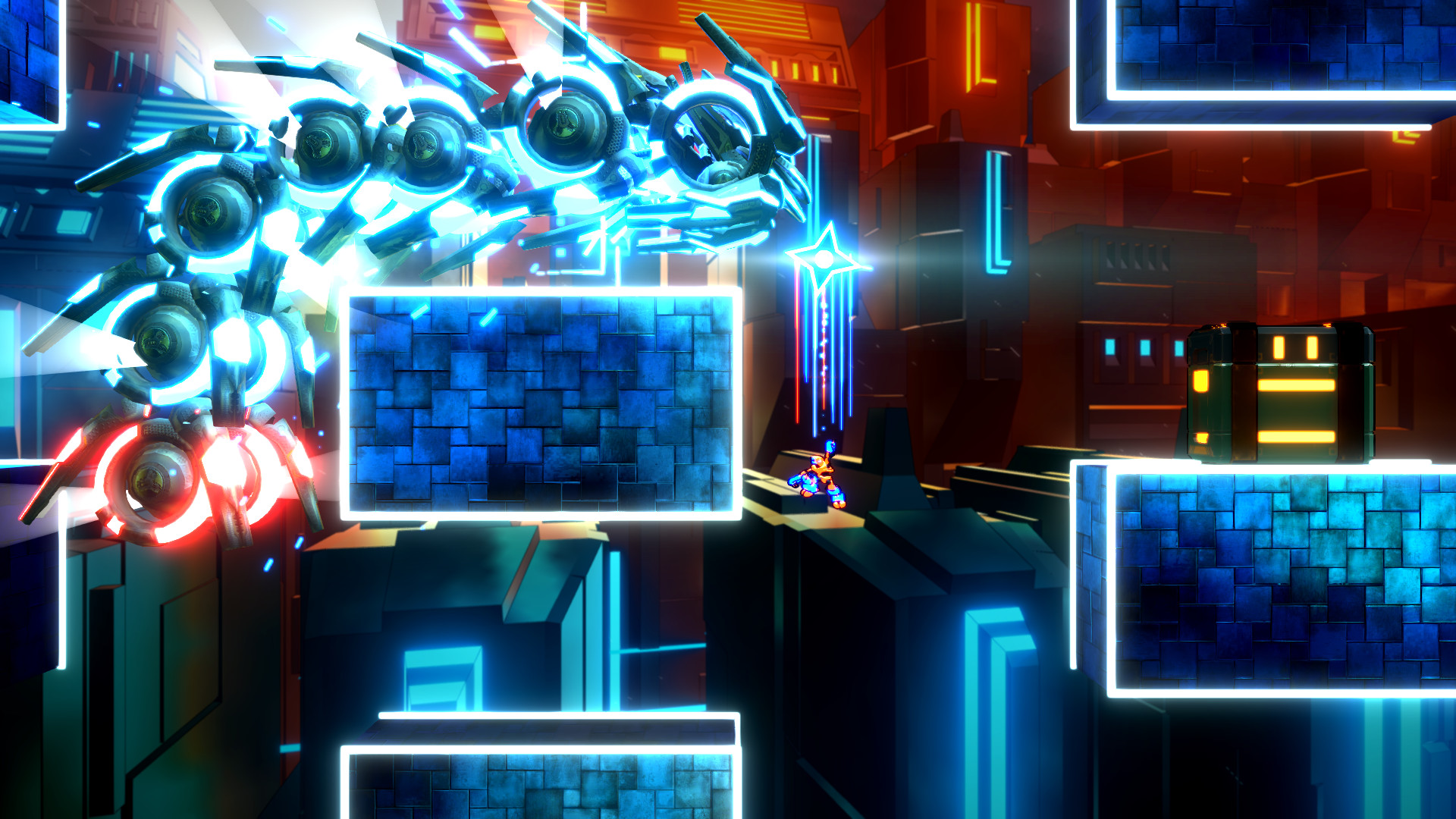 "Exception is a challenging game but it’s designed to be accessible to a range of skill levels."

Combat-focused platforms often put a lot of stock in really challenging players with their difficulty- should we expect a similar experience with Exception?

Absolutely not! Exception is a challenging game but it’s designed to be accessible to a range of skill levels. The game has an assist option that lets the player increase the number of hit points available to their character. Now, there is a hefty time penalty applied to the player if this option is enabled, but it should give everyone an opportunity to enjoy the content without sacrificing the competitive aspects of the game.

How is character progression and upgradation going to function in Exception?

There are two systems that work for the character upgrades. First, the player is able to unlock new attacks by achieving time bonuses for each level. For every level, the player is awarded a score from one-star to four-stars based on how quickly they complete the level and which bonuses they are awarded. The more stars accumulated by the player, the more quickly they will unlock new attacks.

The second system that determines the character upgrades involves items hidden in each level. These items are called ‘bytes’. In some circumstances you’ll need to bash through a destructible wall or access some far-flung area of the level to collect a byte. The player gets a visual clue when a wall can be destroyed. The bytes are used in an upgrade screen to power-up the character’s special attacks.

How much of an emphasis does the game place on story and storytelling?

There are 17 story sequences spread throughout the game. The player has the option of watching these at the completion of each level or they can go back and watch any story sequence that has been unlocked from the Main Menu.

Can you talk us through how Exception’s dynamic bonus system works?

It’s pretty simple actually. The goal of each level is to finish as quickly as possible – pretty standard stuff. Well, in addition to the time a player achieves, it’s possible to accumulate bonuses during a run which can reduce that time.

For example, say a player finishes a level in ten seconds. During that run, the player performs and aerobatic attack that destroys multiple enemies using different attack types. Perhaps the player also destroyed every single enemy on the level. Both of these events create bonuses for the player. That ten-second completion time might actually result in a final time of eight-seconds after the bonuses are considered.

The goal is to create incentives for players to apply creativity to their speedrunning. The fastest time might be a straight line from point-A to point-B, but the best leaderboard score might involve some elaborate techniques.

Are there any multiplayer or co-op options on offer?

Each level has an online leaderboard where players can compare their scores against competitors from around the world. 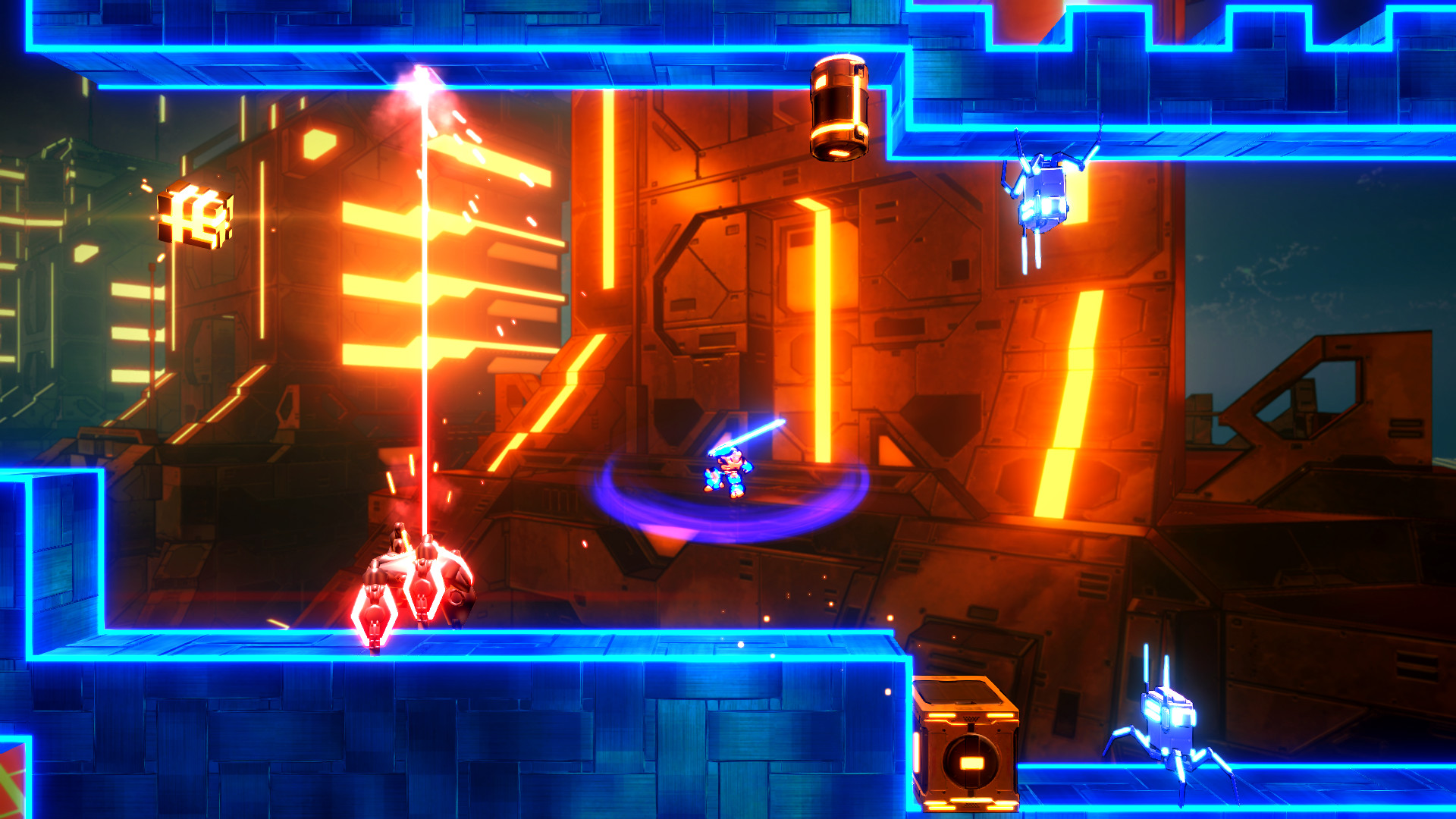 "I think we’re going to see SSDs have the biggest impact on open-world titles that constantly stream textures and models into a scene."

Exception’s art style is something that catches attention in the best way possible at first glance- can you talk us through the process of how you landed on this aesthetic?

I’ve always been a fan of the aesthetic from the Tron movies. I grew up in the 80s and am fascinated by the comparatively low-tech effects used in much of the media from that period. I initially wanted to come up with an 80s style old-tech feel for Exception. Over time, the visuals evolved into something more elaborate but the neon persisted through every revision.

The Xbox versions are both locked to 1080p. In addition to higher frame-rates, the Xbox One X version has access to anti-aliasing.

Like the One X, the PS4 Pro version has some anti-aliasing effects enabled for better visuals. The framerate is also slightly better than the stock PS4.

Both are running at 1080p. The framerate hovers around 60fps.

The Switch version runs at 720p in both dock and undocked modes. In undocked mode, the background resolution is scaled down slightly to improve performance. I think Switch players will be very happy with this version. The foreground action is nearly identical to what PS4 and Xbox One players experience. I was really impressed with the Switch’s hardware capabilities.

I think we’re going to see SSDs have the biggest impact on open-world titles that constantly stream textures and models into a scene. Level-based games like Exception may see less of a benefit from SSDs since most of the assets are loaded up-front and the load times are already brief. I’m sure that developers will come up with some great new uses for SSDs once these become standard in consoles. I’m looking forward to seeing where this goes. 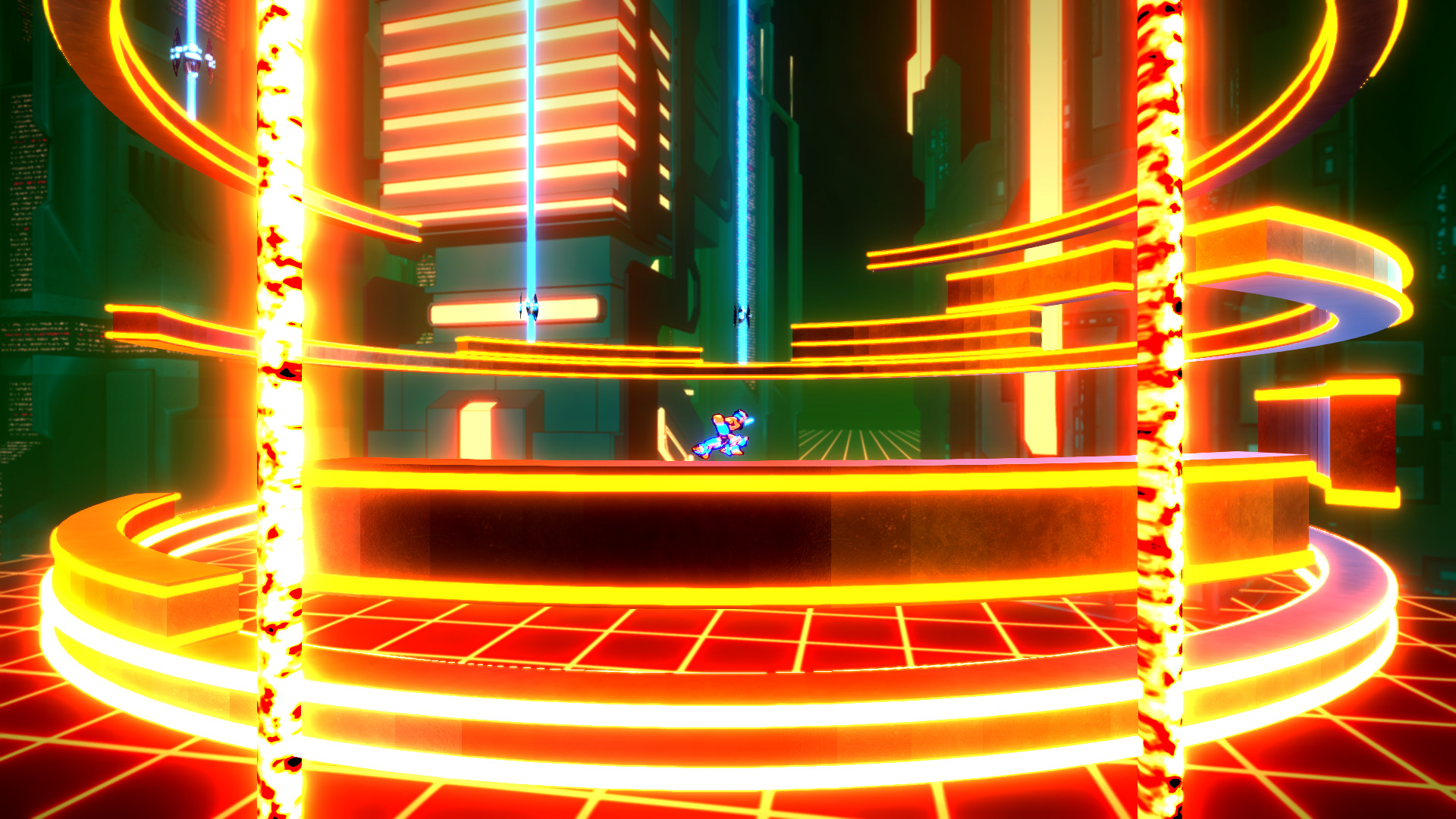 "I’m really excited to see how the new hardware performs. Optimizing a title for consoles is challenging, especially when console hardware is close to five or six years old. I think this is less of an issue for large studios, which can afford to assign a few developers to optimization alone. For a one-man shop, it’s tough to allocate a huge amount of time to optimization."

The PS5 and Xbox Scarlett will both have a Zen 2 CPU processor, which is a major leap over the CPUs found in the PS4 and Xbox One. How will this help you in developing games of the future?

I’m really excited to see how the new hardware performs. Optimizing a title for consoles is challenging, especially when console hardware is close to five or six years old. I think this is less of an issue for large studios, which can afford to assign a few developers to optimization alone. For a one-man shop, it’s tough to allocate a huge amount of time to optimization. Any hardware advancements that create meaningful performance improvements mean that I can spend less time on optimization and more time on content creation. I’m excited about that. Can you tell that I’ve been working for a year and a half preparing Exception for consoles?

This is my first game so hopefully backwards compatibility will keep it from being left behind as new hardware becomes available. With the advent of digital storefronts, this could be a win/win for consumers and developers. If the previous-generation titles are still selling on new hardware, it gives developers an incentive to update the old catalog to take advantage of new features.