Light shining off the shiny contours of the cars, the heat rising up from the sun-soaked tarmac and the rasping engines primed to roar off from the starting grid. Both presentation- and content-wise, F1 2011 from Codemasters Birmingham is absolutely top notch. Racing aficionados will love the realism and relish the multitude of options. All the sport’s official teams are there, along with the likes of Vettel, Hamilton and Alonso. A couple of new circuits have also been thrown in for good measure too, including Delhi’s Buddh International Circuit in India and Germany’s Nürburgring. 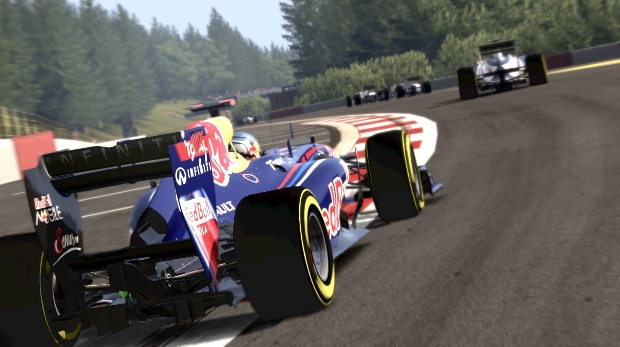 For fans of the sport, this is about as good as it gets

But unlike your typical annual update, F1 2011 boasts numerous enhancements over the previous edition that really do physically affect the game. Beyond the solo player modes, 16 players are able to compete online, accompanied by eight ruthlessly tough AI cars. You can now also be joined by a friend to play through an entire season in the new co-op Championship mode or compete in split-screen races.

Opt for the full-blown Championship and you get to choose everything from your team to your helmet. A trailer is on hand to see your schedule, check emails from your team or find out the weather conditions for the next race.  When you’re done, pop on your helmet, wedge yourself in the driver’s seat and get stuck into the qualifying and racing. You start as a lowly rookie and have to work your way through the ranks, building up your reputation.

You’ll be pleased to know that this time round, there’s an improved garage and paddock area where the race team is able to tweak the car before a race to ensure optimal performance. The occasional TV interviews between races actually have a bearing on the rivalries and your reputation, while the safety car also makes an appearance – which is a nice touch. 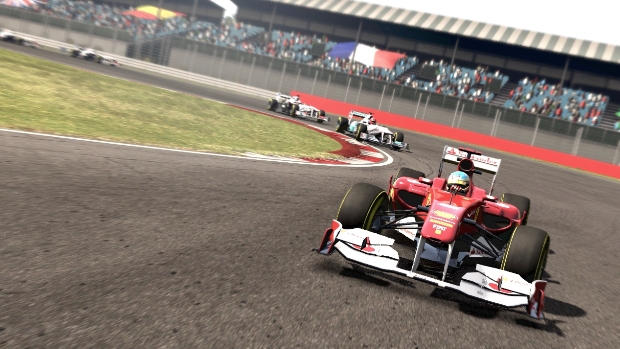 Cut corners or drive too dangerously and points will be docked, plunging you down the standings at the end of a race. Do well, however, and you’re presented with some nice celebratory animation sequences that show your chosen driver shaking his fists and looking overjoyed by his performance.

Every so often your engineer offers some sage advice through your earpiece, telling you useful inforrmation like how Vettel is doing is or that Hamilton is five seconds behind.

Notably it also features the rule changes for the new season. The inclusion of the Kinetic Energy Recovery System (KERS) can provide a much needed – albeit temporary – speed boost, while the addition of the Drag Reduction System (DRS) opens a flap on the rear wing of the car to reduce drag and raise your speed. This can only be called into action at certain points around the track, however, which adds a nice tactical element to proceedings.

Although some of the circuits are in exotic locations blessed with nice weather, you’ll also often be unlucky enough to have to race in the rain. Although this has a noticeable effect on your driving prowess and requires a slightly different technique to ensure success, you can’t help but love speeding about in a downpour. The effects look fantastic; rain droplets splashing up on your screen and visibility getting more and more restricted as your rivals’ tyres kick up water from the track.

Everything matters, from the amount of throttle, oversteer, understeer, the tyres you choose and when and how to overtake. It’s very easy to collide with walls, completely misjudge a turn and go wide or spin out and end up in the path of oncoming traffic. The performance and handling of this year’s edition has been much improved on the last. 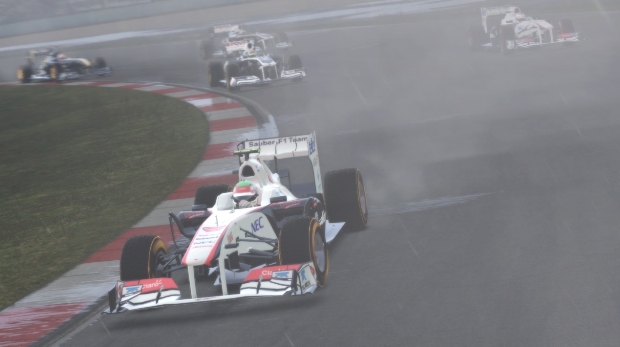 The weather effects are fantastic and really affect your driving

Thankfully, being a relative newcomer to the sport, the game’s settings can be altered to be as easy or as unforgiving as you like – the harder difficulties see the other drivers step up a gear, their dynamic AI meaning you really will need your wits about you to emerge from a race anywhere near the top ten. Get a podium finish on a harder setting and it’s well deserved!

This is far more  a simulation than an arcade racer, especially when you ramp up the difficulty. You’ll be impressed by how important it is to watch every aspect of your performance. There’s nothing more annoying than completing countless laps only to screw up a bend at the end of a race and drop down the pecking order.

If you don’t want to undertake the lengthy Championship mode, activate your VIP pass to race online or try your hand at the various challenges in the Proving Grounds and the Grand Prix option that allows you to race round your favourite circuits in any order you please. These vary in difficulty and require completely different driving styles. Each track is lovingly recreated and oozes authenticity.

We got the chance to test out the PlayStation 3 as well as the PC versions of the game and there are absolutely no differences at all.  Obviously with a high end PC you will get better textures and shadow effects, but other than that the two versions are practically the same.

In summary, F1 2011 is exactly what an annual update should be; a fantastic game that builds on its predecessor by adding some great new features and ironing out the niggles. It’s tough, great to look at and fun to play no matter what your racing pedigree.

Graphics have stepped up a gear from last year, while everything else from the sound effects to the handling are sublime

Maybe a little tricky for those new to the sport. The difficulty is pretty harsh - can be hugely frustrating when a single mistake wrecks your race

Final Verdict:
SUPERB
Fans of F1 will lap this up, while even the casual racer will get a lot of pleasure from Codemasters' latest effort. It looks, sounds and feels like the real thing!
A copy of this game was provided by Developer/Publisher/Distributor/PR Agency for review purposes. Click here to know more about our Reviews Policy.