Posted By Rashid Sayed | On 10th, Nov. 2009 Under Reviews | Follow This Author @GamingBoltTweet

Let’s face it – if you’re reading this then you probably own Fallout 3, and if you own Fallout 3 then you more than likely love it just like every other person who has played the game.  As such, any chance you get to dive back into the post-apocalyptic world of Fallout 3 is a chance you should take.  Point Lookout is no exception.  In fact, it’s probably the best Fallout 3 DLC available.

This expansion begins with your character being ferried across a body of water to your destination – Point Lookout.  Once there, it becomes apparent that a combination of in-breeding and radiation has resulted in quite a variety of mutated hillbillies and hideous beasts.  Some of these poor creatures want your help, while others more or less just want to kill you.  It’s still the good ol’ Fallout 3 formula.  You know the drill.  There are plenty of morally gray decisions to be weighed and VATS- assisted exploding head shots to be made. 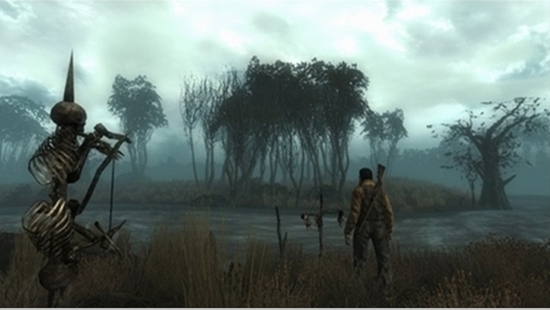 As forbidding as ever…

The quests in Point Lookout are really a blast, and the story is so dark and so humorous that it’ll either send chills down your spine or make you laugh out loud.  Probably a little of both.  For those of you who enjoyed the American history woven through the story of Fallout 3, there’s a good chunk of Civil War history intertwined throughout this story as Point Lookout is a historical landmark from the American Civil War.  The terrain looks great, especially in the swamps, and is a nice change from the Capital Wasteland.  Between the main quests and the various side missions, there is enough exploring and action in this expansion to keep you busy for upwards of 10 to 20 hours of gameplay, which is a lot more gaming than most DLC offerings. 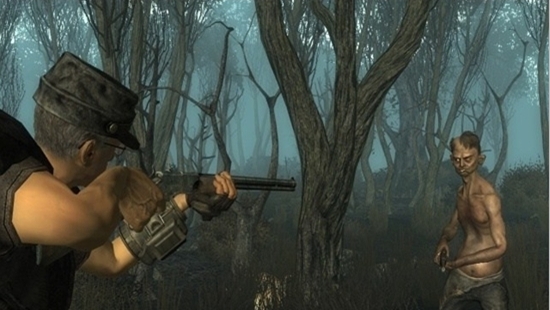 I’m going to enjoy this way too much, punk.

I wish all I had was praise about how Bethesda worked out all of the kinks this time around, but the expansion still has its share of shortcomings.   The biggest of these is the fact that glitches from the original game carry over into the DLC.  Game freezes, corrupted save data, and glitchy quests are still there to induce controller throwing fits.  However, if you got used to the glitches in the original, they’re not likely to keep you from enjoying your experience with this expansion.  Aside from the looming technical difficulties, there really aren’t many problems with the actual game itself worth complaining about.  There aren’t many new weapons or items this time around, which is a bit of a bummer, but also not a huge deal. 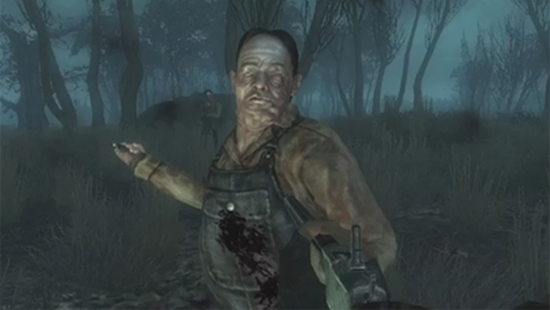 Nice to meet you too!

With Point Lookout, Bethesda has given a near-perfect reminder of why we love Fallout 3 so much.  This game is simply a joy to play.  A dirty, morally questionable joy – but a joy nonetheless.  If you’re looking for a chance to jump back into the world of Fallout 3, Point Lookout is a great place to start.  If you have qualms about getting ripped off by DLC that’s light on content and heavy on price, don’t worry.  This expansion is worth every penny.

Quests that are just plain fun. Same great Fallout 3 gameplay. Dark humor at its finest. DLC worth its price tag.

Point Lookout is a worthy addition to an already great game.

A copy of this game was provided by developer/publisher for review purposes. Click here to know more about our Reviews Policy.
Tagged With: Fallout 3, pc, ps3, xbox 360