The Pitt is the second DLC for Fallout 3, following Operation Anchorage. It adds some much needed things that Operation Anchorage didn’t have, but it also removes features that the DLC should have. But that doesn’t mean that it’s a bad DLC, but it could have easily been better. 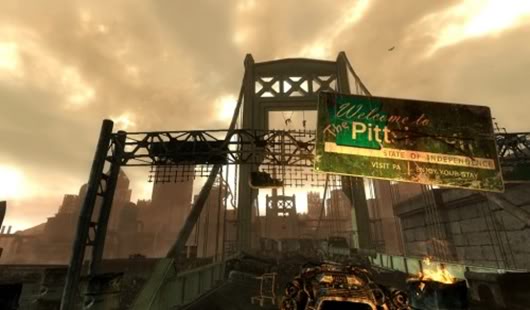 Like Operation Anchorage, you start The Pitt by recieveing a radio transmission by Wernher, an escaped slave who needs help freeing the slaves from The Pitt and stealing a cure to mutation unlike anything you can find in the Capital Wasteland. You follow this transmission to the far north of the map to find Wernher being attacked by Pitt Raiders, slavers from The Pitt. They are killed quickly and Wernher explains about the mutation, the cure, and Ishmael Ashur, the leader of the Pitt Raiders, the ones enslaving the people. You travel to The Pitt, where you continue across the bridge to the gate. There, Mex, a Pitt slaver, will take your equipment. Earlier, you were given a choice whether to take a .32 pistol or a knive from Wernher, which will stay with, hidden from sight.

The gameplay sticks to that of the base game. You will do few new things during your time in The Pitt. The area, which wasn’t directly hit, looks a lot like the downtown area of the Capital Wasteland. Not much new to see here, but there are some new things. The mutations mentioned earlier create the new enemy, the Trogs. The Trogs resemble the Lickers from Resident Evil 2. 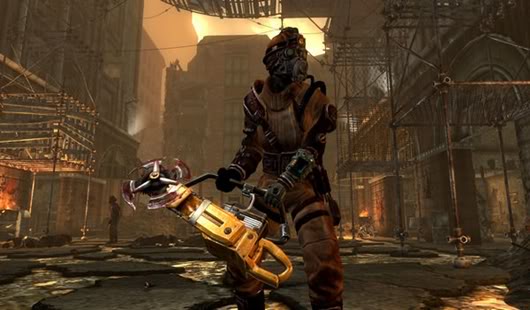 There are also two new base weapons, the Auto Axe and the Infiltrator, which each has enhanced versions. There are also enhanced versions of the .32 pistol, brass knuckles, and laser rifles. The Auto Axe, shown in the picture above, is an automatic melee weapon that functions like the Ripper, which can also be used to repair the Auto Axe. The Infiltrator, in some ways, is an enhanced version of a base weapon. It is a silenced, scoped, stockless and less powerful version of the R91 Assault Rifle. This is a great weapon to have for players that are using stealth techniques, as it doesn’t attract the attention of other enemies when attacking. For instance, in one area, there were three Pitt Raiders in a building. I snuck into the complex and walked into a man-made hammock area. I killed one Raider without alerting his buddies. Then, repeated to do so, killing two unknowing Raiders and on that was sleeping. The Pitt is a fun, yet short, DLC that is worth checking out for those who want a distraction from the Wastes.

Final Verdict:
GOOD
The Pitt offers pretty much more of the same, but that's not necessarily a bad thing.
A copy of this game was provided by Developer/Publisher/Distributor/PR Agency for review purposes. Click here to know more about our Reviews Policy.