I believe it was Blake who once said that “without contraries there is no progression.” Fallout: New Vegas is a game that is loaded with opposing forces, whether it be the choices you face as the player, or the warring factions you encounter during your adventure. Yet whilst the contraries may be present, the sense of progression is not at all. In fact, for a large majority of the game, the only thing that distinguishes New Vegas from Fallout 3 is the orange hue that the HUD now sports. It has been two years since Fallout 3 and with the original Fallout developers, Obsidian, at the helm once again I thought more improvements would have been made to the existing formula.

Case point number one has to be the visuals. The graphics sported in Fallout 3 were of a reasonable standard back in 2008, but nowadays they just seem a bit dated. I realise we’re starting to max out the graphical potential of this current console generation, but I know for sure that they could’ve squeezed a bit more juice out for New Vegas’ visuals. Suspect animations, lacking texture details and a pretty poor draw distance all added up to a point where it just became frustrating, and this was the game running at the highest graphics settings. I don’t even want to imagine how horrible this game looks on lowest setting.

The gameplay too fails to inspire in terms of new additions and content. There are new items and weapons to use and wield, but the combat is still largely unchanged. The VATS system returns and it is as fun and gruesome to pinpoint target your foes’ vitals as it was back in 2008, but the gunplay still lacks a certain satisfaction that other first person shooter titles offer. I realise Fallout is an RPG and this isn’t the primary focus, but it would have been nice to see the edges smoothed out for this sequel. Sadly we are left with the exact same game engine we used in Fallout 3, for better and for worse. Possibly the only real advancement in terms of gameplay we see in New Vegas is the ability to craft items and medicine at camp fires and to modify your weapons at a workbench. The system is interesting and versatile enough, but really doesn’t cut the mustard when you consider that it is the only new gameplay element in New Vegas. 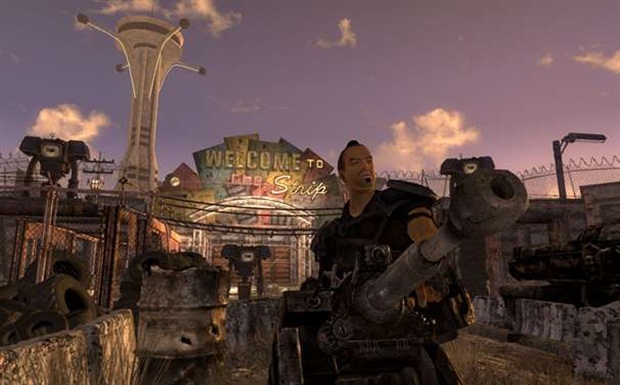 This flashy mini-gun is pretty much the only new addition to Fallout: New Vegas

In terms of story and narrative, it isn’t actually a lack of progression that is the problem, as the plot is much worse than it was in Fallout 3. The opening to Fallout 3 carried you through the entire childhood of your protagonist, lending a sense of attachment and immersion to the game world and to your character. The opening to Vegas sees your hero shot whilst s/he’s on a delivery job. You then wake up, reset your skills and appearance and set off to take revenge on the guys who tried to kill you. It remains a pretty by the numbers plot throughout but, in comparison to Fallout 3, I felt almost no attachment to the game world and I couldn’t have cared less what happened in the story. The game world was also far less memorable, but still has the awful problem of forcing you to walk miles and miles to get from one point to another. Faster methods of transport are essential in games with a scope as large as that of Fallout: New Vegas. Unfortunately New Vegas has the scope and large map, but no reasonable way of moving around it quickly. 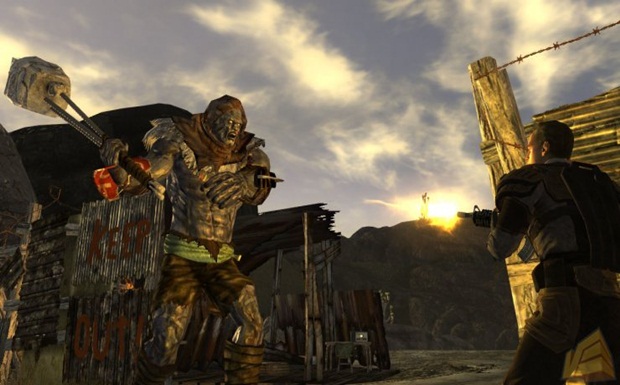 One of the more pleasing aspects of New Vegas is its use of audio. It may be similar to the audio in Fallout 3, but the incidental music was always appropriate and well timed and the voice acting is still a class act. The sound effects also have a nice habit of distorting and time stretching to match the slow motion kill cams. It’s a pretty standard audio trick in any game that uses any slow motion sections, but it sure does hit the spot.

For those who are that desperate for more of the same, you’ll find that New Vegas will give you a mighty large amount of content. The game map is huge and is certainly at least as big as the map from Fallout 3. The main quest will take a good twenty hours at least, but the side quests can lengthen New Vegas to the point of it being almost infinite in scope. There really is quite a lot going on in New Vegas, though you’ll almost certainly be bored of New Vegas long before you’ve discovered all of its content. The achievements/trophies are pretty decent and varied with few of those annoying “collect them all” challenges. 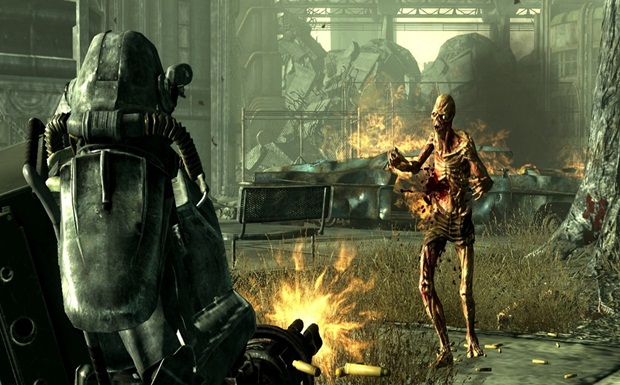 Is it Fallout: New Vegas or Fallout 3? Does it really matter?

Fallout 2 wasn’t that different from the original Fallout, yet we are at a time now where we expect more from our sequels. Remember that awesome bit in Fallout 3 where you see the outside world for the first time and you get that cool solar flare effect? Even that has been recycled and reused in Fallout: New Vegas, but second time around it really fails to arrest your attention. If you missed out on Fallout 3 you may find some enjoyment in New Vegas, otherwise you’re wasting your money for what is little more than a glorified expansion pack. There’s definitely £40/$60 worth of content in New Vegas, but it really is just a lot more of the same. It’s a good game in all, but it’s the same good game we were playing two years ago.

Less memorable than Fallout 3, dated graphics, combat becomes repetitive, far too much running from A to B, poorly paced

Final Verdict:
FAIR
New Vegas retains all the good aspects of its predecessor but fails to improve or enhance upon Fallout 3 in any meaningful way, leaving us with what should really be considered an expansion pack rather than a sequel
A copy of this game was provided by Developer/Publisher/Distributor/PR Agency for review purposes. Click here to know more about our Reviews Policy.