Assuming control of Rex Power Colt, Blood Dragon opens with a scene any first-person shooter aficionado will be familiar with – an on-rails shootfest from a helicopter’s chain gun.

Although this set piece is as familiar as breathing, somehow it still manages to feel incredible. Partly because everything is exploding and sparking, giving the player a satisfying sense of feedback, and partly because the helicopter is blasting ‘long Tall Sally’ from its speakers, causing intense feelings of awesome.

There’s no worry about the gun overheating – you just stick out your tongue, cross your eyes and squeeze the trigger whilst stuff happens.

"The year is 2007, and it’s the future - at least a vision of the future, as seen through VHS goggles. A future where everything is clinical and neon. "

The year is 2007, and it’s the future – a vision of the future, as seen through the VHS goggles of a 1980s cinema goer. A future where everything is clinical and bathed in neon light. A future where the heroes are men – well cybernetically enhanced, cyborg men, at least – and the villains are fodder.

This silver tongued DLC is part pastiche of ‘80s action movies, and part self referential parody of video games, with Michael Biehn taking centre stage. If you grew up in the ’80s, you’ll likely know the name which is synonymous with action films of that generation.

After the explosive opening, the game treats you to the best, worst tutorial you have ever seen – displaying messages like, “Press X to demonstrate your ability to read” and, “Move forward to move”.

There are countless times throughout where I found myself chuckling to… well, myself, and there’s a healthy injection of humour throughout proceedings. 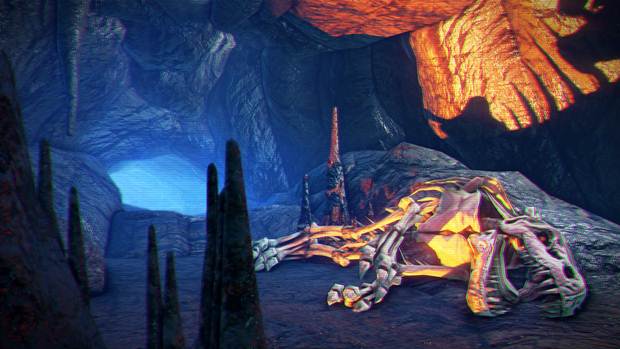 In fact, the whole game is teeming with personality, and it’s hard not to feel enraptured by it.

Instead of cutscenes, the story is displayed by 8-bit  panels, backed up by cheesy ‘80s music – recalling childhood memories of bad Jean-Claude Van Damme movies – and in retrospect, they were all bad. Yes, even Bloodsport.

Outside of the retro panels, the aesthetics are just as pretty as Far Cry 3, with primary colours dominating the screen. Cold blue buildings and neon lights pop to the foreground with a perpetual thunderstorm framing them on the horizon.

The visuals work a treat, with the bright primaries and garish lights contrasting beautifully with the constant black of night. Even the enemy garrisons have a beam of red light coming from their command centre, right into the sky, making placing waypoints almost redundant – this also means you will spend more time immersed in the game, not having to consult the map constantly.

"Even the enemy garrisons have a beam of red light coming from their command centre, right into the sky, making placing waypoints almost pointless."

The weapons fire neon tracers, and red sparks indicate the position they are landing. Your eyes are always drawn to something of import, and although the night setting means you lose the beautiful vistas from Far Cry 3’s islands, it gives this DLC a visual identity of its own.

Blood Dragon finds itself in a unique position: succeeding where other games that have attempted parody have failed. You see, if you’re going to take the piss out of something, you had better be damn sure that you do whatever you’re mocking better than the victim of your derision does.

Chances are, if you liked the combat in Far Cry 3, then you’re going to enjoy this just as much, maybe even a teeny bit more. All of the weapons feel powerful, with plenty of recoil from each shot and the enemies reacting to each hit, giving the player lots of visual cues which work synchronistically with the meaty audio of your arsenal. Special mention needs to go to the games’ shotgun, which is one of the best in any shooter I’ve seen for a long time. And I’m a strong believer that shooters can be fairly judged on the quality of their boomsticks.

The chain gun is another beast, spitting 700 rounds until you release the trigger, never overheating. As you fire, our Snake Plissken-inspired hero lets out a war cry that even Arnie would be proud of, which is just one of many little touches that I find myself appreciating. Later on in the game, you get another weapon, totally unlike anything seen in in the series before, but I’ll let you discover that for yourself – just know, it makes you feel like Superman… on steroids.

Before you ascend to beefy superhero status, though, you will find the dark of night and the length of grass are your closest allies. Yes, stealth is back, and you may have forgotten that by now, with me recounting the bombastic nature of this DLC. It’s not all ‘boom’, and the game manages to somehow make stealth even more satisfying than before. 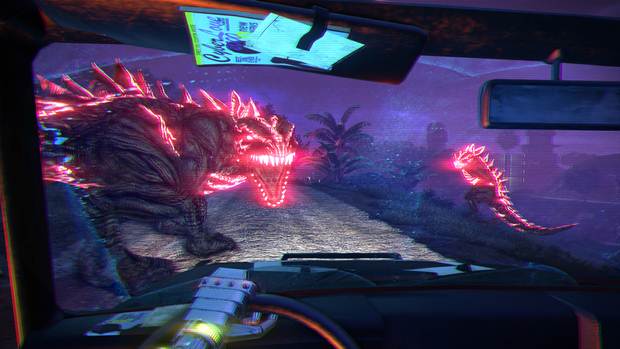 Playing as a fresh character comes with a few benefits. Firstly, you have a new progression path as you gain experience, with many of the more advanced stealth techniques open from the start – like the ability to jump down on an enemy, sinking your neon dagger into his chest, pulling it out and finishing his friend off in one smooth motion. And then you can stick your middle finger up at them.

Yes, the game has a button for vulgar gestures, which is almost as good as 5o Cent: Blood on The Sand’s ‘swear button’.

As well as some old, rarely used abilities, Rex Power Colt comes equipped with a range of new talents – being a cyborg and all. Now you can survive any fall, breathe underwater indefinitely, swim and run faster than most vehicles can move, and you also get shurikens to throw at enemies’ skulls.

These extra stealth skills come in handy when capturing enemy garrisons, as well as when completing the side quests that become available upon liberation. The garrisons are much more secure than the shanty camps that took their place in the main game, and their location more varied – with an assault on an oil rig being a highlight. The side quests come in two flavours: hunting rare animals, and rescuing scientists with sneakiness – just enough to spice things up, and pad out the extra content if you wish, with each unlocking a weapon attachment.

"You can sneak into the base and bring down the shields - this causes all nearby dragons to attack the base whilst you sit back and watch like a cyborg Attenborough."

All the core tenants of the Far Cry experience are present and correct, including mutated versions of animals dotted around the sizeable island for you to shoot. I wonder what PETA’s stance on genetically altered, cybernetic creatures is.

You can’t upgrade your equipment with their hides, but they do all carry money… because it’s a game, and it knows it is.

There is a new creature, however, that won’t be bullied easily – the titular Blood Dragons. They’re not really your typical dragon: they have poor eyesight, can’t fly, and they look like they just got back from an underground rave, which would explain their sensitivity to loud noises.

Although funky-looking and partially blind, these new animals pose a massive threat on their own, and even more so when in a pack. The presence of one of these creatures is signified by a health bar on your HUD, warning you to crouch so that you may sneak by, unharmed.

If you do manage to kill one, you’re treated with a massive fistful of experience points for your trouble. You don’t have to be antagonistic towards the dragons though, you can be friends. Well, master and thrall.

When liberating the aforementioned garrisons you can use cyborg hearts – obtained by ripping them out of your enemies’ chests – to lure the dragons to do your dirty work for you. Or, if you prefer, you can sneak into the base and bring down the shields – this causes all nearby dragons to attack the base whilst you sit back and watch like a cyborg Attenborough. Much like the main game, most of the brilliant moments come from the sandbox mechanics working with the volatility of the AI to produce emergent moments, completely unique to each player. My personal favourite came from heading towards a garrison and happening upon a pitched battle on a grassy verge. There was an inferno raging whilst the two factions exchanged fire, and I stood and watched a mutated cassowary run through the flames and kick the shit out of everyone.

"This short, self-contained story, manages to put many boxed releases to shame. "

Or was my favourite moment when I saved a scientist, only for him to fall off a cliff after I completed the mission. It’s ok though, as the next one got mauled by a disco tiger – be prepared for the mountain of unintelligent game design editorials.

It manages to blend sandbox elements like this with the strict linearity of some of the main missions, and succeeds. It even breaks the fourth wall on occasion, with a rant about video game violence being a highlight – just remember, kids: genocide is fun. And it’s all held together with one of the strongest final acts I’ve seen for some time.

My point is: these are my favourite moments, but yours will be completely unique to you. The only advice I have for you is to take your time – take over all the garrisons, complete every side quest, unlock every attachment – and most importantly, bask in the game world. If you don’t heed this advice, it will be over in the blink of an eye – it is DLC, after all. And that’s easy to forget, as this short, self-contained story, manages to put many boxed releases to shame. A must buy for anyone who likes stealth, shooting things, and fun.

The impatient player is in for a short ride.

Final Verdict:
EDITOR’S CHOICE
One of the most unique pieces of downloadable content available, which hopefully paves the way for more developers to take risks with existing IPs, rather than resting on their laurels. A must buy for anyone with even a vague interest in shooters.
A copy of this game was provided by Developer/Publisher/Distributor/PR Agency for review purposes. Click here to know more about our Reviews Policy.