Perhaps one of the biggest titles to ever hit the Playstation Network – Fat Princess, a game developed by Titan Studios, and was released on July 30, 2009.

Let me start by saying that Fat Princess is a very unique experience, yes we have already seen and played many types of capture the flags and class based games, but Fat Princess is different, for the simple fact that it just does everything differently.  For example picking a class, classes are your standard Warrior, Mage, Priest, Ranger and Worker.  Picking the class is not just choosing and clicking, in Fat Princess every class has its own building, each building produces hats which represent the certain class, all you have to do is pick up the hat and you will be that class. But there’s more, if you decide to choose a warrior, and you killed someone, you can pick up his hat and change class while in a battle, this is because every person you kill drops their hat.  But that’s it right? Nope! Every class can be upgraded as well, and the only ones who can do it are the Workers, the Workers job is to collect resources so they can build or upgrade buildings, and if you have enough materials, you can upgrade a certain class, which gives the class a new weapon and outfit. 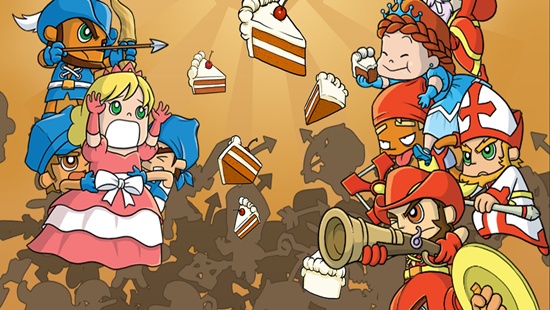 All they do is eat cake… and we still save them?!

Fat Princess is very unique art wise as well, It’s cartoon graphics are perfect for the goofy story and characters, and similar to Team Fortress 2, though the game might be cartoony, don’t be fooled, for the game is very violent and bloody, blood will be spilled everywhere, and hands, feet, and other body parts will be splattered all over the floor. But for those worrying parents, Titan Studios is a very parent friendly, you can turn on and off all the blood and gore.

The  game also offers a lot of different maps and game modes, there is “The Legend of Fat Princess”, which is the campaign of the game, don’t expect to be blown away story wise, the story in Fat Princess might be one of the worst, and the narrator makes it feel like he is reading a bedtime story to his son, but i guess its understandable.  You can choose to “Mess About” which is just like a costume game with bots, and “Gladiate” which is survival mode with all the different classes.  Fat Princess offers 4 game types which are “Rescue The Princess”, “Snatch ‘n Grab”, “Team Deathmatch”, and “Invasion”, personally, they are all pretty much similar, i mean Rescue the Princess and Snatch ‘n Grab are basically the same game except for the number of times you have to capture the princess, and Team Deathmatch is also the same thing, the princess just isn’t’ there for you to take, Invasion is a bit different because the goal is to capture all the outposts (Control Points) to win the game. 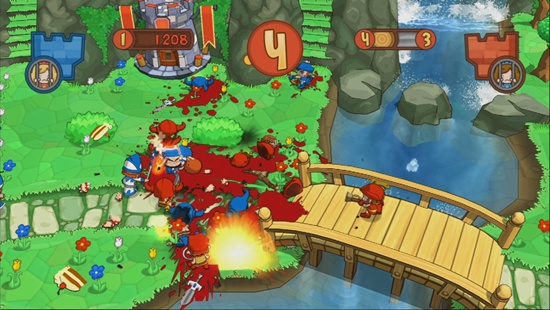 The game isn’t perfect though, in fact it has a lot of negative stuff.  Firstly, the game can get boring, and it will get boring, either if its you trying to capture the princess for 2 hours, or just doing the same thing over and over again, it can get boring, which is also why i think there isn’t a lot of replay value. Sure the trophies add something to the game, but most of the trophies are just too damn hard and will take too damn long to achieve that you won’t even bother starting just because you wouldn’t want to play that much.

Now lastly there is online multiplayer, it doesn’t differ from the anything, except its against real people, i found myself playing the online only a few times, and not even finishing it for the fact that i just got bored because capturing the princess in online is impossible, but my point is that its just the same thing, over and over again, and i don’t see my self playing a lot of the online. 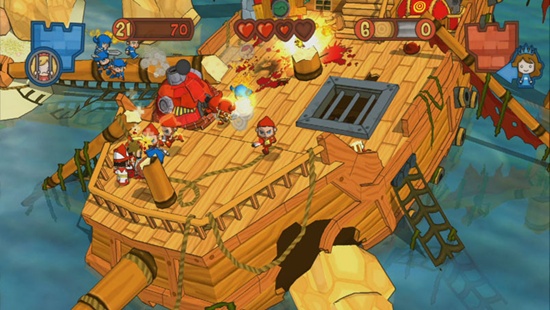 This is what the buildings and hats look like

Oh, and did I mention that the game has the best credits ever? Well just to let you know, another unique thing is, you actually play the credits and the grim reaper, killing everyone that comes in your way, and those who come in your way, have the names of the people in the credits- how awesome is that?

Online multiplayer isn't great, AI is dumb, You will get bored after a while.

Fat Princess is a very unique and fun experience that everyone should try, but it can make you bored at times, and it will.

A copy of this game was provided by developer/publisher for review purposes. Click here to know more about our Reviews Policy.
Tagged With: fat princess, ps3, PSN, Titan Studios