Posted By George Reith | On 08th, Jul. 2012 Under Reviews | Follow This Author @GNReith

As a self-professed lover of all things anime and most decent JRPGs, I was surprised that I received a review copy of an animé style role playing game I hadn’t heard of. As someone who is obsessed with tracking down underrated RPGs, a game I haven’t heard of normally means it’s probably not worth knowing about. Thus I settled down to play what would know doubt be a dull and uninspired dungeon crawler. Six hours later and Fate Extra has kicked my expectations right out of the water and proven to me that there are still exciting new titles slipping under the hype radar every day, regardless of how “in the know” you think you are.. Whether you’ve heard of Fate Extra before or not, any self-respecting RPG fan with a PSP should definitely check it out. 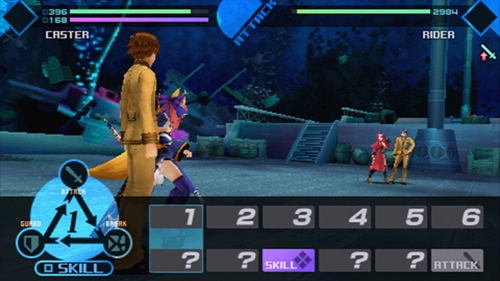 Though the combat is an accessible affair, depth is added by Fate’s heavy focus on information gathering

Fate is set in a near-future setting where various hackers are attempting to gain control of the Holy Grail of Arthurian legend. The story revolves around you as a school student with no memory of your life before your school days. You eventually uncover that the school is a front for this Holy Grail war, and are thus permitted to join in the historically charged war time shenanigans. You’re given a servant, a powerful incarnation of a historical figure who you use to fight, and are told you must kill or be killed against the 127 other combatants in the war. The raw scenario alone isn’t hugely innovative, but it draws on a lot of solid influences to create a unique tone. It feels something like what would happen if Persona 3, Battle Royale and Ghost in the Shell all had a kid together. Pitting you against fellow students gives the story a certain bite and edge to it, and the characters of Fate have enough personality to keep you interested in what will happen next successfully throughout.

There are a few issues with the narrative however, albeit minor ones. For every nail biting moment of tension, there are also moments where the pace manages to completely flounder. The sad thing is that narrative pacing gets off to a rocky start from the very beginning. You play an alternate character who is unable to uncover the Holy Grail War within the school and thus perishes. This is an interesting, though seemingly irrelevant, way to begin the story, but it means you have to play for at least 45 minutes before you get to actually handle any of the game’s mechanics. The story is capable of rinsing emotional highs from the player as if they were a sponge, but it certainly doesn’t manage to maintain these lofty heights with much consistency. 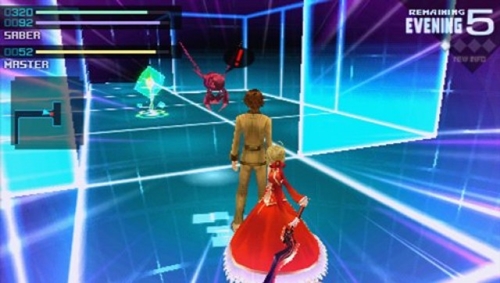 The dungeons offer a way to bolster your character’s levels, but other objectives keep the grind from getting repetitive

Once you’ve managed to endure the game’s prologue, Fate introduces you to its combat mechanics. Fate at first seems shallow on account of its combat, but this first impression turns out to be mistaken as you learn of the depth provided by the system. Rather than the player and opponent commanding their servants to fight alternately, both servants attack each other at the same time. The player can order them to perform one of three attacks that form a rock paper scissors style triangle. If you command your warrior to guard as the opponent chooses a basic attack, you win and are able to counter for full damage. If you guard and they use a powerful break attack though, they break through your block, causing your servant to take the full brunt of the attack. Things heat up, as three successful strikes in a row allow a combatant to launch an extra, more powerful attack for free. Though shamelessly simple, the mechanics later become bolstered by the skills you and your servant can learn to alter the tide of battle.

My initial concern with the battle system was the seemingly random nature of it, something that is alleviated by Fate’s cunning focus on intelligence gathering. The basic format of the Holy Grail War you fight in is that two combatants are paired against each other and must fight to the death at the end of the week. You are thus given the week before to gather information on your opponent and to train up in the arena against various monsters to ensure you are a high enough level to match your opponent. Defeating the arena monsters enough slowly gives you clues as to what attacks they will make each turn, and you can get a similar advantage over your Holy Grail opponent if you can gather enough information on them and their servant. It gives the battles more of a tactical staying power, and means you’re doing a little bit more than just grinding in preparation for the next boss each week. 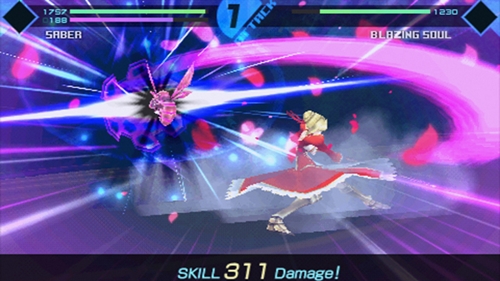 The anime style visuals may not be to everyone’s taste, but damn do they look good.

When you do wind up getting to the end of a particular week, it can be quite thrilling to engage in the final showdown with your opponent. The “boss fights” are built up quite well, and they often hit the sweet spot in regards to challenge. Outside of the boss fights though, the difficulty can go awry, with some odd jumps in difficulty at later stages. Part of the frustration caused by this is compounded by some archaic design, as the text heavy dialogue cannot be skipped and death in battle takes you back to the last time you saved the game. Dying at the same place a few times later on in the game can be hugely frustrating due to this and, whilst it gives death a powerful significance, it can be very annoying. It’s a shame such design elements feel so out of place amongst a lot of thoughtful gameplay choices; small things like fast travel within the school hub area and telling the player the recommended level for the end of week elimination battles are helpful features that are let down by the irritating lack of checkpoints.

As far as presentation goes, the animé style aesthetics are likely to garner a love or hate response from players. The hand-drawn sprites, Japanese only voice clips and occasionally androgynous character designs will either be a dream for Japanophiles or a nightmare for those who want something more western-centric. Should you fall into the latter category, it would still be wise to persevere with Fate Extra, as the quirky soundtrack, satisfying sound effects and crisp visuals are a universal delight that all types of players should be able to appreciate.

Overall, if you have even the slightest interest in animé or JRPGs, you owe it to yourself to play Fate Extra. The somewhat clichéd title and art direction may mean the title goes under the radar for many, but Fate is an undoubtedly polished title that overcomes its occasional hiccups with its engaging story and tight gameplay mechanics. A fairly non-linear sense of progression adds to an already hefty lifespan, meaning that Fate is definitely worth the asking price in terms of both quality and quantity.

Story has occasional pacing issues, Fells more non-linear than it actually is, Odd spikes in difficulty

A copy of this game was provided by developer/publisher for review purposes. Click here to know more about our Reviews Policy.
Tagged With: Fate Extra, psp